Welcome to the Official Blog Tour + Giveaway for Alane Adams' The Blue Witch, the first title in the Witches of Orkney series! Today, on our tour stop, we have an exclusive excerpt to share! So... Check it out and grab your copy now!!! Don't forget to follow the tour, HERE! 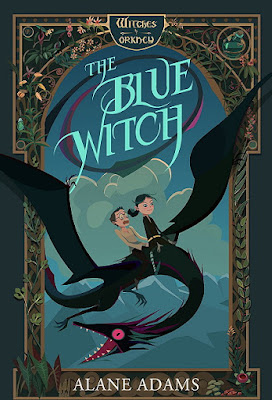 Synopsis:
Before Sam Baron broke Odin's curse on the witches to become the first son born to a witch and the hero of the Legends of Orkney series, his mother was a young witchling growing up in the Tarkana Witch Academy. In this first book of the prequel series, the Witches of Orkney, nine-year-old Abigail Tarkana is determined to grow up to be the greatest witch of all, even greater than her evil ancestor Catriona. Unfortunately, she is about to fail Spectacular Spells class because her witch magic hasn't come in yet. Even worse, her nemesis, Endera, is making life miserable by trying to get her kicked out.

When her new friend Hugo's life is put in danger by a stampeding sneevil, a desperate Abigail manages to call up her magic―only to find out it's unlike any other witchling's at the Tarkana Witch Academy! As mysteries deepen around her magic and just who her true parents are, Abigail becomes trapped in a race against time to undo one of her spells before she is kicked out of the coven forever!

Rich in Norse mythology, The Blue Witch is the first of a fast-paced young reader series filled with magical spells, mysterious beasts, and witch-hungry spiders!

*Excerpt*
One of my favorite scenes is actually the opening scene where we meet Abigail! I love reading it to kids and talking about how well we get to know her in just a few short lines. She’s holding her chin high which means she’s trying to be brave. She’s telling herself not to cry, which means she really wants to. And when she says, “honestly, it doesn’t bother her she doesn’t have a mother,” we know immediately that she’s lying! Plus, we get to see her be bullied by Endera, which helps kids connect to her character and feel empathy for her.

Abigail marched toward the iron gates of the Tarkana Fortress, holding her chin high. She wasn’t going to cry, not today, even though Old Nan had tied her braids so tight her scalp stung.
The Creche wasn’t her home anymore.
The other girls had been fawned over by proud mothers as they gathered their things and tried on crisp new uniforms.
Abigail had sat on her bed, waiting quietly.
Honestly, it didn’t bother her that she didn’t have a mother. A witch didn’t have much use for one.
Newborn witchlings were left at the Creche to be raised by lesser witches like Old Nan. Mothers visited three times a year: once on Promotion Day, again on a girl’s birthday, and a special visit on Yule Day, when they would bring a small gift and drink cinnamon cocoa by the fire.
Those days, Abigail hid in the shadows, watching as the other witchlings glowed under the attention of these strange and powerful creatures.
At age nine, witchlings were sent off to the famed Tarkana Witch Academy, inside the coven’s walled fortress, to be trained in the art of witchery.
She came to a stop outside the entrance, gripping her small valise in one hand. Gloomy clouds had gathered in a knot overhead. Her new uniform itched her neck, and she tugged at the collar.
All she had to do was take two steps, and she would be inside the gates and on her way to becoming a great witch.
She tried to slide her foot forward, but it stubbornly remained stuck in place.
A pair of girls rushed past, practically flying through the open gates.
Glaring down at her foot, Abigail whispered, “Don’t be a silly droopsy-daisy. Today is a new beginning.”
Her foot wavered in the air like a dowsing rod, but before she could take the step, someone shoved her to the ground.
“Outta my way!” a stout-faced witchling bellowed. A lanky girl skulked alongside her.
Glorian and Nelly. The two were part of a trio that stuck together like tree sap in summer. Which meant . . .
Yep.
Behind them, a girl sailed along with her nose in the air as if she were royalty. Endera. The most horrible witchling in the entire Tarkana coven.
Endera paused to smile sweetly down at Abigail. “Aren’t you clumsy as a blind sneevil?”
The other girls snickered, and the trio swept on through the gates.

Praise for THE BLUE WITCH

**About the Author**
Alane Adams is a children’s author, professor, and literacy advocate. She is the author of the Legends of Orkney fantasy mythology series for tweens; she also writes Early American picture books for young children. Adams lives in Southern California. 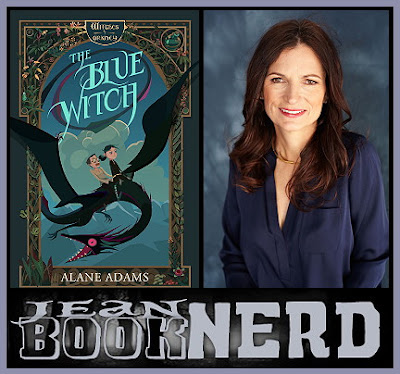 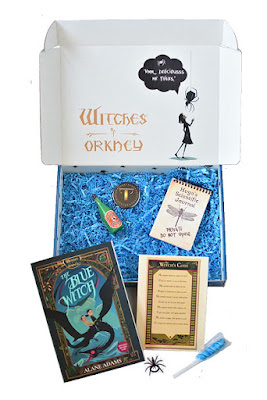