RELEASE BLITZ: The Problem With Forever by Jennifer L. Armentrout

We are totally stoked to kick off this week-long Release Blitz for Jennifer L. Armentrout's The Problem With Forever!

For some people, silence is a weapon.

Growing up, she learned that the best way to survive was to say nothing. And even though it’s been four years since her nightmare ended, she’s beginning to worry that the fear that holds her back will last a lifetime.

Now, after years of homeschooling with loving adoptive parents, Mallory must face a new milestone—spending her senior year at public high school. But of all the terrifying and exhilarating scenarios she’s imagined, there’s one she never dreamed of—that she’d run into Rider Stark, the friend and protector she hasn’t seen since childhood, on her very first day.

It doesn’t take long for Mallory to realize that the connection she shared with Rider never really faded. Yet the deeper their bond grows, the more it becomes apparent that she’s not the only one grappling with lingering scars from the past. And as she watches Rider’s life spiral out of control, Mallory must make a choice between staying silent and speaking out—for the people she loves, the life she wants, and the truths that need to be heard.

Prologue
Dusty, empty shoe boxes, stacked taller and wider than her slim body, wobbled as she pressed her back against them, tucking her bony knees into her chest.
Breathe. Just Breathe. Breathe.
Wedged in the back of the dingy closet, she didn’t dare make a sound as she sucked her lower lip between her teeth. Focusing on forcing every grimy breath into her lungs, she felt tears well in her eyes.
Oh gosh, she’d made such a big mistake, and Miss Becky was right. She was a bad girl.
She’d reached for the dirty and stained cookie jar earlier, the one shaped like a teddy bear that hid cookies that tasted funny. She wasn’t supposed to get cookies or any food by herself, but she’d just been so hungry that her tummy hurt, and Miss Becky was sick again, napping on the couch. She hadn’t meant to knock the ashtray off the counter, shattering it into tiny pieces. Some were shaped like icicles that clung to the roof during the winter. Others were no bigger than chips.
All she’d wanted was a cookie.
Her slender shoulders jerked at the sound of the all cracking on the other side of the closet. She bit down harder on her lip. A metallic taste burst into her mouth. Tomorrow there would be a hold the size of Mr. Henry’s big hand in the plaster, and Miss Becky would cry and she’d get sick again.
The soft creak of the closet door was like a crack of thunder to her ears.
Oh no, no, no…
He wasn’t supposed to find her in here. This was her safe place whenever Mr. Henry was angry or when he—
She tensed, eyes peeling wide as a body taller and broader than hers slipped inside and then knelt in front of her. In the dark, she couldn’t make out much of his features, but she knew in her belly and her chest who it was.
“I’m sorry,” she gasped.
“I know.” A hand settled on her shoulder, the weight reassuring. He was the only person she felt okay with when he touched her. “I need you to stay in here, ‘kay?”
Miss Becky had said once that he was only six months older than her six years, but he always seemed so much bigger, older than her, because in her eyes, he took up her entire world.
She nodded.
“Don’t come out,” he said, and then he pressed into her hands the redheaded doll she’d dropped in the kitchen after she broke the ashtray and rushed into the closet. Too frightened to retrieve her, she’d left Velvet where she had fallen, and she’d been so upset because the doll had been a gift from him many, many months before. She had no idea how he’d gotten Velvet, but one day he’d simply shown up with her, and she was hers, only hers.
“You stay in here. No matter what.”
Holding the doll close, clenched between her knees and chest, she nodded again.
He shifted, stiffening as an angry shout rattled the walls around them. It was her name that dripped ice down her spine; her name that was shouted so furiously.
A small whimper parted her lips and she whispered, “I just wanted a cookie.”
“It’s okay. Remember? I promised I’d keep you safe forever. Just don’t make a sound.” He squeezed her shoulder. “Just stay quiet, and when I…when I get back, I’ll read to you, ‘kay? All about the stupid rabbit.”
All she could do was nod again, because there had been times when she hadn’t stayed quiet and she’d never forgotten those consequences. But if she stayed quiet, she knew what was coming. He wouldn’t be able to read to her tonight. Tomorrow he would miss school and he wouldn’t be okay even though he would tell her he was.
He lingered for a moment and then he eased out of the closet. The bedroom door shut with a smack, and she lifted the doll, pressing her tearstained face into it. A button on Velvet’s chest poked at her cheek.
Don’t make a sound.
Mr. Henry started to yell.
Don’t make a sound.
Footsteps punched down the hall.
Don’t make a sound.
Flesh smacked. Something hit the floor, and Miss Becky must have been feeling better, because she was suddenly shouting, but in the closet the only sound that mattered was the fleshy whack that came over and over. She opened her mouth, screaming silently into the doll.
Don’t make a sound. 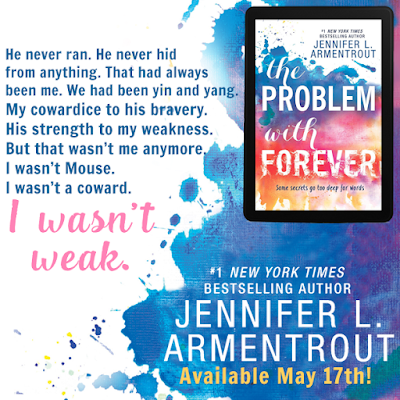 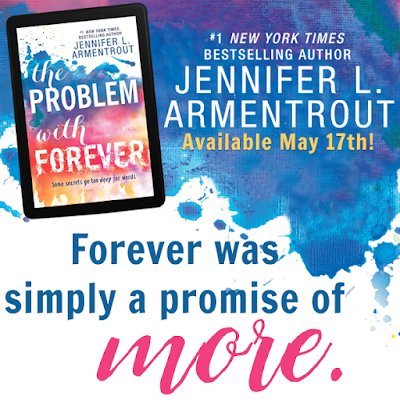 Praise for The Problem With Forever

“The intensity between Mouse and Rider is palpably sizzling… romance aficionados [will] lose themselves in Mouse and Rider’s smoldering glances and steamy kisses.” –Kirkus

“Armentrout’s effort to gradually coax her protagonist from her shell via a supportive, loving community succeeds, and readers looking for an inspirational comeback story will find Mallory’s to be satisfying and hopeful” –Publishers Weekly 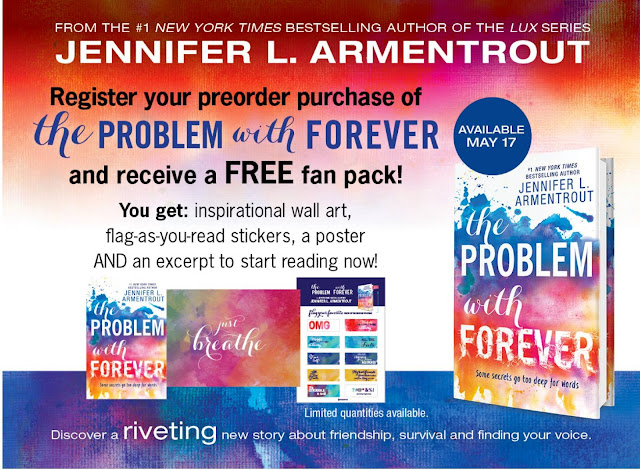