Based on the manga series by:
Koama Yuuki

Plot Summary:
Staz is the vampire boss of a section of the demon world, but he has little interest in human blood. He's more infatuated with Japanese culture. When he learns that Yanagi Fuyumi, a Japanese teenage girl, accidentally wanders into the demon city, he jumps to the occasion. However, while Staz deals with an intruder on his turf, the oblivious Fuyumi is killed by a monster of the same type and becomes a wandering ghost. The disappointed Staz vows to Fuyumi that he will find a way to bring her back to life. [Source: http://myanimelist.net/anime/11633/Blood_Lad] 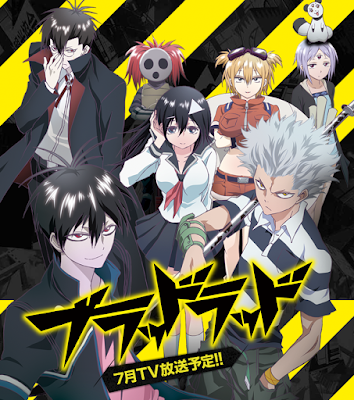 Seeing Blood Lad in December 2015 and writing a review about 3 months later, I am sorry to admit that it does not leave a long lasting impression on me. To start off with the opening credits, it seems like a random compilation of characters who will appear in the anime but upon closer inspection we can get most of, if not everything, about the 10-episode series. To list a few of the obvious things: Staz, Wolf, and Fuyumi, are the main characters; Fuyumi is trapped in a ghost form with blood thirsty demons coming after her and slowing disappearing along the way, Staz likes to show off his power, and two other characters with a tangible aura appear symbolizing some type of relationship to Staz.

Since Blood Lad is 10 episodes, it only seems natural for the story to be rushed to the point where it will give its audience a tepid resolution. The only character development the audience sees is a little about Fuyumi’s past and Staz’s full potential. This short anime leaves off, where Staz fully admits to wanting to protect/revive Fuyumi… and that’s it. The other characters that appear such as Wolf only add a comedic effect to the series, considering he and Staz are former friends, and the anime continues to play off of these small instances of comedy throughout the series. As a seinen anime, it didn’t have long-term serious tones therefore, coming back after a 3-month break, made me believe it was a shonen anime instead. Blood Lad in short is a very stereotypical boy’s anime including busty females, a sudden power up in the male protagonist, a hot-headed rival/best friend, and some type of antagonist that wants power. It leaves much to be desired. If the anime series continued for a second season, however, I think it would have great potential for idealistic or political messages.
My Rating:

Posted by Mariah Bonifacio at 11:16 AM