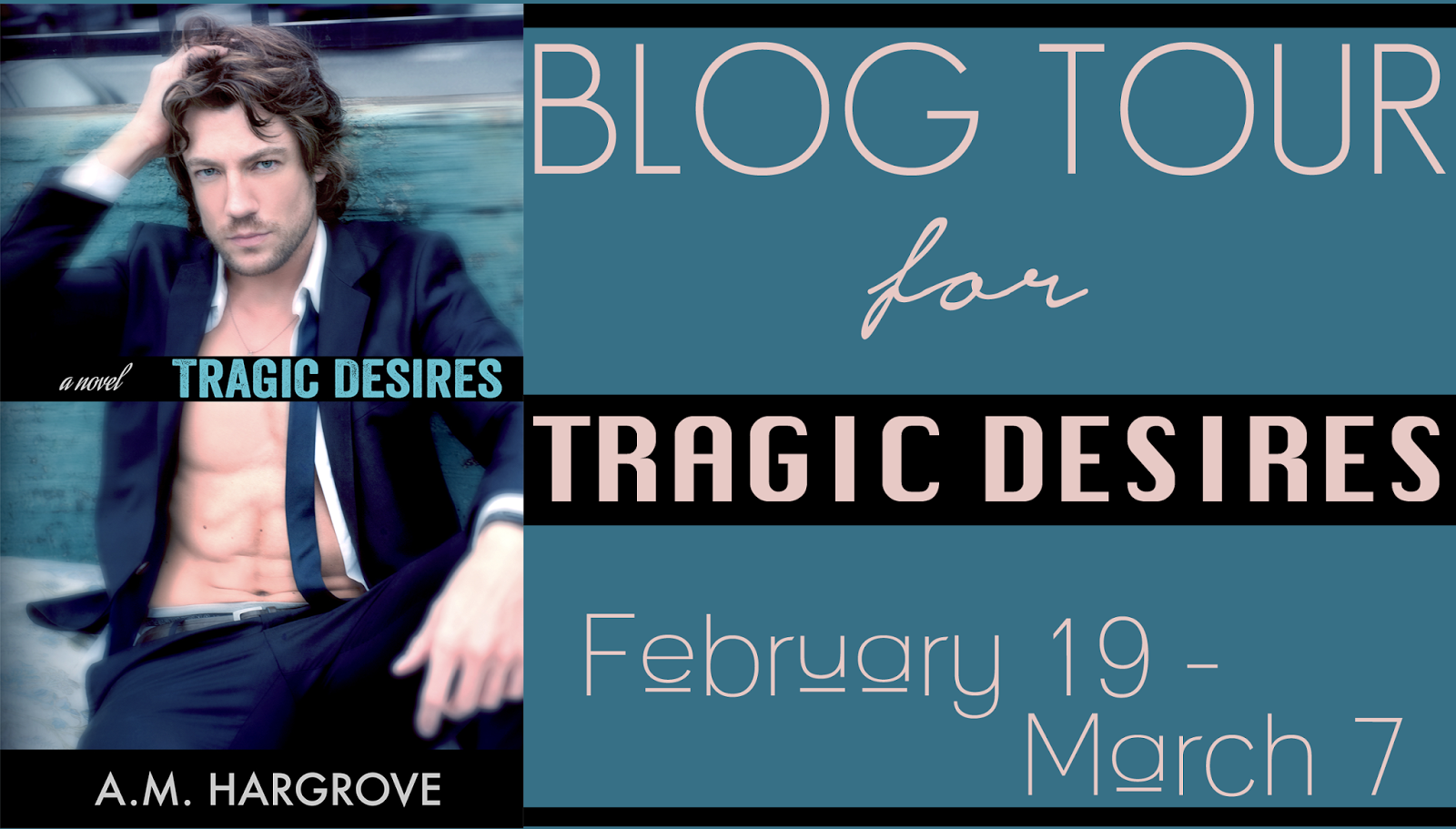 Welcome to the Official Blog Tour for Tragic Desires, #2 of the Tragic series, by A.M. Hargrove. 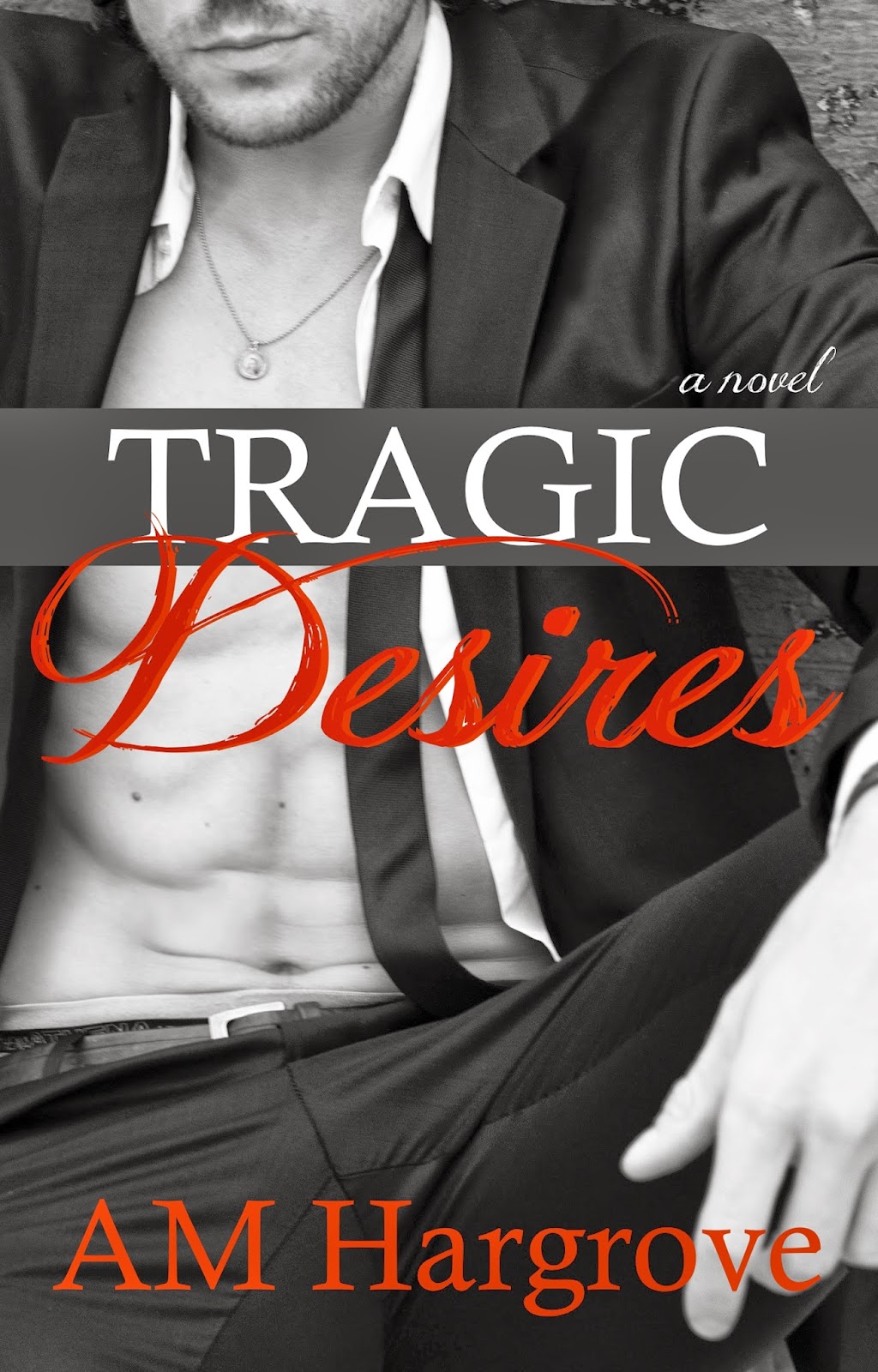 Synopsis:
**This is a Stand Alone Companion Novel to Tragically Flawed**

My name is Gemini Sheridan. At least that’s what I thought it was for 23 years. Then one day a slight adjustment on the wheel of my mountain bike set into motion a series of catastrophic events that changed my life forever. Now I’m running from the headaches that threaten to destroy me… from the assassins that threaten to kill me… from the truth that exposes who I really am… and from the man that wants to save me. Because he now owns my heart and I fear him above all others.

My name is Drexel Wolfe and I’m a private investigator. Nothing ever stands in the way of what I want because when I see something I just take it. All of that changed the night my life collided with Gemini Sheridan’s and now everything is one hot damn mess. And the worst part of it all is that I’m trying to save her ass and I don’t know why the hell I’m even bothering. Well, that’s not exactly true. Fact is, I can’t stop thinking about her. She’s crawled into every thought I own, asleep or awake. I have serious plans for her that include making her mine. What she doesn’t know is that when I play, I play for keeps. Nothing and no one will get in my way or stop me… not even Gemini Sheridan herself.

**Tragic Desires is NOT part of a series, but Drexel Wolfe, the main character, was first introduced in Tragically Flawed.**

For a limited time only! 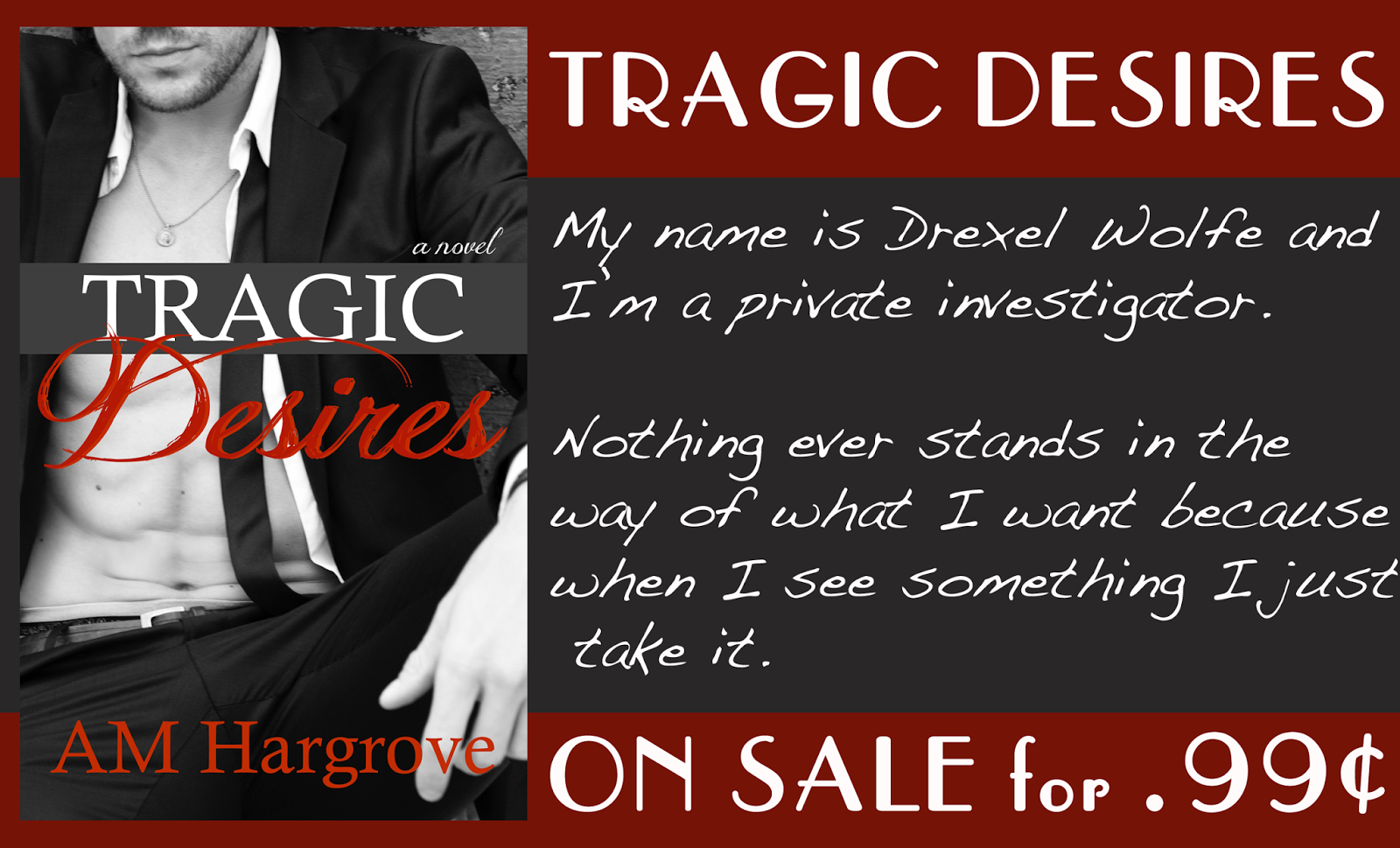 *Excerpt*
Tragic Desires Excerpt 2—Explicit Language
“Delta Mad Dog, do you have sight on Onyx?”
“Affirmative. She’s moving to the back of the room.”
“Copy that.”
I scan the back of the room and head in that direction. I don’t catch a glimpse of her anywhere but I also don’t want to be too obvious. My senses are on high alert.
My mike crackles then and I hear Dylan say, “Lone Wolf, two birds have flown the coop. You copy?”
“Copy. I’m on the move.”
Now my pretense is over. My steps have purpose to them and they take me to the women’s restroom. Not bothering to knock, I push open the door to a group of surprised faces, none of which belong to Onyx Eyes. All the stalls are closed, so I crouch down, inspecting the shoes, looking for those telltale cowboy boots.
“Hey, what do you think you’re doin’ in here?” one of the women asks.
I don’t answer but I survey the place, looking for any escape route. There are no windows so the door is the only way in or out. They must’ve taken her out the back.
“Delta Mad Dog. Back alley.”
“Copy that.”
Sure enough, I bust through the back door, and they have her as she twists and struggles to get away. She never would’ve succeeded without my intervention, because right as I open the door, I see one of them inject something into her neck. By the time I get to them, she’s limp as a rag.
“Let her go. Now.”
They eye me for a second and take off running. I want to give chase, but my first concern is the girl. By the time Dylan arrives, I’m tending to Onyx Eyes.
“Shit. Good thing you called that, Drex.”
“Seriously. They hit her with something, though, right as I opened the door. On top of what she already took, she’ll probably be out for a while. We’d better let Colt know.”
“Right. What happened to them?”
‘They took off.”
“Damn!”
“Eagle One, Lone Wolf here. I have target. Do you copy?”
“Copy, Lone Wolf. What’s your position?”
“Alley behind Red Skies. The two birds drugged her and took off when I intercepted them.”
“Shit. Sending someone over now for pick up.”
“Copy, Eagle One.”
Dylan grabs her wrist, feeling for a pulse when our radios crackle again. It’s Colt.
“Lone Wolf and Delta Mad Dog, Eagle One here. Abandon operation. I repeat. Abandon operation. You’ve got six, I repeat, six birds of prey surrounding you, of unknown ID. Get out of there!”
“Lone Wolf here and that’s a negative. Target is down. Unconscious. Cannot abandon.”
“Drex, get the fuck out of there.”
“I said no!”
Then I turn to Dylan and say, “Leave. Now. I’ll take care of her. Just tell them to try to pick me up somewhere.” He gives me a hard look. “It’ll be easier for me if I only have her and myself to worry about. Now go.” He nods and disappears.
Whoever is closing in wants this girl, and something inside me is willing to go beyond the norm to help her. Yes, I’ve been trained for this. But there’s something else about her that begs to be saved. Call it intuition. Or call it my dick. Whatever. My arm coils around her waist and I toss her over my shoulder. She only weighs about one fifteen, if my guess is accurate.
“Eagle One, direct me the hell out of here.”
“You’ve got one block in any direction before you’re in contact so don’t use any streets. Back alleys and between buildings are your only options now.”
“Copy. Lead the way.”
And he does. I follow his directions and run as hard as I can, avoiding main streets, until he tells me I’m clear. Then he instructs me where to go for my pickup. When I get there, one of the guys is waiting in a black Tahoe. I toss my target in first and then hop in behind her as he speeds away, taking us back to our hotel.