RELEASE DAY BLITZ: King of Ruin by May Sage

Today, we have a release day blitz for May Sage's King of Ruin, the first title in the Lords of Sidhe trilogy! To celebrate this release, we have an exclusive excerpt AND a blitz-wide giveaway to share! So... Be sure to grab your copy now!!! 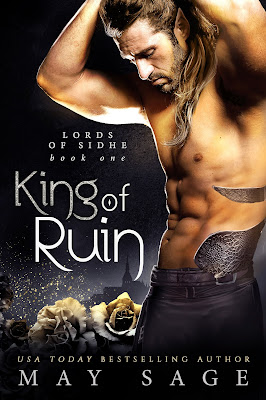 Synopsis:
They say the fae used to take the most beautiful maidens and make them their brides.
They lied.
What they do with them is much worse.

After the seven lords of Sidhe are massacred in one day, the thrones of the fae realm pass down to their heirs.
The Iron Circle remains leaderless, as its true lord lives in another world.
The nobles of the realm will find the heir, and they will destroy him.
Or her.

West, in the Silver Circle, a new lord has taken the throne.
A warrior who never hesitates to crush ants for the good of the world. A man whose rule will change the fate of their realm.

Melpomene has never known where she came from, and after centuries, she’s stopped caring.
Until the fae take her, dragging her to a land where bloodlines and power is everything.
To survive, she needs to embrace the monster buried inside.

Lords of Sidhe is a fantasy romance trilogy.
Note that while it is unsuitable for sensitive or clean readers, there is no trigger warning.

*Excerpt*
“I warned you I could not protect you.” The boy winced as she bent forward to his ear. "So, stay close and you may just survive.”
Caim paused. He’d been mistaken. This wasn’t weakness. This wasn’t naivety. She was simply certain, absolutely certain, that she was in no danger here.
That she'd made it five minutes without any weapon had surprised him. Now, it didn't.
Tired and spent as she was, her every move was fluid and precise. A Gaian darkling came from the side with a blade; she tilted her pelvis forward, and the blade hit air. She reached for the attacker's hand and pushed it back to his skull, all the while avoiding another hit on her left shoulder.
Water.
She moved like water.
If she'd had a sword in her hand, Caim knew she could have made short work of all the prisoners, and most of the lords, no doubt. But she seemed content to let them murder each other, simply defending herself—and the boy holding on to her like the lifeline she was.
His lips parted and a delighted laugh escaped him. He laughed like a child, with enchantment, astounding himself and anyone who was paying attention to him.
She didn’t spare the boy another glance, but she let him stick to her. Grace and indifference. She was cruel. Cruel, untouchable, and beautiful.
They were supposed to watch slaves butcher each other. Instead, they were graced with a dance worthy of a fairy queen. 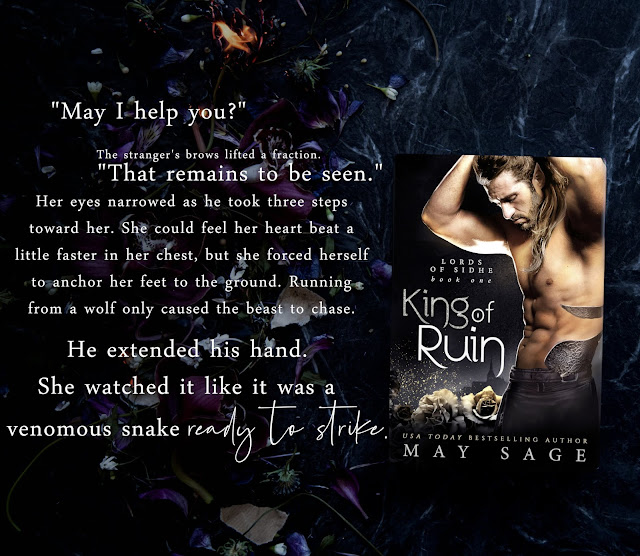