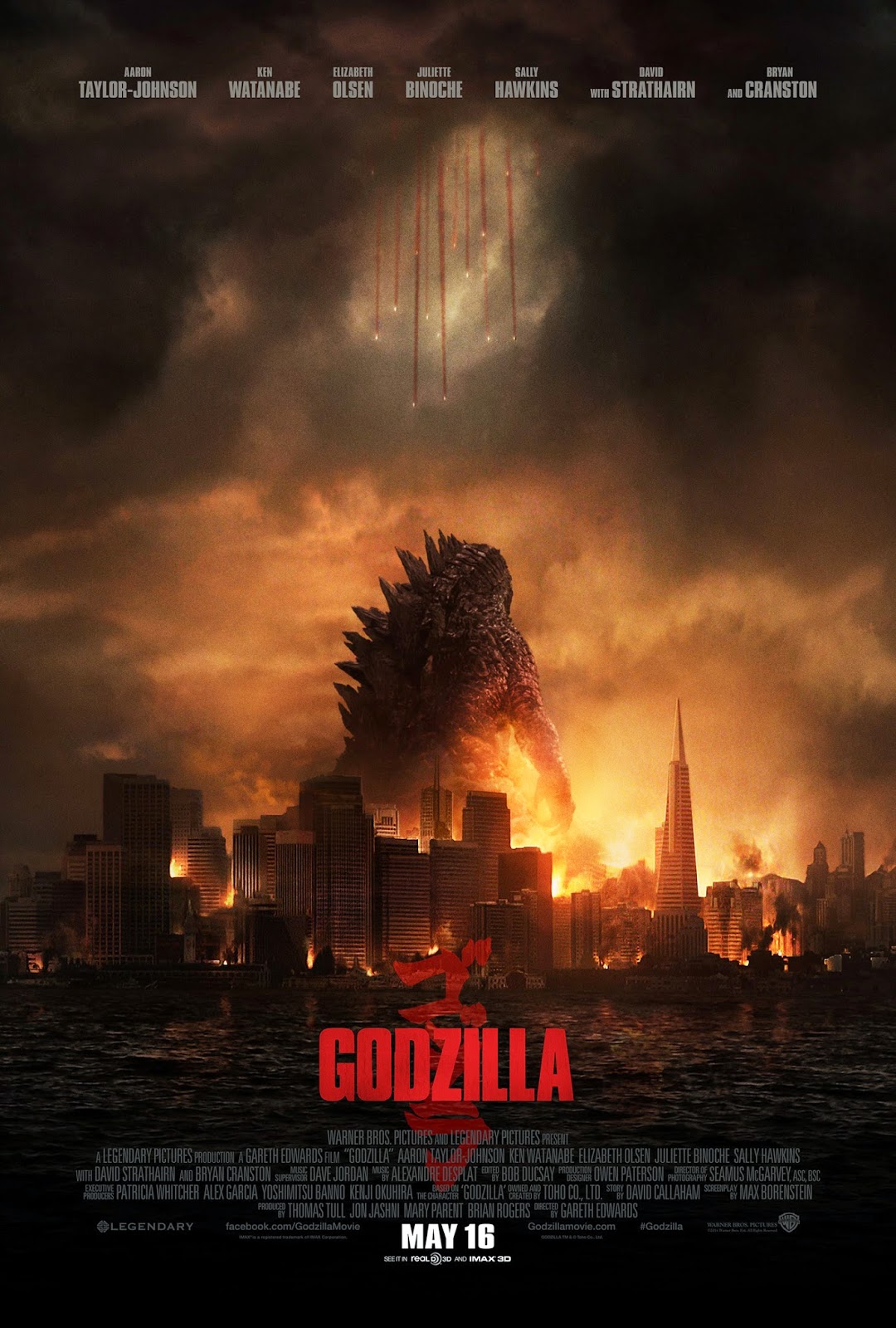 Plot Synopsis:
In Summer 2014, the world's most revered monster is reborn as Warner Bros. Pictures and Legendary Pictures unleash the epic action adventure Godzilla. From visionary new director Gareth Edwards (Monsters) comes a powerful story of human courage and reconciliation in the face of titanic forces of nature, when the awe-inspiring Godzilla rises to restore balance as humanity stands defenseless.

Godzilla (2014) is certainly a step up from the 1954 and 1998 films in both story and, of course, visuals because a colossal lizard is not just some monster terrorizing the cities. Godzilla (2014) starts in 1999 Philippines where a uranium mine reveals gigantic bones. Sometime later in Janjira, Japan a M.U.T.O. or Massive Unidentified Terrestrial Organism enters a nuclear power plant causing seismic activity. Subsequently, the seismic activity kills the mother of one of the main characters, Ford. Skip ahead fifteen years later, a winged, giant terrestrial hatches from a chrysalis that has been feeding from the power plant. At this point in the movie, say thirty minutes in, I wonder where Godzilla is. The fascinating thing about Godzilla (2014) is that the story follows the perspective of different main characters, such as Dr. Ishirō Serizawa from the Monarch organization, Ford a U.S. Navy explosive ordnance disposal officer, his wife and nurse Elle Brody, but most importantly Godzilla. It gives the viewer the entire story with the other terrestrials but because of the different perspectives, I feel like the film is slow.

Throughout Godzilla (2014), the U.S. Navy along with Monarch scientists chase after the winged terrestrial by following Godzilla who is also chasing it. It’s a perfectly linear story with sub stories connecting to it, but this brings in a problem, “can we get more Godzilla?” But wait, if the U.S. Navy, Monarch, and Elle were not distraction enough, there is another terrestrial in Nevada that is going to mate with the first terrestrial. The terrestrials are simply the catalysts to make Godzilla appear. It takes a total of fifty-five minutes for Godzilla to truly appear in his own movie. But thanks to the terrestrials, Godzilla (2014) establishes the big guy as a benevolent protector or maybe Godzilla was just there because he’s bored. He only appears to fight, defeat the other giants, and then he simply leaves. The suspense is in the film, where we want to see more of the monsters that have inhabited the Earth, but we only get a few glimpses or close ups just as they are about to fight. It focuses more on the people follow in the film rather than establishing how devastating the M.U.T.O really are. The best view of Godzilla and the other terrestrials the viewer will get is the aftermath of his fight while he’s asleep.

Overall, Godzilla (2014) paves the way for the MonsterVerse to spread and expand. If I had a ajor complaint, it would be that the film could focus more on Monarch and Godzilla himself, so the viewer doesn’t get lost in the different perspectives. Although it is slow and may have too many characters, which the viewer may or not remember, it certainly sets high standards for other giant monster movies in terms of destructive force and mystery.

Posted by Mariah Bonifacio at 10:22 AM