Welcome to the Official Blog Tour for Sarah Porter's Never-Contented Things! Today, on our tour stop, we have an exclusive excerpt AND a tour-wide giveaway to share! Check it out and grab your copy today! Follow the tour, HERE! 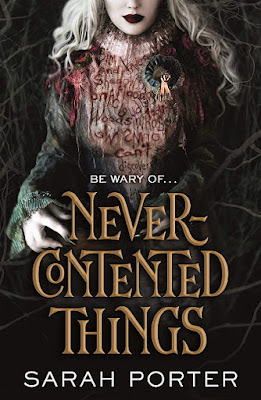 Prince and his fairy courtiers are staggeringly beautiful, unrelentingly cruel, and exhausted by the tedium of the centuries ― until they meet foster-siblings Josh and Ksenia. Drawn in by their vivid emotions, undying love for each other, and passion for life, Prince will stop at nothing to possess them.

First seduced and then entrapped by the fairies, Josh and Ksenia learn that the fairies' otherworldly gifts come at a terrible price ― and they must risk everything in order to reclaim their freedom.

*Excerpt*
we’d never seen them before
It was blue, the night, though dusk should have been over and done with, and we were already at least half-drunk. I should have pried the flask away from Josh half an hour before. He was barely sixteen and not much for pacing himself, at anything. But we’d been talking—about the future, which usually seemed too sickening to contemplate, since I was eight days from the age where foster care implodes with a pop—and though Mitch and Emma were actually kinder than otherwise, and wouldn’t want to spew me out on the street, they were reminding me on a frequent basis that I should explore my options, make arrangements, think about my next steps. The whole thought of where and what next felt like a giant blowing-apart, unthinkably steep and wide and high all at the same time. I was suffering from a kind of omnidirectional vertigo that must be what the helium feels inside a balloon as somebody leans in with a lit cigarette.
So we kept wandering, and the night colored blue all over us like it wanted to steal our shapes and paint us into being part of it forever. It was almost comforting, and better than being at home, where no one was waiting for us. Mitch and Emma were on vacation and they’d told me to take good care of my foster brother—which I thought I was, in my way—and to not trash the house, which they said half-kidding, almost trusting me. And even almost-trust shows how lucky we were to have them, and for six unbroken years at that, after the various dicey pseudo-homes Josh and I’d both cycled through before we found each other. I’d make sure that Mitch and Emma found their house pristine, cleaner than they’d ever seen it before. If we drank or smoked, we’d keep it outside in the dark, and there would be no spilled scotch on the sofa or burns scored into the carpet.
I couldn’t imagine what next, though I knew what Mitch and Emma had in mind: a group home for ex–foster kids, clear across the state. A lousy job and community college classes at night. They wanted me to have a decent life, as long as it was far away from Josh. There were programs for kids like me; the state would help with my tuition.
And I said yes, yes, but privately I kept hoping I could come up with something else. A different what-next, one good enough that I could bring Josh with me without destroying him. That was the goal: to hold on to my unexpected brother, the one who’d lurched into my heart out of nowhere when I was already twelve, without that being a cruel and stupid and careless thing to do.
But I couldn’t see how to pull that off on minimum wage, and I didn’t have a realistic prospect of earning more than that. Should I run off to the city and try desperately to make it as something-or-other? I wasn’t deluded enough to think that would work. So Josh and I didn’t like to say it, not directly, but we both knew we’d have to separate.

“Sarah Porter is a genius. Her language is lush and dangerous, and her books burn with the beautiful, ferocious intensity of a bonfire in the darkest night. Read Never-Contented Things with the lights on. Then read it again.” ― Brittany Cavallaro, New York Times bestselling author of A Study in Charlotte

“Sarah Porter’s Never-Contented Things creates a creepy new world like none I’ve seen before. Eerie, edgy, and filled with mystery, Porter takes us to the depths of the magical and psychological.” ― Danielle Paige, New York Times bestselling author of Dorothy Must Die

Praise for WHEN I CAST YOUR SHADOW

“Sarah Porter’s darkly imaginative When I Cast Your Shadow intrigues from the start. Tragic and engrossing, filled with nightmarish dreamscapes and menacing villains, it also treads the tender terrain of family, and the strange and sometimes dysfunctional ties between siblings. Highly recommended!”  —Kendare Blake, New York Times bestselling author of THREE DARK CROWNS

**About the Author**
Sarah Porter is the author of the Lost Voices Trilogy (Lost Voices, Waking Storms, The Twice Lost) in addition to Vassa in the Night — all for the teen audience. For over ten years she has taught creative writing workshops in New York City public schools to students in grades K-10. Porter also works as a VJ, both solo and with the art collective Fort/Da; she has played venues including Roseland, Galapagos, Tonic, Joe’s Pub, The Hammerstein Ballroom, The Nokia Theater, and the Burning Man festival. She lives in Brooklyn with her husband and two cats. 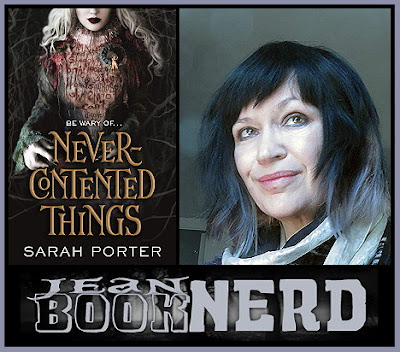