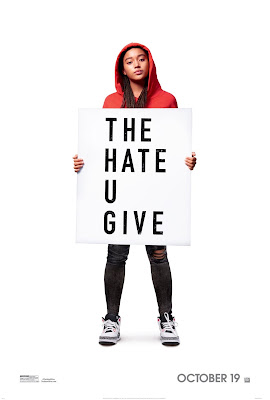 Based on the novel by:
Angie Thomas

Plot Summary:
Based on the best-selling novel, The Hate U Give tells the story of Starr Carter, who lives in two worlds: the poor, black neighborhood where she resides and the mostly white prep school she attends. This uneasy balance is shattered when she witnesses the fatal shooting of her childhood friend by a policeman. Facing pressures from all sides, Starr must find her voice and stand up for what’s right.
source

The Hate U Give is an emotional and brilliant film based upon a YA novel of the same name. It presents issues that are relevant to many who struggle in poorer neighborhoods or experience racism. A young black boy, Khalil Harris, is killed by a Caucasian police officer with the only other witness being Khalil’s childhood friend, Starr Carter played by Amandla Stenberg. The film, however, does not only focus on Khalil’s death, but on Starr. As the main character, Starr is an intelligent, loving, and courageous girl who balances two lives. She lives with her family in Garden Heights, a poorer but close-knit community, but she attends Williamson Prep School with predominantly, well-endowed Caucasian students. The balance she has keeps crumbles when she decides to find her voice and speak out for Khalil’s death. Her classmates begin to see the real Starr, not the quiet and complacent black girl that she appeared to be. Her family encourages her to be herself regardless of what anyone thinks. The message, “The Hate U Give Little Infants F’s Everybody,” is executed with amazing timing when Sekani, Starr’s little brother, steals his father’s gun from his belt and becomes a representation of the violence as a result of Khalil’s death. At first, Sekani seemed to be a passive observer but proves to be an important part of the film. The Hate U Give displays amazing cinematography and storytelling.

I enjoyed The Hate U Give not only for its YA novel origins but because the actors brought the story to life. Amandla Stenberg, Regina Hall, Russell Hornsby, Lamar Johnson, and TJ Wright made a beautiful unit while playing Starr’s family. Hall plays Lisa Carter, a nurse and encouraging mother who wants to help her children succeed in life. Hornsby plays Maverick 'Mav' Carter, Starr’s father is the protective and stringent paternal figure in the house. Johnson and Wright play Seven and Sekani, Starr’s caring brothers. Starr’s family is loving and protective of each other regardless of what the threat is. After Starr witnesses Khalil’s death, they try to support and comfort her with success. They seem to be a beacon of hope for a better future for Garden Heights.

The drama of the film builds up and encourages Starr to fight for her right to speak out and protest the Grand Jury’s verdict not to bring the officer to trial. Hailey played by Sabrina Carpenter, starts the film as Starr’s friend at Williamson. She represents ingrained racism and is Starr’s opposition to Starr’s Williamson persona. Aside from Starr’s supportive family, Hailey helps Starr see that she should not hide her origins and who she is to appease others. To do this, Hailey’s character is superficial, while she uses the hashtag BlackLivesMatter and Khalil’s death to skip classes, she solely sympathizes with the police officer. With Stenberg, Wright, Carpenter, and many other’s performances, The Hate U Give offers a deep message and an emotional story. As a YA novel-based film, it is inspirational for young adults who need help expressing their own beliefs.

Posted by Mariah Bonifacio at 5:50 PM