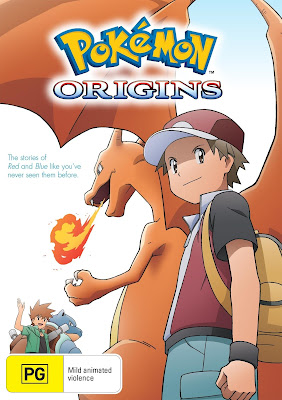 Plot Summary:
Pokémon are marvelous creatures that come in a variety of types and sizes, with abilities, powers, and personalities as diverse as they are numerous. Doctor Yukinari Ookido has dedicated his life to studying these fascinating beings, that can be caught, trained, traded, and battled against each other. There's only so much he can do from his lab though. With this in mind, Ookido entrusts two young boys with a Pokémon of their own and a computerized encyclopedia to catalog them. One of them, Green, is brash, passionate, slightly arrogant, and Doctor Ookido's own nephew. The other boy, Red, is equally passionate, and filled with a wide-eyed, mildly naive sense of wonder.

Pokémon: The Origin follows Red in his journey through the region of Kanto in his attempt to complete his "Pokédex" by capturing and cataloging all the Pokémon that exist. Along the way he'll discover there's more to himself and his goals than he originally thought. Red will have to put both himself and his Pokémon to the test in special Gyms whose leaders are steps along the way to the Pokémon League, in order to challenge the Elite Four and become a Pokémon League Champion.

Aside from his goals to become a Champion, Red has other problems brewing. There are others who capture and train Pokémon for more sinister reasons, with the infamous criminal organization Team Rocket being one of them. If Red can defeat them, fellow trainers, his rival Green, and wild Pokémon all through Kanto, he just may fulfill his own dream, and Doctor Ookido's as well.
source

With the development of the games and the to be announced release of Pokémon Sword and Shield I thought it would be appropriate to watch Pokémon: Origins. The four-episode short has been out for six years as it aired in 2013. It follows the original Pokémon trainer Red, his journey to become a Pokémon master, and complete his Kanto Pokédex. The four episodes were fast paced and skipped to important plot points in the original Red and Blue games. Such as Team Rockets takeover of the Pokémon Tower in Lavender Town and the Silph Co. in Saffron City, please note that these are the English names to the towns. What caught my attention aside from the story telling was the curious intro to each episode. Each episode started with a recap of events that happened off screen and away from the viewers gaze, most of Red’s gym battles. And then, the producers brought nostalgia to the long time Pokémon fans because the intros were like log ins from a players’ last save point on the Game Boy.

Unless you had prior knowledge of the original Pokémon games, the characters would seem a flat and lacked depth. Red started his journey as a naïve boy trying to catch ‘em all but after his first real battle with rival trainer Green, Red showed the viewer his compassionate and determined side. Green was an arrogant and highly gifted Pokémon trainer and wholly unlikable or unsympathetic character but not much else. We simply have a protagonist, their rival, and an antagonist with little background information to each. The transitions in character were swift and I, as a viewer, had little time to grow close to them.

Not only was trainer Red a more serious competitor, the battles were closer to the violence in the manga without being gruesome. The artwork was crisp, clear, and vibrant. I enjoyed watching Red develop and seeing the original games turn into an anime, even if it was rushed. In the end, I felt that Pokémon trainer Red and Pokémon: Origins were the series we needed for the Pocket Monster franchise.

Posted by Mariah Bonifacio at 8:25 AM