Welcome to the Official Blog Tour + Giveaway for Micah Dean Hicks' Break the Bodies, Haunt the Bones!!! Today, on our tour stop, we have an exclusive excerpt to share! So... Check it out and grab your copy now!!! Follow the tour, HERE!!! 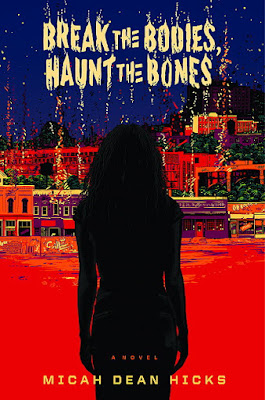 Synopsis:
Swine Hill was full of the dead. Their ghosts were thickest near the abandoned downtown, where so many of the town’s hopes had died generation by generation. They lingered in the places that mattered to them, and people avoided those streets, locked those doors, stopped going into those rooms . . . They could hurt you. Worse, they could change you.

Jane is haunted. Since she was a child, she has carried a ghost girl that feeds on the secrets and fears of everyone around her, whispering to Jane what they are thinking and feeling, even when she doesn’t want to know. Henry, Jane’s brother, is ridden by a genius ghost that forces him to build strange and dangerous machines. Their mother is possessed by a lonely spirit that burns anyone she touches. In Swine Hill, a place of defeat and depletion, there are more dead than living.

When new arrivals begin scoring precious jobs at the last factory in town, both the living and the dead are furious. This insult on the end of a long economic decline sparks a conflagration. Buffeted by rage on all sides, Jane must find a way to save her haunted family and escape the town before it kills them.

The Pig Boy Comes to School
He was about to text Trigger back, say thanks and tell him that it would be okay, even though it would never be okay, when Trigger texted again.
You probably don’t want to hear this, but you’re lucky. I don’t think my ghost will ever leave. This is the best thing that could have happened to you.
He slammed the face of his phone against the steps. No, he wasn’t lucky. He was lost. Worse than losing a friend or relative, he had lost a piece of himself. He was less than he’d been before. Why couldn’t everyone understand that?
The bus pulled up and sighed to a stop. Henry climbed on, walking between seats ripped open and vomiting foam. Whorls of graffiti covered every surface, even the windows. Only a scattering of kids rode it, most of them young. There was no driver. The haunted old thing kept dragging itself along the same route it always had, propelled by spirits alone.
A few days ago, he might have wondered how a machine could draw power from the grief of the dead. His ghost might have taken control of him, and days or weeks later he would have woken up and beheld some ghostly engine that burned spirits like coal. Now he could only imagine such a thing. Henry went to the back without looking at anyone.
“Henry? Hey, it’s you. Come sit by me.” The pig boy from the plant lounged across a seat in the back. He had pierced the edges of his thin ears, and heavy rings weighed them down against his cheek. He wore a T-shirt two sizes too big, the logo of some band Henry had never heard of splashed across it. Dark eye shadow masked his eyes in wide bands.
Henry sat in the adjacent seat. “You shouldn’t be here, Dennis. People aren’t going to like it.”
“Dad said that you’d look out for me.”
Henry stared into the pig boy’s face and started running through the variables. Hundreds of students and faculty, almost none of them comfortable with pigs being in town. Quiet nooks, dark rooms, dead-ends, and narrow corridors in a place without enough adults to keep track of everyone. Angry kids who felt like the world was unfair and getting worse all the time, no outlet for their anger. People who saw any difference as a criticism or a threat. A pig boy, alone. Even with his ghost, this wasn’t solvable. Henry’s heart raced with all the terrible things that could happen.
“Go home, Dennis.”
“I’m good at making friends,” the pig boy said. “Just wait and see.”
Copyright © 2019 by Micah Dean Hicks

Praise for BREAK THE BODIES, HAUNT THE BONES

“A tour-de-force of the imagination. Hicks has created a world that is beautifully and brutally surreal and yet, at the same time, BREAK THE BODIES, HAUNT THE BONES stands as a hyper-realistic psychological portrait of the death of the American factory town. My own identity as an American was disturbed and changed by this novel; some dormant understanding was shaken awake. This is a stunning and profound debut.” ―Julianna Baggott, bestselling author of New York Times Notable Book Pure

“I can’t stop thinking about this book. It’s a haunting story that burrows under your skin like an insect laying eggs that hatch within you in the middle of the night. Hicks’ mesmerizing imagery kept me turning the pages and asking myself ‘How is this book happening? What sort of literary witchcraft am I witnessing?’” ―Maurice Broaddus, author of Buffalo Soldier and The Usual Suspects

“BREAK THE BODIES, HAUNT THE BONES is a breathless wonder of a debut novel… Hicks is a magician with words and has written a spellbinding, haunting and necessary book.” ―Anne Valente, author of Our Hearts Will Burn Us Down

“Hicks has crafted a haunting story with multi-generational appeal, where the very real horror of poverty meets supernatural horror, and social issues like xenophobia, racism and economic anxiety are addressed organically through allegory and gripping storytelling.” ―Chris L. Terry, author of Black Card and Zero Fade

**About the Author**
Micah Dean Hicks is the author of the novel Break the Bodies, Haunt the Bones. He is also the author of Electricity and Other Dreams, a collection of dark fairy tales and bizarre fables. His writing has appeared in The New York Times, The Kenyon Review, and elsewhere. Hicks grew up in rural southwest Arkansas and now lives in Orlando. He teaches creative writing at the University of Central Florida. 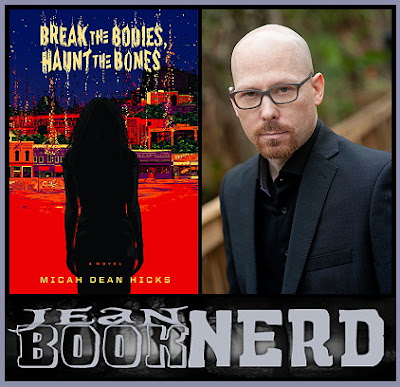