BLOG TOUR: A Soldier and A Liar by Caitlin Lochner

Welcome to the Official Blog Tour for Caitlin Lochner's A Soldier and A Liar! Today, on our tour stop, we have an exclusive excerpt AND tour-wide giveaway to share! Not only that, we celebrate this upcoming release with this tour!! That's right! A Soldier and A Liar releases tomorrow!!! So... Check it out and pre-order your copy now!  Don't forget to follow the tour, HERE! 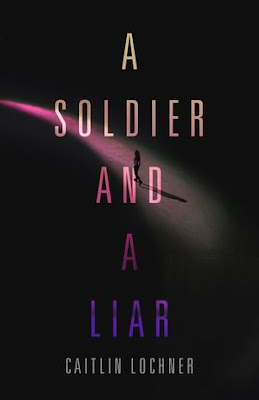 Synopsis:
In a world on the brink of war, four superpowered teens must learn to work together for peace in Caitlin Lochner’s action-packed debut novel, A Soldier and A Liar.

Lai Cathwell is good at keeping secrets. As a Nyte, a supernaturally gifted teenager who is feared and shunned by the ungifted, this skill is essential to survival. Orchestrating her own imprisonment to escape military duty has only honed her ability to deceive others. But when rebels start attacking the city, Lai is dragged back into the fight with a new team of Nytes.

Thrown together with Jay, a self-conscious perfectionist consumed by the desire to be accepted; Al, a short-tempered fighter lying for the sake of revenge; and Erik, an amnesiac hell-bent on finding his memories and his place in the world, Lai realizes she’s facing an entirely different kind of challenge–one that might just be impossible. But if this team can’t learn to work together, the entire sector will be plunged into war.


“Work together?” Johann asks. “I’ve never needed to work together with anyone in my life. I don’t need this team, and I don’t need you forcing me to try and accept it. I can take care of myself. The rest of you can figure out how to survive on your own.” And with that, the sergeant major stomps out of the room.

**About the Author**
(Um, so, wow bios are hard.) I studied creative writing at the University of South Florida and used my BA in words to become an English teaching assistant in Tokyo. I’m in love with storytelling of any kind, but especially in the form of books, manga, and video games. If you ever want to talk nerdy, I am VERY down.