Welcome to the Official Blog Tour + Giveaway for Kristen Simmons' The Deceivers, the first title in the Valhalla Academy series!!! Today, on our tour stop, we have an exclusive excerpt to share! So... Check it out and grab your copy now!!! Follow the tour, HERE!!! 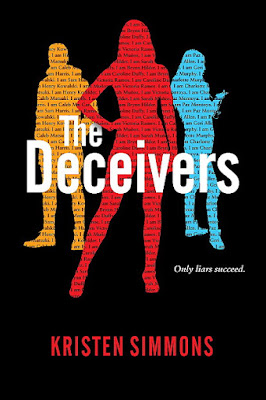 Welcome to Vale Hall, the school for aspiring con artists.

When Brynn Hilder is recruited to Vale, it seems like the elite academy is her chance to start over, away from her mom's loser boyfriend and her rundown neighborhood. But she soon learns that Vale chooses students not so much for their scholastic talent as for their extracurricular activities, such as her time spent conning rich North Shore kids out of their extravagant allowances.

At first, Brynn jumps at the chance to help the school in its mission to rid the city of corrupt officials--because what could be better than giving entitled jerks what they deserve? But that's before she meets her mark--a senator's son--and before she discovers the school's headmaster has secrets he'll stop at nothing to protect. As the lines between right and wrong blur, Brynn begins to realize she's in way over head.

*Excerpt*
In this scene, Brynn has just heard about Vale Hall, and how exactly one gets in… Enjoy! -Kristen

I blink, screwing a thumb into my temple. Ten minutes ago, I didn’t even know this school existed, now I’m picturing myself on some fancy estate, applying for internships in different countries. I need to come back down to earth before reality pops my balloon, and I crash.
But I don’t walk away.
Because if this school really exists, and if, by some mistake, I randomly get in, I could live there. I could get out of Devon Park, away from Pete, and work my way into the kind of college I thought wasn’t possible—the kind that means never looking back.
On the edge of the train car, Charlotte’s red lips have curled into a smile.
“There’s a reason we’re meeting here tonight—why someone didn’t bring you to the estate or call you on the phone. At Vale Hall we have a little initiation test. Just to see how much you really want this.”
The reason for the invite is becoming clearer. The students weed out the kids they don’t want, then must make some kind of recommendation to the admissions department. I’ve seen hazing in movies. They’re probably going to make us streak down Sycamore Avenue or sing the National Anthem in the mall.
Call me desperate, but I might just do it.
“We’re a family, and we don’t let just anyone into our house. Consider it us looking out for each other.”
Charlotte looks at Sam as she says this, and there’s something intensely private that passes between them. A shared thought, that leads to him pressing his fingertips to his lips and blowing her a kiss.
I don’t know why, but it reminds me of Devon Park—how the people stand up for their own, even while they knock each other down. The familiarity makes a small muscle in my jaw unclench.
“So here’s the deal,” says Charlotte. “We’re going to play a little game, and the winner gets an interview with our director. No waiting lists. No letters of recommendation. You do this one teensy tiny thing, we’ll bump you to the front of the line.”
The doubt inside me spreads—there’s no way the students have this much sway. Still, I wait, eager and ready.
“Who in the class can tell me who Matthew Sterling is? Anyone?” She looks around the group. “Yes, in the front row.”
“He’s an actor?” tries a guy in a tight T-shirt with arms made for Muscle Magazine. He glances back at Damien as he says this, but Damien only hangs his head and laughs.
“You’re cute,” Charlotte says, “but not very smart. Next.”
I bite my lip. The name’s familiar, but I can’t pinpoint exactly who he is.
“He’s a senator,” calls Henry. “He’s probably going to be the next vice president. He’s forty-eight years old and has steel-blue eyes. What?” He looks at Sam. “Anyone who’s ever seen Pop Store knows that. They’re always talking about how his navy suits bring out his eyes.”
A few chuckles break the strained quiet.
Henry’s right. I have seen Matthew Sterling, and he does have blue-gray eyes. He’s been on that crappy local celebrity gossip show Mom’s always watching after her soaps—Pop Store. There was something on about him the other day. His Sterling Foundation—the one responsible for fixing up a bunch of historic buildings in Uptown—was opening a new restaurant.
My stomach sinks. Matthew Sterling is a big deal. Wherever Charlotte’s going with this, it can’t be good.
“Ten points to Henry.” When he cheers, Charlotte adds, “Don’t get too excited, you’re already in.”
He cheers again.
“Today Senator Sterling and his lovely wife left for a benefit in Washington, DC, and while the cat’s away, the mice will play. Their two kids, Grayson and Gabrielle, are throwing a little party at their house in Heatherwood tonight. Just a little get together of a hundred or so of their closest friends.”
I bounce on my heels, trying to picture where Heatherwood is on the SCTA train map. It’s north of Uptown somewhere. The way the map’s laid out, it might as well be a place in the sky.
“Your mission, should you choose to accept it, is to get a date with Grayson Sterling.”
There’s a beat of silence, then a girl with a face like a porcelain doll says, “Tonight?”
“Tonight,” says Charlotte.

Praise for THE DECEIVERS

"Brilliantly plotted, tightly paced, and intensely smart. The Deceivers is the perfect con, full of clever characters, untrustworthy romance, and lie after lie after lie, with just enough truth tossed in to make you question everything. Kristen Simmons is a deceptive genius. I could not devour this book fast enough." —Stephanie Garber, #1 New York Times bestselling author of Caraval

“Beneath its quick and clever dialogue, The Deceivers examines the moral grey area between good and evil. Lying has never seemed so much fun." —Katharine McGee, New York Times bestselling author of the Thousandth Floor Trilogy

"Masterful, suspenseful, and brilliantly executed, The Deceivers is the perfect con. Kristen Simmons is an outstanding storyteller, and this is her best yet." —Amie Kaufman, New York Times bestselling author of Illuminae and These Broken Stars

"Addictive and delicious, The Deceivers will keep you turning the pages well into the night!" —Katie McGarry, critically acclaimed author of Pushing the Limits

"Brynn is a sharp, analytical thinker with a soft heart - the exact kind of protagonist I love rooting for, especially as villains and heroes creep out from places I don't expect...Even the prerequisite romance was a pleasant surprise as Brynn and her love interest show complete respect for one another, giving enthusiastic consent the front seat it absolutely deserves and yet feels underrepresented in young adult literature. I devoured this book in one big gulp because I couldn't wait to see what twists and turns were ahead." —Kelly Morton, Joseph-Beth Booksellers

“The Deceivers is a perfectly paced, high stakes read that is honestly super fun for the reader. Don't plan on putting it down in the middle to do other things, you'll want to keep reading. Simmons has outdone herself with this incredible new story about con artists and a girl trying to find her own path.” —Rachel Strolle, Teen Librarian, Glenside Public Library District

**About the Author**
Kristen Simmons is the author of the ARTICLE 5 series, THE GLASS ARROW, and METALTOWN. She has worked with survivors of abuse and trauma as a mental health therapist, taught Jazzercise in five states, and is forever in search of the next best cupcake. Currently she lives in Cincinnati, Ohio with her husband, where she spends her days supporting the caffeine industry and chasing her delightfully rambunctious son. 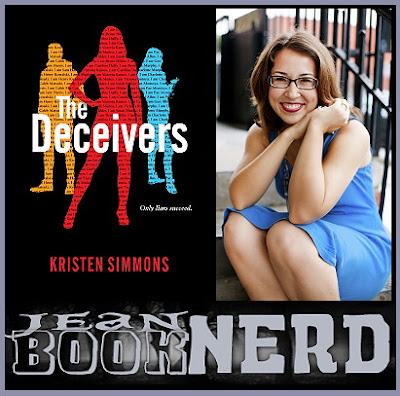