Welcome to the Official Blog Tour for Geoffrey Girard's Mary Rose! Today, we are thrilled to kick it off with an exciting excerpt! Now, what is a blog tour without a giveaway! Yup! Just keep scrolling for the tour-wide giveaway! So... Check it out and pre-order your copy today! Don't forget to follow the tour, HERE! 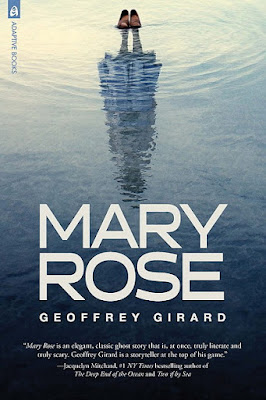 Synopsis:
Mary Rose Moreland and Simon Blake are the perfect couple: successful young professionals in Philadelphia, attractive, madly in love, and ready to start a life together. When they travel to England for Simon to ask her parents’ permission to marry Mary Rose, he learns an unsettling secret: Mary Rose disappeared when she was a little girl while the family was vacationing on a remote Scottish island. She reappeared mysteriously thirty-three days later in the exact same spot without a scratch on her and no memory of what had happened.

After Simon hears about this disturbing episode in Mary Rose’s childhood, he becomes obsessed with finding out what happened. He proceeds to launch his own investigation and arranges during their honeymoon for them to visit the island where she disappeared. But as Mary Rose’s behavior gets stranger after their engagement, the need for Simon to unlock the truth about her past grows even more urgent. What he uncovers is beyond his most terrifying fears.

Mary Rose is author Geoffrey Girard’s chilling and modern take on a classic ghost story originally written by J. M. Barrie. And for years, master of suspense Alfred Hitchcock attempted to adapt Mary Rose into a film but was never successful. With this novel, Girard taps into the nightmarish fears that inspired both Barrie and Hitchcock, while also bringing the story to the present day with his own unique voice.

*Excerpt*
Downstairs, however, was dark and empty.
She saw only the black edges of various-sized frames, the paintings and photos within lost to night, her ancestors going back five generations. Well into high school, she’d too often imagined them reaching out of the frames for her. Their lifeless dirt-clogged claws gripping her shoulders, wrenching her away. Tonight, their faces, and hands, were hidden, and even the bordering that held them had grown darker.
Mary Rose stood perfectly still, holding her breath, eyes drifting closed to help her focus, hoping to hear the sound again. Ten seconds, thirty. Silence. The whole house, too, seemed to be holding its breath. But there was nothing there.
She opened her eyes again, ran her fingers along the railing, watching them trace the snaking lines of polished wood. Here was something real, something corporeal. Her fingers, the banister. Her soft, pale gown and bare cold feet. All objective, all right and true. Everything else was . . .
Nothing at all. Nothing but fantasy. Silly, silly Mary Rose.
She turned back toward her room. And froze.
At the end of the hall was something large.
Someone. A person. Standing there quietly in the dark.
No, not standing. Swaying almost, as if caught in faint wind.
And it was enormous. Too enormous. Its head almost reached the ceiling. So, not a person—that was impossible—but formed almost like one, shoulders bowed out, arms dangling to its sides, and the smaller ovoid where a head should be. A misshapen head, yet somehow familiar . . .
“Simon?” she called out, but wasn’t sure the word had even passed her lips. Had she called for him to come out of his room, or because it was him standing at the end of the hall? Who else could it be? It was no one. It couldn’t be . . .
“Who is that?” she asked, more loudly. “What do you want?”
Each word issued forth with more power but also more fear.
Her mind fighting to rationalize the shape of what she was seeing. Maybe it was some dresser she hadn’t noticed before, a grandfather clock. Yes, the shape of a grandfather clock was exactly what she was seeing . . .
A grandfather clock that had just stepped closer.
The sound of her breathing, rapid and uneven, filled her ears with its strange and terrible panic. Her own shadow cast terrifying images along the wall beside her, though the light hadn’t changed. She thought again of screaming, waking the whole house. Simon would come and help her. Her parents would come and . . .
She didn’t scream, though. She didn’t. She wouldn’t.
Instead she paced forward, accepting whatever fate awaited down the hall. Each step was quicker, heavier. Mary Rose’s teeth gritted, hands clenched into balls, and her panic fell away, morphing into a surge of desperate, eager certainty. She would fight, yes!

What others are saying about Mary Rose

"An exceptional gothic thriller. Girard's literary roots shine through, and the dread rises with every turn of the page. Mary Rose will send a true chill down your spine. A haunting, scary, and beautifully written novel." ―J.T. Ellison, NYT bestselling author of LIE TO ME

"Girard's eerie descriptions exploit the fear of the unknown and the unnatural; and secretive characters, including the enigmatic island, hide their intentions. This is a nightmarish tale of repressed memories and misdirection." ―Publishers Weekly

"The supernatural terror in MARY ROSE is masterfully invoked via a setting that quietly feeds on the past. Yet the novel's most chilling element is its aching and desperate love story. The titular character is as multifaceted as a dark gem, and Geoffrey Girard's genius is in his ability to cause fear of, and for, Mary Rose at the same time. MARY ROSEhas the effect of burrowing under your skin, lodging next to your throat - and then your heart." ―Vicki Pettersson, NY Times and USA Today Bestselling author of SWERVE and SIGNS OF THE ZODIAC series

"Mary Rose is an elegant, classic ghost story that is, at once, truly literate and truly scary. Geoffrey Girard is a storyteller at the top of his game." ―Jacquelyn Mitchard, #1 NY Times bestselling author of The Deep End of the Ocean and Two if by Sea 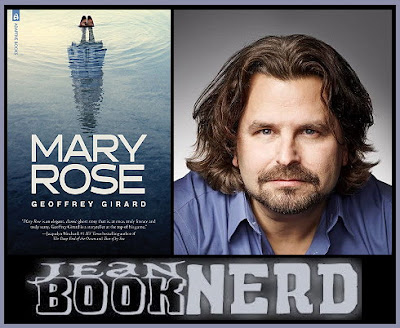