We are celebrating the book birthday of Refused To Reign by Constance Phillips with this Release Day Launch! This is the first book in the Paranormal Hotel series, a new paranormal romance series by the author! To celebrate its release, we will be sharing with you an exciting excerpt! Plus, there's a cool giveaway to add to the celebrating...just keep scrolling down the post! 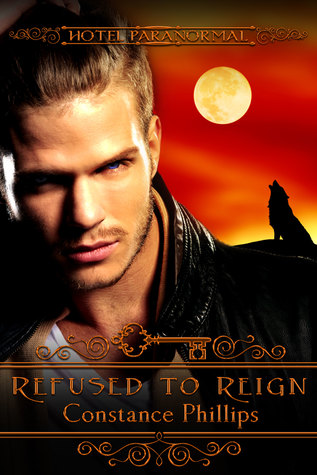 Synopsis:
After his father's death, Reider relinquinshed reign of the wolf pack to his brother Geoff, leaving everything—including Sable—behind, but refused to let go of the one thing his father evver gave hi: the amulet that symbolized leadership. Six months later, Geoff is missing and the Coclave has called him to the Hotel Paranormal. They want him to take control of the Great Basin pack or hand over the amulet reserved for the alpha of the Great Basin Pack. Reider quickly learns the amulet is coveted by many.

Can Reider unravel the mystery and find his brother or will he submit to Sable and the Conclave and reclaim his reign.

*Excerpt*
Reider’s eyes adjusted to the low light in the corner of the Vegas resort’s bar easier than most. Truth was, he preferred the dark to the mid-day sun beating down on the Vegas strip.
As a lone wolf, he preferred a dark, cool den to the blazing heat of the desert sun. For him, everything seemed clearer and it was easier to tell who the enemy was.
He wrote off the twisting knot in his gut to the fact he was in Mojave territory. Borders never bothered his brother much, though. Everything about the desert gave Reider the urge to run, as fast as two—or four—legs would carry him.
Like he had six months ago.
For twenty-three years before that, he was the bastard son of Preston Lowell, alpha and leader of the Great Basin Pack. Rightful heir to the throne, and the product of a single night’s tryst during a blood moon festival, he spent a majority of his life forgotten and ignored by everyone except his grandmother, mother, and the woman’s two daughters by another wolf.
About a week ago, he’d begun receiving concerned texts from some of the wolves back in Carson City telling him his younger brother—now reigning leader—had disappeared. With each passing day, more inquiries came. Some begged he return to lead the pack.
Something he would never do.
So, here he sat in the small bar off the Bellagio’s lobby.
Six months ago, while convincing Reider he wasn’t fit to lead, Geoff swore off all his vices. Promised he was done with casinos.
Done with gambling.
Done with tequila.
Reider never believed Geoff’s sincerity and it didn’t surprise him the man had appeared to back slide only six months later.
A waiter appeared with an ice-cold beer. Setting the mug on a cardboard coaster, he then handed him a small beige envelope.
Reider rubbed the back of his neck, hoping the hairs that stood at attention would take a break and lie back down. Every one of his wolf senses had risen to high alert the moment he’d walked into the hotel.
As certain as he was Geoff would be here, he’d only picked up light traces of his scent in the lobby and near the elevators. Not in the corridors of the hotel near his favorite suite. He hadn’t been on the casino floor in the recent past either. No trace of him in the high rollers room.
And last—but not least—no trace of him here, in the Lilly Bar.
Confusing, but Reider had to believe it had been a long while since Geoff had been at the Bellagio, and hadn’t gambled when he was there.
He flipped the envelope over. It was sealed with green wax in the shape of a large claw.
Shit! The Conclave. 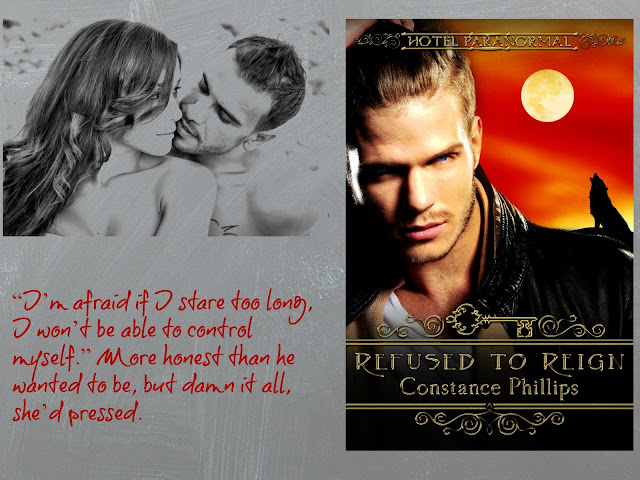 When not writing stories of finding and rediscovering love, Constance and her husband spend the hours planning a cross-country motorcycle trip for the not-so-distant future...if they can find a sidecar big enough for the pups.