We are thrilled to share with you this Excerpt Reveal for Amalie Howard & Angie Morgan's My Rogue, My Ruin, a sexy historical romance!

“Smart and fast-paced with plenty of steam! This writing duo is a powerhouse of talent!” – New York Times bestselling author Sophie Jordan 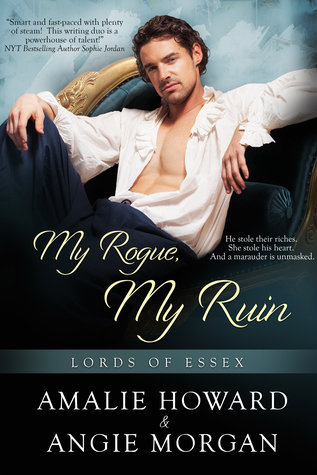 Synopsis:
He stole their riches, she stole his heart

The Marquess of Hawksfield’s lineage is impeccable and his title coveted, but Archer Croft is as far from his indulgent peers as he can get. His loathing for the beau monde has driven him to don a secret identity and risk everything in order to steal their riches and distribute them to the less fortunate.

Lady Briannon Findlay embraces her encounter with the Masked Marauder, a gentleman thief waylaying carriages from London to Essex. The marauder has stirred Brynn’s craving for adventure, and she discovers an attraction deeper than the charming thief’s mask.

Brynn is a revelation, matching Archer in intelligence, wit, and passion. Stubborn and sensuous in equal measure, she astonishes him at every turn, but when someone sinister impersonates Archer’s secret personality, and a murder is committed, Archer begins to think he doesn’t stand a fighting chance without her.

*Excerpt*
“Why are you out here at this ungodly hour?” he asked.
“I could ask you the same thing,” she replied. “As well as why you are trespassing on private property.”
Archer smiled at her tone and leaned against a nearby tree, easing the weight of his injured ankle for the moment. There it was—the brief glimpse of the woman he’d met in Dinsmore’s carriage, not the quiet mouse he’d waltzed with. “Ah, but I believe this tree, right here,”—he slapped the trunk with a rakish grin—“marks the dividing line between my estate and yours. So technically, I’m on my property and you are on yours.”
Her eyes narrowed at his teasing before plucking up the tweed cap from where it lay on the ground and tugging it back into place upon her head. She then picked up the spent pistol and tucked it into the narrow, single holster gun belt looped around her waist. “No matter. It’s hardly any of your concern why I am out on my own land. Go on your way, and I’ll be on mine.”
His jaw dropped as she wound her fist into the horse’s bridle, loosely slung around its neck, and pulled herself deftly up onto the horse’s back. She sat astride in a way that made his pulse shorten. “Where is your saddle?” he managed.
She eyed him imperiously. “I don’t like them, not that it’s any of your business.”
“It isn’t safe,” he ground out, surprised by his sudden irritation.
“I’ve been riding without a saddle since I was a child,” she shot back. “I’m safer without one than I am with one.”
“As you were before you got thrown into the river?” Archer couldn’t resist taunting.
Her jaw jutted forward, a mutinous look in her eyes. She pressed her lips together, likely to stop herself from uttering something completely inappropriate. Perhaps one of the colorful words she’d been using while attempting to climb out of the gulch.
“And what if you were attacked by the masked bandit—again?” he continued. “Or haven’t you had enough danger for the time being?”
“I can protect myself,” she said.
“What with?” he asked before he thought of the clean hole in the boar’s forehead.
Briannon sighed dramatically. “Why, with my knitting needles, of course.”
Struck again by her lightning-quick wit, the short bark of laughter left his lips before he could contain it. “Pray, where was your pistol the other night when you were robbed?”
“In my knitting reticule, of course, where all ladies’ pistols are kept,” came her tart response. “I assure you, if I had my pistol, the outcome of that robbery would have been quite different.”

Amalie Howard grew up on a small Caribbean island where she spent most of her childhood with her nose buried in a book or running around barefoot, shimmying up mango trees, and dreaming of adventure. 25 countries, surfing with sharks and several tattoos later, she has traded in bungee jumping in China for writing the adventures she imagines instead. She isn’t entirely convinced which takes more guts. She is the author of several young adult novels critically acclaimed by Kirkus, Publishers Weekly, VOYA, and Booklist, including Waterfell, The Almost Girl, and Alpha Goddess, a Spring 2014 Kid’s INDIE NEXT title. Her debut novel, Bloodspell, was a #1 Amazon bestseller and a Seventeen Magazine Summer Read. She is also the co-author of the adult historical romance series, The Lords of Essex. As an author of color and a proud supporter of diversity in fiction, her articles on multicultural fiction have appeared in The Portland Book Review and on the popular Diversity in YA blog. She currently resides in Colorado with her husband and three children.

Angie Morgan is the author of several young adult and middle grade books, including The Beautiful and the Cursed, The Lovely and the Lost, and The Wondrous and the Wicked (written under the name Page Morgan) and Everlasting and The Eternal Sea, and two Suzanna Snow Mystery novels (written under her real name, Angie Frazier).A lover of history and romance, and with a number of bookshelves stuffed with paperback romance novels by her favorite historical romance authors — Sarah MacLean, Julia Quinn, Elizabeth Hoyt, Eloisa James, Tessa Dare, Lisa Kleypas, Sabrina Jeffries, and so many more — Angie has taken the leap into adult romance.
My Rogue, My Ruin is the first book in her new Lords of Essex series, co-written with her good friend and fellow author, Amalie Howard.Angie lives in New Hampshire with her husband, their three daughters, and a menagerie of pets. When she isn’t writing, she’s either reading, training for a half marathon, cooking, shuttling her children to school, dance, and gymnastics, or — if she’s lucky — sleeping.