MARIAH's THOUGHTS on The Secret Life of Pets (2016) 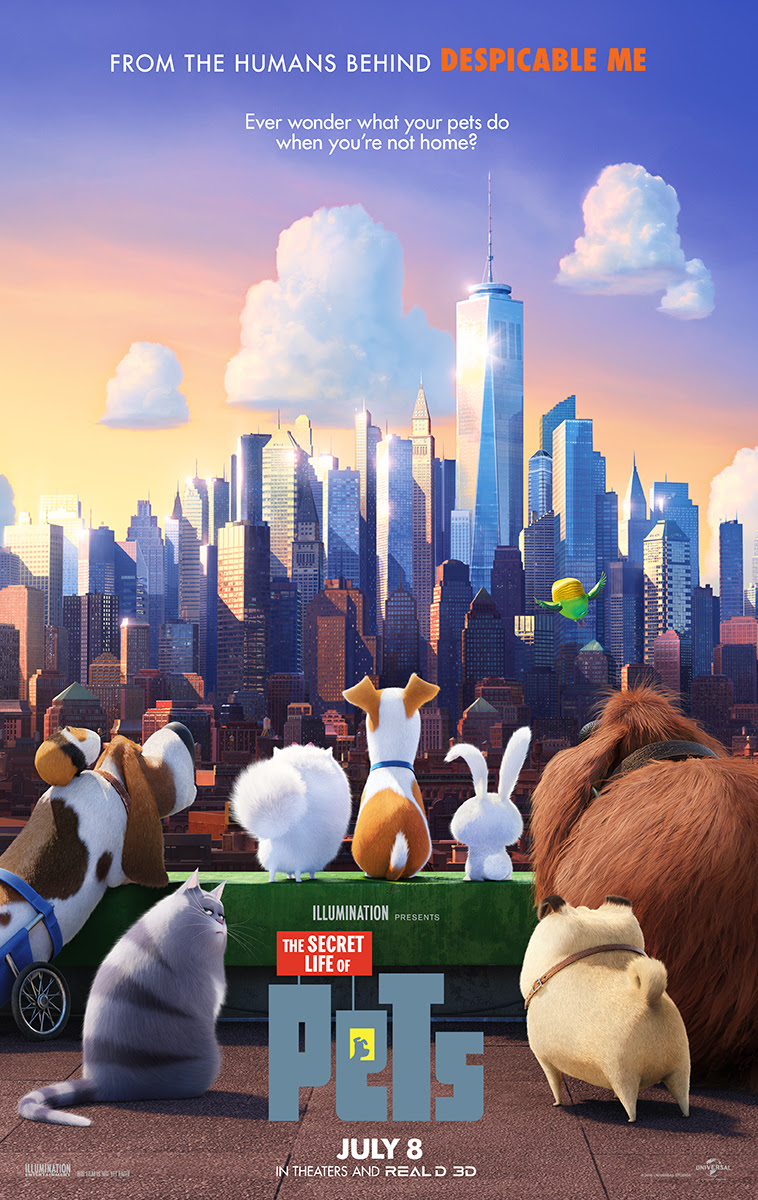 Plot Summary:
For their fifth fully-animated feature-film collaboration, Illumination Entertainment and Universal Pictures present The Secret Life of Pets, a comedy about the lives our pets lead after we leave for work or school each day.

A popular family animation that racked up about $104 million dollars its opening weekend, The Secret Life of Pets is sweet, funny, and touching. It was endearing for the family and must see for pet owners. But the story was cliché, if not wholly predictable, as the two main protagonists struggle to find a place to call home. The films supporting cast pushes the main conflict along with side stories, searching for Max and Duke, as their little adventure proceeds.

The 3D computer-animated comedy opens with a cheerful shot at Central Park, denoting Max’s (voiced by Louis C.K.) easy going and carefree life style. But what’s a story without a conflict, as Katie (voiced by Ellie Kemper) brings home a large, sloppy dog from the kennel. Duke’s appearance and attitude completely conflict with Max’s. Max is a small, white and brown terrier with a content attitude, while Duke is rough and excitable, easily knocking over papers and moving furniture. This makes them perfect adversaries, as Max tries to get rid of Duke.

The supporting cast and Max’s friends, although with their short attention spans, are friendly, naïve, and adventurous as they make their way through the city. Gidget (voiced by Jenny Slate) is a romantic, Mel and Buddy (voiced by Bobby Moynihan and Hannibal Buress) are humorous and a bit dim witted, and Chloe acts lightly as a voice of reason if not a motivated cat in comparison with majority of the crew. They are a barely functioning group if it wasn’t for Gidget’s wild determination to “save” Max.

The real conflict of the story doesn’t happen until after the above mentioned exposition, where the infamous white rabbit, Snowball (voiced by Kevin Hart), makes his appearance. As a famous comedian he is majority of the comedy in The Secret Life of Pets. Snowball is energetic, cute, and psychotic to an extent. He provided much of the comedic effect with his gang, exaggerated antics, and dramatic voice.

The Secret Life of Pets, in a nutshell, leaves much to be desired as a comedy and had a weak or predictable story. The comedy was minimal and I think there was an allusion to drinking that was supposed to be funny. It would be for a kid but it was just too juvenile to enjoy. It was a nice film for the moment and didn’t leave a lasting impression.