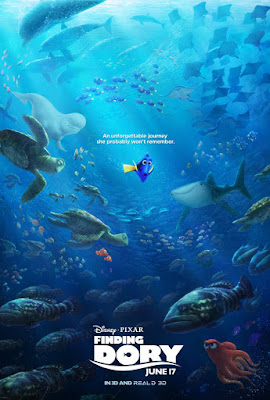 Plot Summary:
“Finding Dory” reunites the friendly-but-forgetful blue tang fish with her loved ones, and everyone learns a few things about the true meaning of family along the way. The all-new big-screen adventure dives into theaters in 2016, taking moviegoers back to the extraordinary underwater world from the original film.
source

Dory alone is an interesting character. Adorable but not worth a family trip to the theaters. Clearly, since I can barely remember it while writing this review. The audience gets to see Dory as a tiny kid and her travel outward into the ocean, despite her parent’s desperate attempts to keep her safe. This builds a parallel to reality and for those who have loved ones with short term memory loss. Dory’s flashbacks maintain a hopeful mood to the movie. Finding Dory is slightly tragic but sweet to it’s very core.

The audience still maintains some of the original characters from its predecessor, such as Nemo, Marlin, Dory, and for a short time Squirt and Crush, but a plethora of new characters appear as Dory tries to find her parents. Some of them may take away the spot light, like Hank or Destiny the whale shark. Hank is cranky and curt, a contrast to Dory while Marlin and Nemo are not on screen. Despite trying to act as Dory’s sidekick, he has on occasion guided bits of the movie. The character’s personalities vary greatly, making a fun cast that the family will love.

This movie creates a heartfelt message for those that feel self-conscientious about certain qualities. To try and remove Dory’s short term memory loss as an annoying trait, she is kind, friendly, and perseveres throughout. By being herself, she made friends and reunited with some old ones in her journey to find her parents. Instead of scorning herself or others doing it for her, Dory is adorable and adventurous by always adapting and living in the moment. (Not like she has a choice, but it’s not like Dory’s just going to stand by all the time and wait for others.) Despite her short term memory loss, she is lovable and sweet with a complementary cast that helped push the plot forward.

Posted by Mariah Bonifacio at 10:29 PM