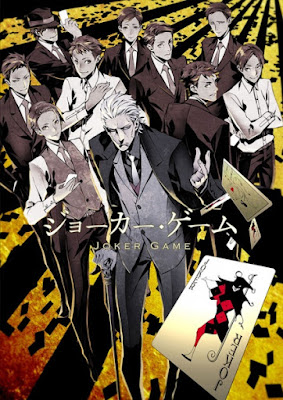 Based on the novel series by:
Koji Yanagi

Plot Summary:
With World War ll right around the corner, intelligence on other countries' social and economic situation has become a valuable asset. As a result, Japan, has established a new spy organization known as the "D Agency" to obtain this weapon.

Under the command of Lieutenant Colonel Yuuki, eight agents have been assigned to infiltrate and observe some of the most powerful countries, reporting on any developments associated with the war. In order to carry out these dangerous tasks, these men have trained their bodies to survive in extreme conditions and studied numerous fields such as communications and languages. However, their greatest strength lies in their ability to manipulate people in order to obtain the information necessary to give their nation the upper hand.

*My Thoughts*
A quick pick-me-up to end spring and kick start summer, Joker Game is satisfying to watch as we see the D Agency in action. The introduction sequence gives the audience to World War II they need and breaks into, much like the name of the series suggests, a poker game among the members of D Agency. This metaphor for information gathering as a dangerous game was clever but not well hidden considering the name of the anime, novel, and inclusion in the first episode. The introduction is racy and fast, only allowing viewers to obtain glimpses of the main cast with a few action shots. As the it comes to a close, the audience is left with wonder for the upcoming episode as the members of D Agency stand together ready for business.

Much like the spies in this anime, this series leave you wondering “What the hell happened.” The storyline of Joker Game seems to be an idealized version of what life as a spy would be. The audience is taken through the 12-episode anime character by character but does not seem to have an overarching story to tell other than: the spies are gathering information for Japan. (Much like the trailers, I couldn’t find one that didn’t give away a certain episode.) The series goes from one character’s mission to another with no ulterior motives. But I have to hand it to the director and author of the series, that I became enamored by the characters and wondered what made them who they are until they became a part of D Agency. Of course, it was also because they were handsome young men.

Without memorizing voices or distinct physical characteristics, many of the characters seemed to blur together. This wasn’t necessarily a bad thing because they had to blend into the country they were sent to. But what happens when World War II is over? Do we get to see anything more to the members of D Agency? Probably not since the job of a spy would be to remain anonymous. Joker Game the series, it’s characters, and storyline are a bit of a superficial mystery. (“Superficial mystery,” that sounded ironic.) Overall, Joker Game, although thrilling and intellectually interactive (depending on whose comments you’ve been reading), it didn’t leave a lasting impression on me.

Posted by Mariah Bonifacio at 10:05 PM