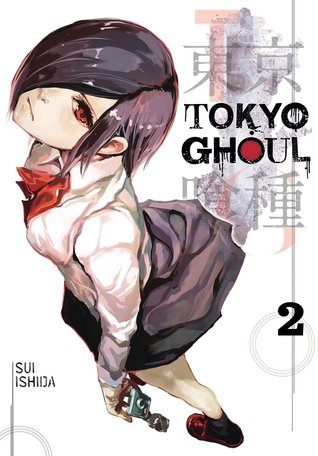 Synopsis:
Ghouls live among us, the same as normal people in every way--except their craving for human flesh. Ken Kaneki is an ordinary college student until a violent encounter turns him into the first half-human half-Ghoul hybrid. Trapped between two worlds, he must survive Ghoul turf wars, learn more about Ghoul society and master his new powers.

Unable to discard his humanity but equally unable to suppress his Ghoul hunger, Ken finds salvation in the kindness of friendly Ghouls who teach him how to pass as human and eat flesh humanely. But recent upheavals in Ghoul society attract the police like wolves to prey, and they don't discriminate between conscientious and monstrous Ghouls.

I'm not going to lie; the main reason I like buying certain manga volumes is because they contain my favorite characters or scenes. And besides, if you want that series to keep coming, you should support that manga through buying the manga; volume 2 includes Uta and Yomo. Basically, the reader learns a bit more about how ghouls live and Tokyo Ghoul makes the reader question what it means to be human. Between ghoul families and ghoul investigators (who are the police of Tokyo Ghoul), your morality of justice should be thrown out, objective accounts of survival must remain, and yet all sympathy should be taken into account. A little tidbit I didn't add in the previous review is that there are funny omakes or shorts in the back of each volume that reveal a more light-hearted side to characters. Sui Ishida's  Tokyo Ghoul puts major importance on knowledge, "What you don't know, will hurt you," added secret messages about characters through tarot cards and small details that are often overlooked but it's a signature marker for Sui Ishida that makes this interesting. So far, Tokyo Ghoul has become one of my favorite anime/manga in a while.

Posted by Mariah Bonifacio at 12:39 PM