MARIAH'S THOUGHTS on The Sherlock Holmes Handbook by Ransom Riggs 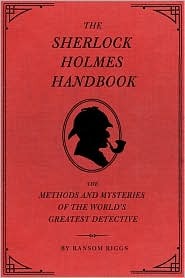 Synopsis:
"My name is Sherlock Holmes. It is my business to know what other people don't know."

This reader’s companion to the casework of Sherlock Holmes explores the methodology of the world’s most famous consulting detective. From analyzing fingerprints and decoding ciphers to creating disguises and faking one’s own death, readers will learn how Holmes solved his most celebrated cases—plus an arsenal of modern techniques available to today’s armchair sleuths. Along the way, readers will discover a host of trivia about the master detective and his universe: Why did Holmes never marry? How was the real Scotland Yard organized? Was cocaine really legal back then? And why were the British so terrified of Australia? Full of fascinating how-to skills and evocative illustrations, The Sherlock Holmes Handbook will appeal to Baker Street Irregulars of all ages.

I grew up in Florida, went to Kenyon College in Ohio, then film school at USC in Los Angeles, where I still live. I write books and screenplays, blog daily for mentalfloss.com, and make short films.

Miss Peregrine's Home for Peculiar Children is my first novel. I'm really excited about it - it was challenging and rewarding and I hope people like it. If you read that and like the found photographs in it, you might be interested in a book comprised entirely of found photographs that I have released in January 2012 from HarperCollins. It's called Talking Pictures. You can find sneak peeks by doing a search for "mental floss talking pictures" (I included a number of images in blogs there) and I made a kinda-sorta book trailer for it, which is on my YouTube page.

Note: The review contains NO spoilers

It’s probably really late to be reading this book now but I didn’t know it existed until 2014. At first glance, The Sherlock Holmes Handbook is a quaint little hardcover that you can fit in your pocket and after reading through it, held exactly what I was looking for and more in a “How to: Sherlock Holmes” book. The handbook is for all readers: young, old, veteran fans, and new; it’s very informative without being tedious but this would only apply to those who have A) even a little interest in Sherlock Holmes, B) want to sharpen their own deductive skills, and/or C) only know that Sherlock Holmes is a detective and nothing more. Unfortunately, if you’re a long time Holmes fan, this book probably won’t hold anything new for you. The reader learns much about Holmes as a person, a detective, an anti-socialite, meaningful background about him, and his interests. Personally, I enjoyed it very much and although Sherlock Holmes was a detective only in fiction written by Conan Doyle, I find there are plenty of practical uses for the topics discussed in The Sherlock Holmes Handbook. There can be a lot of messages taken from this little handbook but the number one message for me was “Pay much attention to detail” and with that you may hardly ever be deceived again. Also included were fun little cracks carefully kneaded into the text that seemed too casual, so much that it didn’t seem like there were jokes at all. I’m not sure if that was intentional but I thought it was nice or “cute” in my own word. From the fictional detective, Ransom Riggs gives you the simple but enjoyable Sherlock Holmes Handbook and with one last phrase from Holmes himself: “Exactly, my dear Watson.”

Posted by Mariah Bonifacio at 10:28 PM