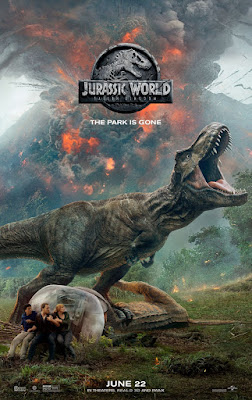 Based on Character Created by:
Michael Crichton

Plot Summary:
It’s been three years since theme park and luxury resort Jurassic World was destroyed by dinosaurs out of containment. Isla Nublar now sits abandoned by humans while the surviving dinosaurs fend for themselves in the jungles.

When the island’s dormant volcano begins roaring to life, Owen (Chris Pratt) and Claire (Bryce Dallas Howard) mount a campaign to rescue the remaining dinosaurs from this extinction-level event. Owen is driven to find Blue, his lead raptor who’s still missing in the wild, and Claire has grown a respect for these creatures she now makes her mission. Arriving on the unstable island as lava begins raining down, their expedition uncovers a conspiracy that could return our entire planet to a perilous order not seen since prehistoric times.

With all of the wonder, adventure and thrills synonymous with one of the most popular and successful series in cinema history, this all-new motion-picture event sees the return of favorite characters and dinosaurs—along with new breeds more awe-inspiring and terrifying than ever before. Welcome to Jurassic World: Fallen Kingdom.

Directed by J.A. Bayona (The Impossible), the epic action-adventure is written by Jurassic World’s director, Trevorrow, and its co-writer, Derek Connolly. Producers Frank Marshall and Pat Crowley once again partner with Spielberg and Trevorrow in leading the filmmakers for this stunning installment. Belén Atienza joins the team as a producer.
source

Jurassic World: Fallen Kingdom has a nice balance of humor, action, and sentiment. Characters Owen Grady and Franklin Webb add sarcastic humor and a nervous wreck to the movie but also in Fallen Kingdom the audience of the movie will see unavoidable deaths of humans and dinosaurs alike, dinosaur-rights activist, brutal dino-battles, and the notion that all life is precious. Some of the more memorable scenes include the volcano erupting at Isle Nublar, a brachiosaurus being left behind on Isla Nublar to die, every moment in the movie with the velociraptor Blue. Each of the aforementioned scenes were intense and captivating. The use of CGI and animatronics gives the actors and viewer a real experience to become attached to the dinosaurs or be afraid of them. Although Fallen Kingdom is guilty of the tiring jump scare, J.A. Bayona successfully added suspense to this movie. A particular scene that exemplifies this is when mercenary Ken Wheatly enters the cage of the tranquilized Indoraptor only to find out that it was feinting the whole time, so it could him and escape its cage. Jurassic World: Fallen Kingdom starts light-hearted but makes its way into a more serious tone later in the movie.

The movie starts six months after the events of Jurassic World where a team of mercenaries tries to collect bone fragments from the Indominus Rex. It is a successful feat that will help Dr. Henry Wu later in the movie but inevitably put every other character in danger. Three years after the events of Jurassic World a volcano on the fictional Isla Nublar is set to erupt and is subsequently a death sentence to all the dinosaurs on the island but charitable old man Benjamin Lockwood, John Hammond's former partner in the development of clone dinosaurs, asks for Claire Dearing and Owen Grady’s help to relocate the dinosaurs to an island sanctuary. I thought this movie started with a very peaceful and endearing lesson. The dinosaurs should be left alone in isolation and roam freely, but it gets tricky. The mercenaries hired by Eli Mills, assistant to the ailing Lockwood, plans to use the dinosaurs predominantly the more ravenous ones as auction material on the black market. The movie follows Claire, Owen, and interns, Franklin and Zia, as they uncover the reality of Eli’s plans. Jurassic World: Fallen Kingdom is a nice good action film for a weekend.

What dropped Jurassic World: Fallen Kingdom from five stars to four is the half-baked ending. While the dinosaurs are alive, I would’ve believed the ending if they had been allowed to roam an island sanctuary, where they were originally planned to be transported to. But in the end, the dinosaurs saved from Isla Nublar are set free in America across 49 states (assuming Hawaii is unreachable for the dinosaurs), Canada, and Southern America, but how will they survive? Blue is the last of her kind, so it’s not possible for her to reproduce and it’s possible anyone can shoot the dinosaurs if it meant self-defense. We’re told to believe the world will become a “Neo-Jurassic world” from a couple dozen resurrected dinosaurs. But wait, it looks like Dr. Henry Wu the former head geneticist of both Jurassic World and the original Jurassic Park escaped the events of Jurassic World: Fallen Kingdom with briefcases of his research to possibly continue cloning. It’s a scientific miracle to clone and reproduce these formerly extinct creatures and an astonishing sight to behold, but should humans and dinosaurs roam the Earth at the same time? Fallen Kingdom focuses its last minutes on the morality of cloning and life. While it leaves the movie available for a sequel, I feel like that ending tried too hard to say, “let the dinosaurs live.”

Posted by Mariah Bonifacio at 2:00 PM