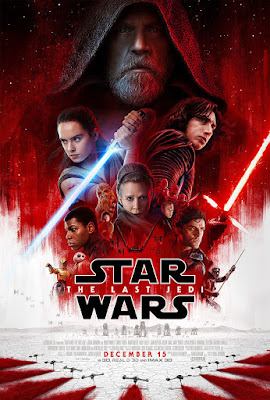 Plot Summary:
With the destruction of the Republic, the evil First Order reigns. Now, Supreme Leader Snoke looks to crush what's left of the Resistance and cement his grip on the galaxy. But hope survives: Rey has found Luke Skywalker, a legendary Jedi Master who can change the tide of war.
source

Yes, I know! It has taken me a long while to get my thoughts on this film posted. But, hey, I have had some time to think about what I watched.

Hmmm... I did enjoy returning back to this world. Like all the previous Star Wars films, this had all the elements of science fiction, action, adventure, suspense, and mystery. All that wound up in one film, but it is just with new characters (for a new generation of fans, I guess) and a few "old" characters. However, there are various points in the film that created twists in the story which made me go... "Hmmm." Well, hopefully, the next installment will clear it all up. 🤔🤔🤔 Well,

Posted by Jasmine Albitos at 1:28 AM