JASMINE's THOUGHTS on The Exorcist Season 2 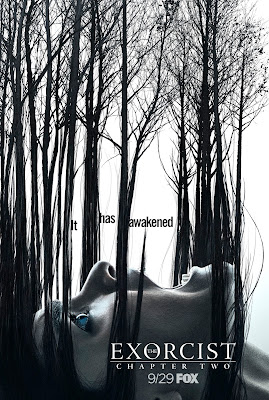 About the Show
Opening an entirely new chapter in the iconic franchise, Season Two of The Exorcist premieres Friday, September 29 (9:00 - 10:00 PM PT/ET), where FATHER TOMAS ORTEGA (Alfonso Herrera) and a newly collarless MARCUS KEANE (Ben Daniels) out of Chicago and on the road, searching out evil. Across the Atlantic, FATHER BENNETT (Kurt Egyiawan) attempts to weed out those within the Vatican who have turned against God. Ultimately, Tomas and Marcus are led to ANDREW KIM (John Cho), a former child psychologist who runs a group home for five at-risk foster children on a secluded private island off the coast of Seattle. When one of the children under Andrew’s care is targeted by a powerful force, the two priests head west, setting themselves on a collision course with Hell.

I am blown away at how good this second season was! Seriouslly!!! This second season follows Father Tomas and Marcus Keane, who is no longer a priest, on the road. It's tough being an exorcist... Right?!? They have to be absolutely sure that the person in question is possessed. Well, that's where this second season takes us. While they do come across legitimate cases, there are others that are not. Anyways, it seems that Father Tomas and Marcus path are connected in many ways. While they are fighting evil, Father Bennett and Mouse are also fighting at the other end of the world.

Since Season 1, we already got the idea that the Vatican has already been compromised. Moreover, we see that in Season 2, the situation is more dire than what we thought since Season 1. The flow from Season 1 and Season 2 was well done. They are on the road from Chicago after the events with the Rance family. They encounter other possessions. Father Tomas has an unusual gift. Whoa! We are getting deep into the paranormal/supernatural realm... Right!?! Love it! It just adds to the mysticism and mystery of it all. Definitely has that horror feel to it, too, just like the movie...haha!! I really love how the series pays homage to the film, too! If you have watched and remembered the film(s), including the subsequent sequel films, then you would caught...I guess... we can call it "easter eggs" in a few scenes...Haha! Sure brought back memories of watching those movies.

So... A lot has happened since the start of this second season. More or less, they are losing this fight with demons. Marcus is doubting himself and feels lost and discouraged. Father Tomas is embracing his gift. Mouse has now joined the fight with Father Tomas. They may have lost Father Bennett... Has he been integrated?!? Say it ain't so!!! Andy makes the ultimate sacrifice to save his family. Marcus needs to find some kind of clarity/purpose... Has he found it with the help of the voice of God?!? Will Marcus be back for the fight?!? Where will the fight take them now?!?

Ugh!!! Well, we won't know until the next season!!! Right?!? Cliffhangers... It's a love/hate relationship...Hahaha!!! Now, this series has been up in the air on this whole renew/cancel rollercoaster, but I hope the series comes and continues. The series has so much potential, especially with the various stories that can be told. I would seriously be crushed if this series does not come back. And, I know that I am not the only one who wants this series to come back for a Season 3, Season 4, so on and so forth... Right?!?

Posted by Jasmine Albitos at 12:46 AM