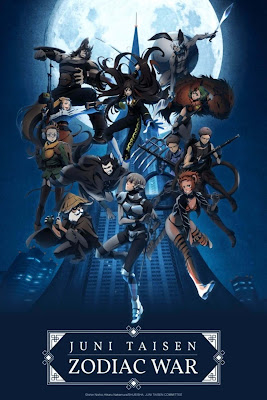 Plot Summary:
The record of the bloody battle between the twelve proud warriors—

The 12th Twelve Tournament that gets held every twelve years... Twelve brave warriors who bear the names of the signs of the zodiac fight each other for the lives and souls. The participants are twelve very strange warriors: Rat, Ox, Tiger, Rabbit, Dragon, Snake, Horse, Goat, Monkey, Rooster, Dog, and Pig.

The victor of this tournament gets to have one wish granted, whatever the wish may be. The one wish they want granted—

Who will be the final survivor?
source

What you see is what you get, when you watch the trailer for Juni Taisen. The Chinese zodiac in human form, twelve warriors, bullets, blades, and an all-out death match. I enjoy Juni Taisen because it includes all the aforementioned materials and doesn’t detract from its planned ending i.e. random romance or side jokes. Okay, maybe just a little…The twelve episodes include short battles and a backstory for the characters. The series plays with suspense by dedicating each episode to a character’s backstory and tries to get the viewer to grow attached to them, even if it’s a few minutes before they are butchered. The character designs are so appropriate for each animal in the zodiac that it is predictable, not that I’m complaining. Although, Nezumi’s rat ears look strange.

The intro and outro scenes for Juni Taisen leaves much to be desired and hardly reveal anything about the characters, the series, or their abilities. The intro and outro force the viewer to watch the episodes, but it gives the warriors cool battle poses. Save for Nezumi, who just looks fabulous. You can say it’s trying too hard to hype the series. I admired the artwork though because the transitions and mysterious vibe it gave but included in the artwork is some CGI. I thought it is unnecessary, but it intensifies the battle scenes and makes the characters look cool.

Complaints? There were many complaints or criticisms against Juni Taisen floating around the internet but specifically, the predictability of the battle royal and the lack of depth to the overall story. Because of the Chinese zodiac story or just an observant eye, the viewer will know the winner. That doesn’t change the excitement of each episode, the wonder of each warrior’s special ability, or how each of them dies. I’m glad I followed through to the very end. Even to the light novel readers or the manga readers, it’s sensational to see the words and images turn into a motion picture and brings the story to life. While the series is a bit superficial and all about the action, it touches lightly on several messages like steroids, morality, or war. The viewer will particularly see steroids from Uma’s episode.

I wouldn’t overlook Juni Taisen because of its brevity or predictability. While it isn’t the best anime of the fall season, it was entertaining.

Posted by Mariah Bonifacio at 10:40 AM