Gayle Forman & R.J. Cutler Event in B&N at The Americana at Brand & Giveaway

On a beautiful Friday morning, on August 8th, Mariah and I planned on making a day out for the Gayle Forman author event that was held at the Barnes & Noble at The Americana in Glendale! Already tired from the day before, it did not deter us from driving out to Glendale for this fun event. In addition to this event, we were meeting up with several friends as well!

As we made our way there, in the midst of some light traffic, I got a text from Sara (What a Nerd Girl Says) asking for help. Now...that didn't sound good. Of course, I wasn't text messaging at the time since I was driving, so Mariah did all the messaging...lol! Luckily, we are only minutes away, so it wasn't a long wait before finding out what was happening. It's never good when getting a "help" text...hahaha! Well, after arriving and parking, we walked over to Barnes & Noble and met up with the rest of the fangirls that were already waiting. I am still in awe, sometimes, at how beautiful The Americana is.

As soon as we met up with the girls, they were all frustrated with the staff at Barnes & Noble. Well, let's rewind a bit...When the Gayle Forman event was posted on the Barnes & Noble at The Americana in Glendale stating that it is a wristband event several weeks early, we all planned on going first thing in the morning to purchase our books and get wristbands. However, days later, the site changed its "special instruction"'; it was no longer a wristband event. Oh the frustration!!! Several friends, myself included, also called the store to confirm the details of this event; however, to our dismay, we all got different, conflicting information. I, on one hand, was discouraged about going to this event due to the mixed up information, we were all receiving from the B&N staff. The day before the event, I called the store for details, and the person I spoke to stated that the event was indeed a wristband event and the website is wrong. Kristen (Recently Acquired Obsessions) also confirmed the same information. In the end, we all decided to go to Barnes & Noble first thing in the morning for the event...thinking that the "wristband" information was correct.

Fast forward...Come to find out, the event is not a wristband event...to our disappointment. As soon as Mariah and I arrived, they told us what happened when the store opened. To my dismay, information that we received was wrong; therefore, our planned day changed. After ranting about the mess of misinformation that was received, I also went in, in hopes to speak to someone with correct information and purchase my books. I also received the same information from the staff, as well as the store manager (not the cafe manager) regarding the event being not a wristband event. Moreover, I implored to the manager if anything can be said or done to alleviate this matter for us since we were mislead (to the day of the event) about the details. The manager was kind enough to take my name and agreed to speak to the events coordinator regarding our situation....although it may not do any good, but one can hope, right!?! After speaking with the staff, manager and purchasing my books, I discussed what was said with the others, so that we can discuss a plan of action. After being told that the events coordinator will not arrive until 2 PM, we decided to go have lunch before getting in line for the event. Yes, we decided to start lining up before 2 PM to be sure we were able to sit in the discussion.

After we had lunch and arrived back to Barnes & Noble, we noticed that no other people have arrived yet for this event. We ended up starting a line about 2 PM in front of the store. After a few minutes, security asked us to move the line to the side of the store, out of the way; and we obliged with no hassle. Yes, we started an unofficial line before 5 PM...heck, after the information fiasco, we could not be sure if we were going to be the first 50 in line for the discussion. And...we were not going to let this day be a total failure! While we waited, we chatted with mall security...mind you, they weren't even aware that Barnes & Noble had an event today. However, they were pretty cool about it, and even had a barricade put up to make the line official! How cool was that! And, it wasn't even 3 PM yet! How is that for mall security...hahaha!! The waiting wasn't a total loss, we hung out, talked, laughed, saw familiar faces, and added new members to our group! A few hours later, B&N staff came out with bookmarks and Gayle Forman preview samplers for those in line for the event. They did the usual, checked receipts, gave out post-its for personalizations for our books. The excitement and anticipation grew as the minutes ticked by. 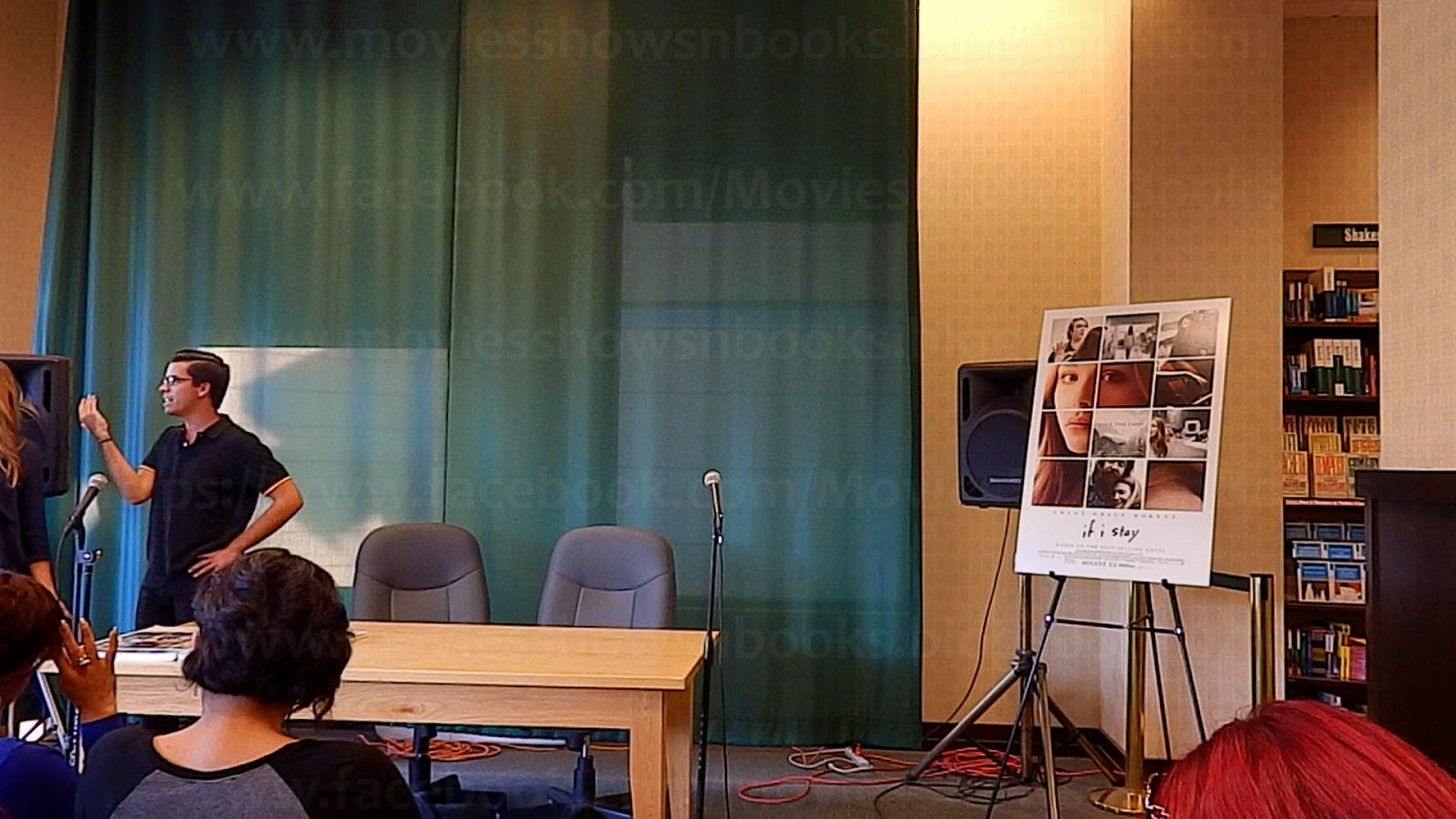 Everyone in line was soon escorted into the event area and seated before 7 PM. As people were being seated, we all were in a state of enthusiasm for the arrival of Gayle Forman and R.J. Cutler grew! Even Gayle's parents were as excited as we were! They were even wearing Gayle's t-shirts that can be purchased on her site! Yup! That's parents...showing their love and support!


The B&N staff handed If I Stay posters to everyone while we waited for the our special guests to arrive. We got posters that were made by the fans for the fans...how cool was that! We  even noticed that the photos on the poster forms a question mark...hahaha! How ingenious was that! It is a beautiful poster!


When the discussion started, the first thing that Gayle asked R.J. was that why did he choose to direct If I Stay...since he's known for directing documentaries. Essentially he stated that he's just like a 16-year-old girl...correct that, he said that he is a 16-year-old girl...hahaha!! In the sense that he thinks like one...hahaha! That's why he was able to relate to the book and direct the film. That was hilarious...even awe-inspiring. It was great to see how much passion he had put into directing this film. R.J. even stated why he was still wearing his sunglasses...yup, he was getting teary-eyed just discussing the film. Such a sensitive guy...he is! Awww... They also discussed the amazing chemistry Chloë Grace Moretz and Jamie Blackley had on set as Mia and Adam, respectively. Someone in the audience asked if there will be a Where She Went film made. R.J.'s reply was that it depends on how well If I Stay does in the theaters...so he encouraged everyone to take 5, 6, more people to watch the movie! Too funny!

It was an amazing and thought provoking discussion about the film, especially getting insight on the making of it all by Gayle and R.J. I am even more excited now to watch the film. I already get teary eyed watching the trailer! Sheesh!

Of course, the part of the event that we all were waiting for...the signing! That night, I wished that I wasn't so exhausted...I wanted to be able to chat for a few seconds with them...haha! But, I think with the exhaustion and being star-struck with them, that I was pretty much speechless...<sigh>! Other than that, they signed our books, bookmarks, and posters! It was definitely a fun event, despite the fiasco earlier during that day. Not all too happy with how the situation was handled during the morning hours that day. Loved meeting Gayle Forman and R.J. Cutler!

View the full album on this event, here!

Don't forget to enter the giveaway for a signed If I Stay bookmark at the end of this post! Yup! Got 3 bookmarks up for grabs that were signed by Gayle Forman AND R.J. Cutler!

If I Stay Trailer 2

a Rafflecopter giveaway
Posted by Jasmine Albitos at 3:18 PM