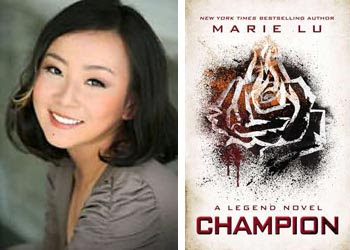 New York Times bestselling author Marie Lu went on her Champion Tour to celebrate the explosive finale to her Legend Trilogy! December 7, 2013 marked the end of her exciting whirlwind tour (in her home town) at Mysterious Galaxy in Redondo Beach, California.

Marie Lu's epic dystopian young adult trilogy was a huge hit at MG even before Legend hit our shelves. Join Marie to celebrate Champion, as June and Day deal romance, politics, loyalty, betrayal, and necessary hard choices. Publishers Weekly's starred review notes: "A happy-ever-after glow was never in the cards for these two, but Lu displays a hint of Charlotte Brontë in the resolution her characters find."

My daughter, Mariah, and I was looking forward to an afternoon with an amazing author. Although we haven't read Marie Lu's books...yet, I've read enough to know that these are books that intrigues us. And, of course, many of our booknerd friends have highly recommended her books to us as well. Therefore, that Saturday afternoon was an event not to be missed.

What started off as a beautiful Saturday afternoon turned dark with its rainy weather. Mariah and I was on our way to a fun book event celebrating the release of Marie Lu's Champion release. After Mariah attended her AP Calculus Saturday class, we were ready and on the way to Redondo Beach to meet Marie Lu. However, all did not go as planned on this Saturday afternoon. Yes, as I mentioned earlier, Saturday afternoon turned out to be a rainy afternoon which led up to slower traffic and an accident along our way to Redondo Beach. Oh the frustration...hahaha! We would have made it on time if we didn't have the weather against...LOL!  Despite the weather and traffic, we were still determined to get to Mysterious Galaxy...even if we missed the discussion and the audience Q&A. As long as we made it in time for the signing so that we could meet her was all that was left to look forward to. After getting through the traffic and rain, we made it...even though we made it to the end of the Q&A...we made it in time for the signing...yay! 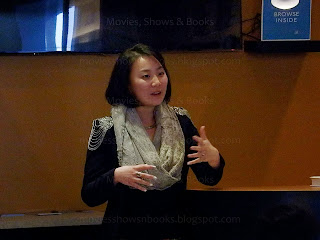 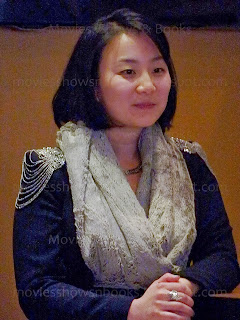 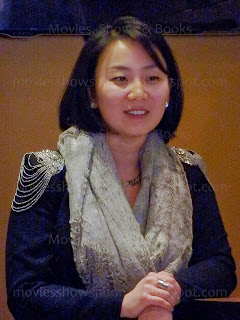 While Mariah got in line with many other fans that attended the event, I had purchased the book and found other booknerd friends. We even brought our other two books, Legend and Prodigy, that we purchased at the Los Angeles Times Festival of Books, for Marie Lu to personalize. We did have the opportunity to meet her then, but we missed the scheduled time...<sigh> No worries, there's always other opportunities to meet authors such as: book signings at bookstores, book festivals and conventions. So when we found out about the Champion Tour, we definitely planned on going. As we waited for our turn to meet and to chat with Marie Lu, we chatted with our booknerd friends that was also in attendance for this fun event.

When our turn came, we were definitely excited! I even told her that we barely made it in time driving in from Coachella. Marie Lu was happily surprised that we drove out for her event. We chatted a bit about making the drive out to meet authors and to talk about books. Marie expressed her appreciation that we came down for her in support of her books. We even chatted a bit about the Champion book trailer! I mentioned it to her that the book trailer looked like a movie trailer. Marie expressed how happy and amazed at how well the trailer was made. 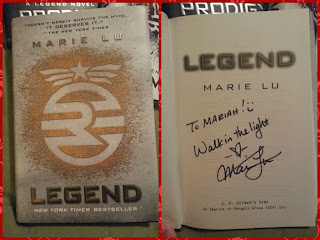 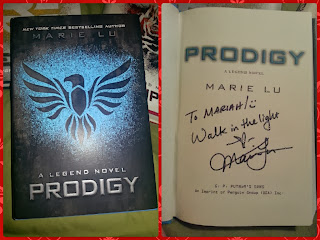 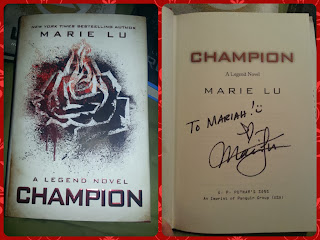 Synopsis
He is a Legend.
She is a Prodigy.
Who will be Champion?

June and Day have sacrificed so much for the people of the Republic—and each other—and now their country is on the brink of a new existence. June is back in the good graces of the Republic, working within the government’s elite circles as Princeps Elect while Day has been assigned a high level military position. But neither could have predicted the circumstances that will reunite them once again. Just when a peace treaty is imminent, a plague outbreak causes panic in the Colonies, and war threatens the Republic’s border cities. This new strain of plague is deadlier than ever, and June is the only one who knows the key to her country’s defense. But saving the lives of thousands will mean asking the one she loves to give up everything he has.

Read The Legend Trilogy from the beginning... 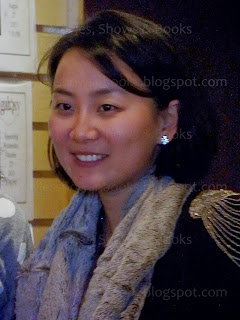 I write young adult novels, and have a special love for dystopian books. Ironically, I was born in 1984. I like food, fighter jets, afternoon tea, happy people, electronics, the interwebz, cupcakes, pianos, bright colors, rain, Christmas lights, sketches, animation, dogs, farmers' markets, video games, and of course, books. I suck at working out. I also get lost very easily, but am a halfway decent driver. At least, I like to think so. :)
I left Beijing for the States in 1989 and went off to college at the University of Southern California. California weather sweet-talked me into sticking around, so I'm currently in Pasadena with my boyfriend, two Pembroke Welsh Corgis, and a chihuahua mix. In my past life, I was an art director in the video game industry, but now I write full-time.

Thank you Mysterious Galaxy for hosting this amazing event!
Thank you Marie Lu for coming out for your fans!
Posted by Jasmine Albitos at 2:30 PM