Welcome to the Promo Blitz for...

From award winning author Katharine Ashe, comes an enchanting Christmas novella about a shy but imaginative princess and the rakish Earl who could make all her wildest fantasies come true…. 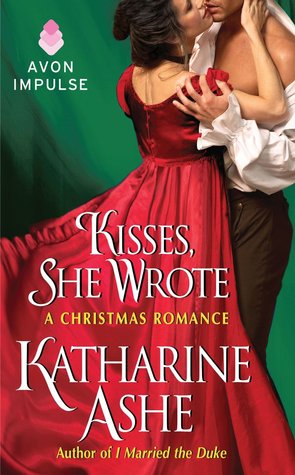 Synopsis
The Christmas season has never been so steamy.

Handsome as sin and scandalously rakish, Cam Westfall, the Earl of Bedwyr is every young lady's wickedest dream. Shy wallflower Princess Jacqueline Sensaire knows this better than anyone, because her dreams are full of the breathtaking earl's kisses. And not only her dreams--her diary too.

But when Cam discovers the maiden's not-so-maidenly diary, will her wildest Christmas wishes be fulfilled in its pages . . . or in his arms?

Excerpt
“At least you won’t be at a significant disadvantage when you wed,” the princess said thoughtfully.
“Disadvantage?”
“There is . . .” Her voice trailed off. She looked out the window and tilted her head. Her stance was relaxed. This conversation did not, apparently, agitate her as it did him.
“Princess?”
“The thing is, I have never kissed a man,” she said and looked over her shoulder at him. “Will my husband be disappointed to discover that I have no knowledge of kissing?”
Cam’s throat had gone entirely dry. If she had no actual knowledge of kissing, she certainly had excellent intuition.
“Why do you ask me?”
“I cannot very well ask my brother. How horridly embarrassing that should be.” She scowled but her eyes twinkled.
“You might ask your ladies in waiting, or the Duchess of Lycombe.”
“How would they know the answer? They are women.”
He was nonplused. “Well . . .”
She turned to him fully. “You and I are friends, so I trust you will answer me honestly. I know you have considerable experience kissing women.”
His cravat had shrunk again. “Do you?”
She lifted a single, eloquent brow. She was far too intelligent for him, and far too forthright, and he was far too accustomed to consorting with females of much less acute minds and much baser characters. She was not now flirting with him but making a statement of fact.
He nodded in silent admission.
Both brows perked now, like the shimmering feathers of a raven. “So . . . ?”
“I should think that your husband would be delighted to teach you the finer points of kissing.” And learn a thing or two in the process.
“I suppose you may be correct about that. Men like to instruct women. I think it makes them feel more in control.”
He could not hide his amusement. “You don’t say?”
“Well, doesn’t it? You are a man.”
“Good of you to notice.”
“Do you like it when you feel in control of a woman?”
“I like it when a woman feels she is getting what she wants from me.”
Her fine, expressive eyes widened. Then, slowly, she turned to the pianoforte and began rearranging the music on the stand. Cam studied the clean sweep of her back to her gently curved hips and the straight set of her shoulders. She was not petite, not enticingly round, not anything he had ever desired in a woman. But merely looking at her back and knowing what she imagined of him — of them together — made his heartbeats hard.
“I should like to give it a try before I marry,” she said without turning around. Her voice was pitched a bit low. “Kissing, that is.” She glanced at him. Her cheeks were ever so slightly pink.
“Should you?” He suspected where this was going. He’d been the object of countless women’s flirtations. But never this woman. She confined her attentions to him safely in her diary.
This was a different woman before him now.
“Yes,” she said. “I think it would be a useful experience to take into marriage. Don’t you?” She turned her hungry gaze upon him . . .

In 2012, Amazon chose Katharine Ashe's How To Be A Proper Lady as one of the Ten Best Romances of the Year. Upon the publication of her debut in 2010, the American Library Association named Katharine among its "New Stars of Historical Romance". She is a two-time nominee and 2011 winner of the Reviewers' Choice Awards for Best Historical Romantic Adventure, and her novella A Lady's Wish launched HarperCollins Publishers' Avon Impulse imprint in 2011. Her books have been recommended by Woman's World Magazine, Booklist, Library Journal, Barnes & Noble, the San Francisco & Sacramento Book Review, Durham County Libraries, and the Library of Virginia.

Katharine lives in the wonderfully warm Southeast with her husband, son, and a garden she likes to call romantic rather than unkempt. A professor of European history, she has made her home in California, Italy, France and the northern U.S. She adores hearing from readers.