Khaled Hosseini, the #1 New York Times-bestselling author of The Kite Runner and A Thousand Splendid Suns, has written a new novel about how we love, how we take care of one another, and how the choices we make resonate through generations. In this tale revolving around not just parents and children but brothers and sisters, cousins and caretakers, Hosseini explores the many ways in which families nurture, wound, betray, honor, and sacrifice for one another; and how often we are surprised by the actions of those closes to us, at the the times that matter most. Following its characters and the ramifications of their lives and choices and loves around the globe -- from Kabul to Paris to San Francisco to the Greek island of Tinos -- the story expands gradually outward, becoming more emotionally complex and powerful with each turning page.

On Tuesday, June 25, 2013, my daughter and I traveled up to Pasadena for an exciting event with Khaled Hosseini. With the release of his new novel, And The Mountains Echoed, Hosseini was on tour promoting his new release and Pasadena was one of the stops. Fortunately, I was able to get the day off to get a chance to meet him...boy, was I excited! After getting off work that morning (working the graveyard shift), I took a short nap before driving out to the All Saints Church in Pasadena where the event took place. Luckily, traffic wasn't too heavy, especially when we were on the freeway after business hours and everyone was heading home...haha! 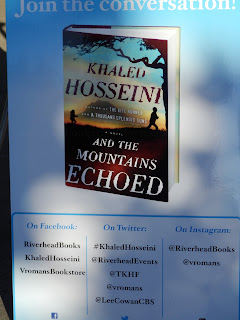 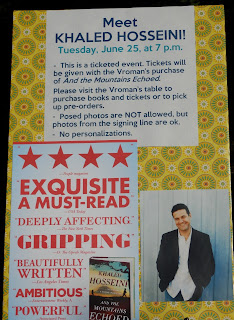 When we arrived, a good number of fans have already lined up to entire the building for the event. When doors opened at 6pm, we took our seats...more specifically pews...ha! Our host, Vromans Bookstore, had set up on the front lawn to provide Khaled Hosseini's books for purchase.  There were also quite a good amount of And The Mountains Echoed on the table that were pre-purchased and ready for pick up...my copies were among those that were pre-purchased.

As I looked around, a variety of people were already halfway through the book,while others had already read it. People were still walking in as the exciting hour of 7pm ticked closer. Before Khaled Hosseini and Lee Cowan took the "stage," a short video of what The Khaled Hosseini Foundation is about.

The Khaled Hosseini Foundation, a 501(c)(3) nonprofit organization that provides humanitarian assistance for the people of Afghanistan. The Foundation partners with the United Nations refugee organization (UNHCR) to build shelters for refugee families. It also provides economic opportunities, education, and healthcare for women and children of Afghanistan.

After watching this touching video about the conditions that Afghanistan refugees endure every day, and the efforts of The Khaled Hosseini Foundation to provide shelter for them, the discussion with Khaled Hosseini and Lee Cowan was underway.
The event started with a discussion with a brief history for Hosseini's love for writing. It was fun to find out that he began writing for fun since he enjoys writing. Hosseini first wrote The Kite Runner as a short story which he then later expanded it into a novel. In 2004, The Kite Runner came out in paperback, Hosseini was surprised to see his book being read by a variety of people.
As stated during the talk:


Hosseini: In 2004, I started to see people at airports. I sat next to people on the airplane reading my book, um, so weird (audience laughs). Oh, I couldn't believe it, I was terrified...you know, what do I do...do I say something or not say something...

Cowan: Ask if she even liked it...

Hosseini: Well, I could tell she liked it, because she was like really into it...

Wow! So funny and enlightening to listen to Hosseini's anecdotes of when he first started as an author. Among all that laughter, he also stated that it was difficult to practice medicine and write at the same time. So, in 2004, when he started to write his second novel, he requested to go on sabbatical. 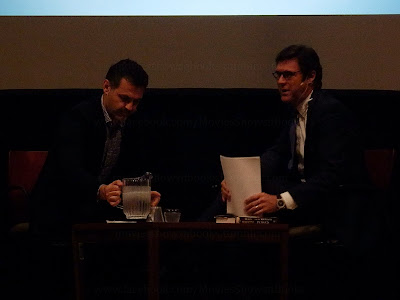 It was also interesting to learn that being a doctor wasn't really his career fascination, but he felt useful, in his own way, to society...like he said, "I liked my patients, I just didn't like the fact that they were sick." That was hilarious since, after all, doctors treats sick people. Another anecdote that he revealed, was when he would go on rounds (in 10-15 minute slots) and see his patients; during that time, his patients were spending that short time asking him to sign the book. Too funny!!

Khaled Hosseini also discussed much of the purpose of his foundation in helping and providing shelter for refugees in Afghanistan. He also revealed to the audience of his recent trip to Afghanistan in which the above video was made.  Hosseini particularly talked about two little girls that he met on that trip. These two little girls appear at the end of that video.
After the intriguing and fascinating talk about Hosseini's early year, writing, career and his foundation, the time for audience questions began. Much of the audience questions began with their stating their admiration to Hosseini and his books. One person in particular asked how he learned how to write with an abundance of description. Hosseini stated that everything he knows about writing was "self taught" and "instinctive." Wow!!! That's amazing!! Despite the long line, audience questions was cut short due to time. We still had to get to the signing part of this amazing event. 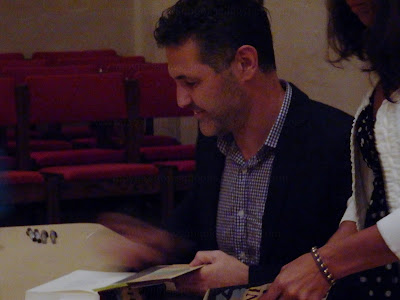 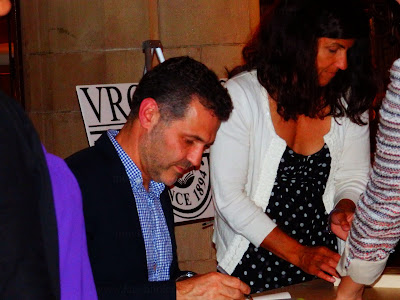 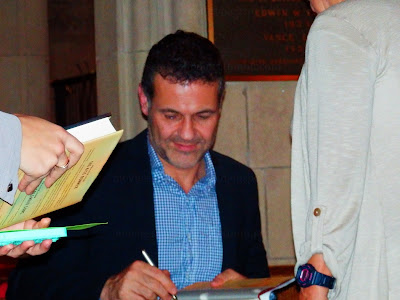 Only if there was more time, this event can go on and on.  I could go on and on about this amazing night! There's so much that Hosseini revealed to the audience, it was awe-inspiring!

Learn more about The Khaled Hosseini Foundation at:
http://khaledhosseinifoundation.org/index.php

June 25, 2013 was an amazingly enlightening night about Khaled Hosseini's life, his writing and his foundation. It's always a fun learning experience when fans learn about the lives of favorite authors. I, for one, was determined not to miss this one...among the many other author events I have attended. I definitely have an added new appreciation of all the novels that these authors put out for many fans... be it aspiring writers and/or avid readers. Meeting Khaled Hosseini and learning about his humanitarian efforts to provide shelters for refugees in Afghanistan was such a memorable and inspiring experience. The only bummer part was there was no posed pictures allowed due to time. It would have been incredibly awesome to have gotten a picture with him. He is definitely an amazing author. It was so worth the drive out from Coachella!!
To view the full album, go to my Facebook page: Movies, Shows & Books
Posted by Jasmine Albitos at 1:07 AM