Today, we have a Release Day Blitz celebrating the book birthday of Tee O'Fallon's Serve 'N' Protect, the fifth book in the Federal K-9 series. To celebrate this release, we have an exclusive excerpt to share. So... Be sure to check it out and grab your copy today! 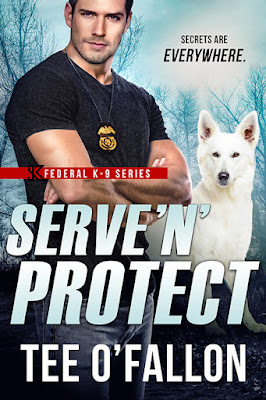 Genre:
Adult
Contemporary
Romantic Suspense
Series:
Federal K-9, #5
Publish Date:
September 20, 2021
Publisher:
Entangled: Amara
Synopsis:
Secrets are everywhere.
Ambushed and left for dead, U.S. Secret Service K-9 Officer Markus York is on the mend and laying low in a safe house while his team tracks down his attacker. But Markus isn’t good at sitting still. Even with his K-9, Ghost, for company, he gets restless and decides now is the perfect time to do some repairs around the house…and inadvertently tears open his wounds.
Fresh out of a bad relationship that ended after a car accident left her with limited mobility, freelance accountant Cassidy Morgan has sworn off men. At least, that’s the plan. Until a frantically barking dog leads her to a neighbor’s house where she finds a mysterious man out cold and bleeding on the floor...and mumbling things like “no, they’ll find me” when she tries to call an ambulance.
Yeah, that’s not at all concerning.
Despite Markus’s surly attitude, Cassidy senses there’s something else at work beneath his rugged, keep-your-distance exterior. Whatever it is, it’s sexy as hell.
With someone still trying to kill him, Markus doesn’t want an innocent to get hurt, let alone take care of him.
If only his dog wasn’t crazy in love with her.
If only the chemistry between Markus and Cassidy didn’t explode whenever they were in the same room.
If only Cassidy wasn’t a target now, too.

He jerked his head to a table on the other side of the room. “Ghost. Water bottle.”

Ghost went to the table and grabbed a water bottle in his teeth. He brought it to them, letting the bottle slip free into Markus’s waiting hand. She expected it to be punctured in at least one place, but it wasn’t.

He handed her the bottle. “You earned this.”

“Water? I earned a lot more than this.” She held up the bottle. “Try that pepperoni pizza in the bottom of my freezer. Talk nice to me, and I’ll share it with you. Oh, wait. I forgot you’re carb-free. Well, more pizza for me. If the weeds were growing outside, I’d make you a dandelion salad.”

“Actually, Little Miss Snark,” he said, setting the clipboard on the bench behind him, “that’s not a bad idea. Dandelion leaves are loaded with vitamins and antioxidants.”

“Well, don’t botanical factoids just get your heart racing?” She stood and her leg, unaccustomed to the workout, promptly gave out from beneath her.

Markus grabbed her upper arms, steadying her. Instead of releasing her right away, he just stared at her, frowning and scowling, if that were even possible. “Yeah. They do,” he murmured.

His gaze dropped to her lips and he took a step closer, cupping her face with one hand. The fresh scent of whatever soap he’d used filled her lungs, along with his own brand of sexy-as-hell man-scent. As he slowly lowered his head, her lips parted and she held her breath.

Was he going to kiss her? Did she want him to? Oh. Yeah. She did, and with every inch their mouths drew closer, her stupidly hopeful heart pounded faster.

Who knew dandelions were the way to this man’s heart?

Markus released her and when he stepped back, there was no missing the flicker of regret in his eyes. “We should get that pizza in the oven,” he said in a voice so gruff it sounded as if someone had taken sandpaper to his vocal cords.

As she watched him and Ghost go up the stairs, Cassidy breathed deeper to slow the wings of those beating butterflies in her belly. Kissing him had just leaped to the top of her Most Wanted list, but it was just as well he hadn’t gone through with it. Getting too attached to him would be in direct violation of the second item on her New Year’s resolutions list: Never, ever, get her heart broken again. Just as importantly, being kissed by him would only have given her a fleeting taste of something that wouldn’t last. Sooner or later, Markus would leave. He was part of another world, and he’d only dropped into hers temporarily.

What she ought to do was make the most of his company and his physical therapy while it lasted. Then call it good when he left.

Cassidy took a deep breath then grabbed her cane and headed for the stairs. Not that she was close to falling in love with Markus, but getting hung up on a guy like him would be stupid. It had never been in her nature to give up on love or stop hoping for it again, even if the price to be paid for love gone wrong was loss and pain, but with Markus, that pain was guaranteed.

And she wasn’t ready for more pain. 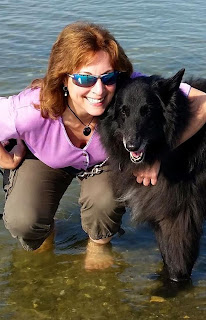 Tee O'Fallon is the author of the Federal K-9, K-9 Special Ops, and the NYPD Blue & Gold series. Tee served as a federal agent and police investigator for a 28-year law enforcement career, giving her hands-on experience that she combines with her love of romantic suspense and action-packed thrillers.
When not writing, Tee enjoys cooking, gardening, chocolate, lychee martinis, and kicking back with her Belgian Sheepdogs, Loki and Kyrie. In the summer, Tee can be found anywhere there’s a boat and calm water. Tee loves hearing from readers and can be contacted via her website.
Stay connected with Tee O'Fallon 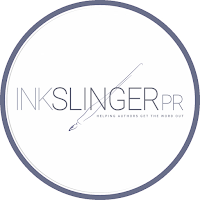