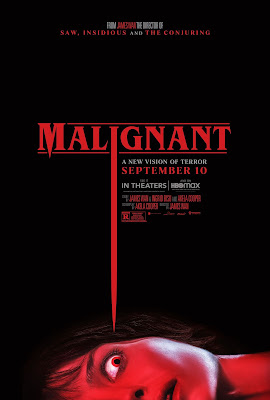 Cast:
Annabelle Wallis, Maddie Hasson, George Young, Michole Briana White, Jake Abel
(For full cast and crew on IMDB)
Plot Summary:
“Malignant” is the latest creation from “Conjuring” universe architect James Wan (“Aquaman,” “Furious 7”). The film marks director Wan’s return to his roots with this new original horror thriller.
In the film, Madison is paralyzed by shocking visions of grisly murders, and her torment worsens as she discovers that these waking dreams are in fact terrifying realities.
source
~~~~~
*My Thoughts*
Well, hmmm... It wasn't great. it wasn't bad. It has its ample amount of scares and twist. It was entertaining. I did enjoy watching it. There is such an abundant mix of movie tropes that it's not hard to miss. I guess that's what made it so different and entertaining. I did enjoy the creativity of the twist in the plot.
Not much else to say about this. Malignant was just an "meh" movie. Fans of horror/slasher movies will either enjoy it or not. Either way, I found Malignant fun to watch and creative with that twist-y plot.
My rating:

Posted by Jasmine Albitos at 2:57 PM