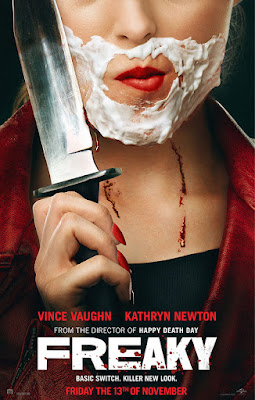 Cast:
Vince Vaughn, Kathryn Newton, Celeste O’Connor, Misha Osherovich, Uriah Shelton, Dana Drori, Katie Finneran, Alan Ruck
(For full cast and crew on IMDB)
Plot Summary:
Seventeen-year-old Millie Kessler (Kathryn Newton, Blockers, HBO’s Big Little Lies) is just trying to survive the bloodthirsty halls of Blissfield High and the cruelty of the popular crowd. But when she becomes the newest target of The Butcher (Vince Vaughn), her town’s infamous serial killer, her senior year becomes the least of her worries.
When The Butcher’s mystical ancient dagger causes him and Millie to wake up in each other’s bodies, Millie learns that she has just 24 hours to get her body back before the switch becomes permanent and she’s trapped in the form of a middle-aged maniac forever. The only problem is she now looks like a towering psychopath who’s the target of a city-wide manhunt while The Butcher looks like her and has brought his appetite for carnage to Homecoming.
With some help from her friends—ultra-woke Nyla (Celeste O’Connor, Ghostbusters: Afterlife), ultra-fabulous Joshua (Misha Osherovich, The Goldfinch) and her crush Booker (Uriah Shelton, Enter the Warriors Gate)—Millie races against the clock to reverse the curse while The Butcher discovers that having a female teen body is the perfect cover for a little Homecoming killing spree.
source
~~~~~
*My Thoughts*
The film starts with four teens being brutally slaughtered by a man in a mask, the Blissfield Butcher played by Vince Vaughn. It seems like an upfront slasher film, but the more you watch the more you will see the teen quips. Freaky (2020) plays on jump scares, teen screams, and stereotypes. The story is set in the small town of Blissfield where Kathryn Newton plays a shy teenager named Millie. She has two friends, Josh Detmer and Nyla Chones, who carry the comedy of the movie with their exaggerated expressions and screams while Millie is often cowering behind her anxiety or fears. The Butcher doesn’t make life any easier by causing everyone to go into high alert and a citywide curfew. From Millie’s encounter with the Butcher and subsequent body switch, she grows into someone openly affectionate and confident. Throughout the film, Millie and her friends try to stop the Butcher in Millie’s body and switch their spirits back into the correct body.
It’s a little cliché, but Freaky (2020) plays very well into it. There’s the stereotypical shy girl, the drama kids, a mean girl who ends up dead, and a teenage romance with a football player. While watching the film, Millie and her friends are self-aware of the situation they are in with Josh commenting how Nyla and himself were more than likely to die in a horror movie due to being a black girl and gay boy. Vince Vaugh playing an awkward teenage girl trying to stop a killer is entertaining due to the attitude he portrays in every piece of sass and squeal. Freaky (2020) makes for a nice date night option if you’re looking for something that isn’t too serious.
My rating:

Posted by Mariah Bonifacio at 11:36 AM