Today, we are kicking off this 5-day Nerd Blast + Giveaway for Dan Elish's The Royal Order of Fighting Dragons! We even have an exclusive excerpt to share, too! So... Check it out and grab your copy now!!! 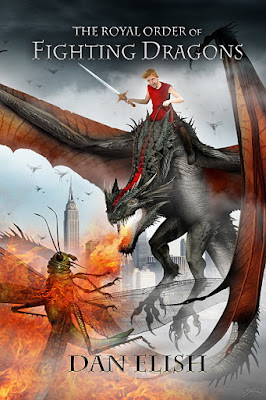 *Excerpt*
The best was yet to come. To his left, Ike saw Alexandro give Kansas City a small pinch. The dragon released a blast of fire that left a trail of smoke one hundred feet long. Ike smiled. What was he waiting for? He gave Detroit a pinch of his own and the dragon let loose a whoosh of flame that spiraled a good two hundred feet into the sky. As the fire blew out of his mouth, the beast jolted forward so powerfully Ike had to squeeze hard with his legs to keep from falling off.
“Yee-haw,” Ike cried.
“Quite a kickback, eh?” Alexandro yelled.
“Sure is,” Ike called.
“Take that, locusts!” Lucinda exclaimed.
Again, Pittsburgh proved female dragons were every bit as powerful as their male counterparts, letting fly a gust of flame that spiraled out a good two hundred feet in no more than two seconds.
Finally, it was Seattle’s turn.
“Death to the bugs,” Elmira called.
With a powerful whoosh, her dragon proved that he had the goods as well.
“Who is the best Order, eh?” Alexandro cried, whooshing by Ike.
“The Tenth Order,” Ike replied.
“You’re bloody well right it is.”
Ike laughed. The next thing he knew, the dragons were swooping this way and that, weaving in and out and around each other, flaming at anything and everything.
Suddenly there was a stealth military helicopter flying soundlessly by their side. A soldier was at the controls and another was leaning out the side with a camera.
“Hey,” he called to Ike. “Over here.”
Ike grinned widely. Holding the reins with one hand, he reached for his sword and pressed the button, exposing the blade and waving it over his head.
“I love it,” the photographer yelled.
Suddenly, Ike loved it, too. All of it. The dragons. His new friends. The thrill of standing up for himself as the rightful leader. Even the prospect of being on TV. Being “the next in line” wasn’t half bad. He retracted the sword’s blade, tucked it back in his belt, and swooped below the helicopter as the dragon let loose a thunderous blast of fire. Once he had gotten his shot, the cameraman gave Ike a thumbs up but then pointed back toward the Order.
Ike looked back over his shoulder. These dragons were even faster than he thought. After what had felt like a short ride, the Order was already a distant dot of green in the middle of a vast swath of brown. The cameraman held up six fingers. Ike understood. At the six mile radius of the no-radar zone, he tugged on the left rein, bringing the dragon on a slow arc back toward the Order.
But there was a problem. Kansas City and Pittsburgh hadn’t gotten the message. Instead of slowing down to turn back, the two dragons thundered forward, gaining speed.
“You think you can outrace me, mi compadre, eh?”
“Sure do, mate,” Lucinda cried. She was holding onto her hat with one hand and the reins with the other. “This dragon of mine’s got raw power.”
“Raw power? Your dragon? He is slower than my nonna—and she uses a walker.”
“Pittsburgh is a she. And she’ll destroy your mangy beast any day of the week.”
“Hey,” Ike yelled. “Stop.”
In a blur of light lavender and dark red, Kansas City and then Pittsburgh rocketed by.
“Wait. The no-radar zone.”
It was too late. Before Ike could stop him, Detroit had wheeled around. Flapping his mighty wings like mad, he accelerated rapidly away from the Order.
The race was on.
Copyright © 2018 by Dan Elish

Dan co-wrote the book for the Broadway musical 13with music and lyrics by Jason Robert Brown, which premiered on Broadway in 2008 and is slated to be a movie by CBS Films. Dan is also a TV writer who has worked on shows such as Cyberchase (PBS) and Jo-Jo’s Circus (Disney). Dan has received fellowships and scholarships to the Bread Loaf and Sewanee Writers’ Conferences and is represented by Matt Bialer at Greenburger Associates. He lives in New York with his wife and children. 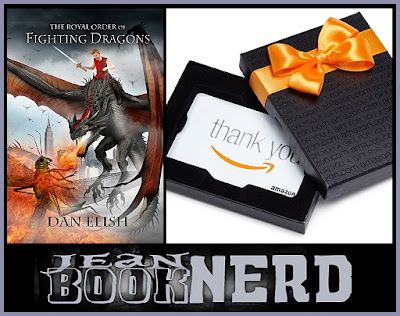