We are so excited to share with you this Cover & Synopsis Reveal for Ryder, the fourth book in the Slater Brothers Series, by L.A. Casey! 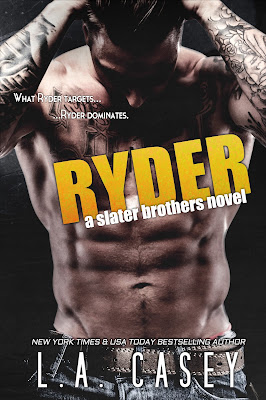 Synopsis:
Branna Murphy is broken. For months now she has been a part of a one-sided relationship to a man she loves more than life itself. She prayed for a miracle, and hoped something would change, but found that was wishful thinking.
Talking didn’t work. Shouting didn’t work. Crying didn’t work. Nothing bloody worked.
Ryder Slater is furious. For months now he has been lying to a woman he would take a bullet for in order to protect her. He is involved in something that goes deeper than his old past, and if he strays off target, people will start to die. People he loves.
He couldn’t talk. He couldn’t slip up. He couldn’t lose focus. He couldn’t do a damn thing.
Things between Ryder and Branna are at rock bottom, and Ryder knows it. Not only will he be taking on a force that could destroy his whole family, but he will be battling tooth and nail to save his relationship and keep the love of his life by his side.
Ryder targeted Branna from the first moment he saw her, and what Ryder targets, Ryder dominates.

*Excerpt*
“Who were you talking to on the phone?” he asked me, his voice so low I barely heard him.
I was a little annoyed that he asked me an invasive question when he never answered any of mine. I wanted to counter with multiple questions of my own, asking where he went every night when he thought I was asleep and why he was on his phone all the time, but I had no energy for a fight.
He wouldn’t answer me if I asked anyway; he never did.
“Just Ash who works the delivery suite with me.”
Out of the corner of my eye, I saw Ryder nod. He had never met Ash, and I rarely spoke of him, so I had no idea what was going through his mind with my response.
“Are you okay?” he randomly asked.
I was so surprised at the question that I looked at him with raised eyebrows and said, “Yes, why wouldn’t I be?”
He shrugged, staring down at me, his eyes non-blinking. “You barely cracked a smile when Bronagh was announcing she was having a girl.”
Because I did my happy dance back at the hospital when she found out.
I looked forward. “I had a long day at work, I’m just tired.”
“Too tired to be happy for your sister?”
How dare he!
“I am happy for her. I don’t need to be all up in her face to be happy for her, Ryder.”
Silence.
“It seems to me like you’re a little bit …”
“A little bit what?” I pressed.
The door of the elevator opened just as Ryder said, “Jealous.”

I stepped out of the elevator, politely nodded to the security man that manned the lobby desk, and quickly walked in the direction of the main entrance.
“Branna?” Ryder groaned. “Look, wait a second.”
I didn’t. I picked up my pace and almost sprinted out of the apartment complex. When I got outside, I nodded to the security guards at the doors and headed straight for Ryder’s Land Rover that was parked in-between Dominic and Alec’s cars.
I rushed to the passenger door and stared at the handle until I heard Ryder sigh and press on the car key, unlocking the doors. I gripped the handle, pulled the door open and got up into the car, slamming the door shut behind me.
“Damn it, Branna,” Ryder complained when he got into the driver’s seat. “Don’t take your bad mood out on my car.”
Fuck you and your stupid car.
“I wouldn’t be in a bad mood had you not said somethin’ so …”
“So what?”
“Insensitive!” I finished.
“Insensitive,” Ryder repeated and turned his body to face me. “How is me saying you’re jealous of Bronagh having a girl insensitive?”
I couldn’t even look at him.
“You aren’t stupid. Think about it and I’m sure you’ll realise why.”
Ryder didn’t move a muscle as he continued to stare at me.
“You are jealous,” he murmured then gasped. “You want a baby?”
I looked out the window, not answering him.
“Branna,” he pressed. “You want a baby?”
Without looking at him I said, “I’ve wanted a baby for years, I just never said anythin’ to you to push the issue because so much bullshit has happened to our families, and being the oldest pair we had to push everythin’ aside and make sure everyone was okay. We’re the parental figures. We make sure everyone else is doin’ good before we even consider lookin’ at our own needs.”
Ryder was silent as I spoke so I pressed on.
“You know I love kids and I probably would have had a few before I met you, but havin’ a life was put on hold when me parents died. I had to focus on Bronagh, not me, her. Bein’ a midwife was me dream, it’s the one thing I allowed meself to want. It’s why I worked me arse off to become one in me late twenties whilst raisin’ a bratty teenager.”

I glanced at him as he continued to remain silent.
“Do you think we’re at a point where we should have a kid?” he asked, and I heard the doubt laced throughout his voice.
It killed me, but I agreed with him.
“No, we aren’t in the position to raise a dog, let alone a child.”
Ryder faced forward and jammed his key into the ignition and started up his car.
“Besides,” he quipped, “we’d actually have to fuck in order to get you pregnant.”
His anger was expected.
I flattened my hands out on my thighs and resisted the urge to ball them into fists.
“We probably would if you didn’t go off every single night to do God knows what.”
The silent ‘or who’ was implied, but the words never left my lips because I was terrified if it turned out to be a ‘who’ that was the reason for him leaving every night.
I didn’t think I would be able to handle that, and decided I was better off not knowing. My sister, and the other girls, would smack me around for resorting to this way of thinking, but they didn’t know what my home life or relationship with Ryder was like.
They thought they knew, but they didn’t.
“Don’t feed me that bullshit,” Ryder growled as he pulled out of the space. “I’m home a lot and you still never put out. You left our bed to sleep up in Dominic’s old room, the furthest away from me that you can be in our house.”
I felt disgusted.
“Me purpose on this Earth isn’t to fuck you whenever you see fit.”
“No,” Ryder agreed, “but it’d be nice if I could hit it at least once a fucking week. I haven’t touched you in months. I’d settle for fucking spooning at this point.”
He spoke of me like I was nothing more than a sexual object.
“And whose fault is that?” I bellowed, throwing my hands in the air. “You’ve pulled away from me. We don’t talk, we don’t laugh, we don’t do anythin’ but fight with one another and it’s your bloody fault. You have landed us in this rut, and the sad thing is I don’t even know why! I don’t know what you do when you leave the house every night, or why you’re always on your phone, and it’s pathetic that I’ve just accepted it, but I’m too tired. I fight with you all the time, I’m too exhausted to do anythin’ else.”

I turned my head and looked out the window of the car, willing the tears in my eyes not to fall. I didn’t want to cry, I was so sick of crying.
“I’ve told you I’m takin’ care of some things. That’s all you need to know.”
I closed my eyes, gutted he still wouldn’t share his secrets with me.
“I don’t believe you, Ryder.”
“Then I don’t know what to tell you, Branna.”
“How about the truth for once?” I countered. “Just tell me where you go and what you do.”
His hands tightened around the steering wheel as we approached our street.
“I can’t tell you, you wouldn’t understand.”
I looked down to my thighs and swallowed.
“I can’t understand if you don’t help me to.”
Ryder grunted as he pulled into the car parking space in front of our house, putting the car in park. “This is on me, okay? It’s nothing for you to worry about, and you will worry if I tell you, and I don’t want that to happen. We’re all under a lot of pressure with Big Phil still out there; my business doesn’t need to be added to that.”
He got out of the car, closed the door and walked up the pathway and into our house, leaving me on my own with my thoughts.
“I can’t do this anymore,” I said aloud, forcing myself to hear the words.
We couldn’t continue on the path we were on. Something had to change, and in that moment I knew exactly what I had to do to start the healing process for the many wounds that had been cut open and exposed over the last few years.
I had to make a change. I had to separate myself from the very being that wounded me so … even if he didn’t mean to.
I squeezed my eyes shut as pain struck. The remaining fragments of my willowed heart shattered into a million pieces as I made a life changing decision. A decision that would affect not only me, but my family and friends, too.
I reached out and blindingly gripped onto the dashboard of the car to stop myself from collapsing as my mind whispered what I needed to do to be free.
I had to break up with Ryder.
Don’t cry. 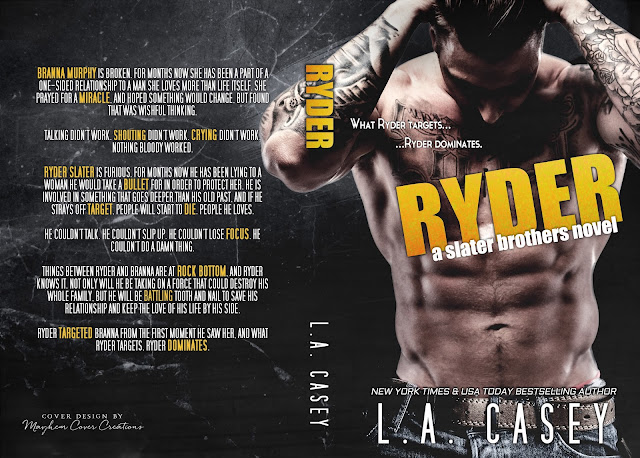 Don't miss the previous titles in the Slater Brothers Series!

L.A. Casey is New York Times and USA Today bestselling author who juggles her time with her mini-me and writing. She was born, raised and currently resides in Dublin, Ireland. She enjoys chatting with her readers, who love her humor and Irish accent as much as her books. 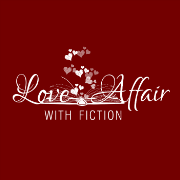