Welcome to the Official Blog Tour + Giveaway for The Affiliate, the first book of the Ascension series, by K.A. Linde! We've got an exciting excerpt and a book trailer to share with you! 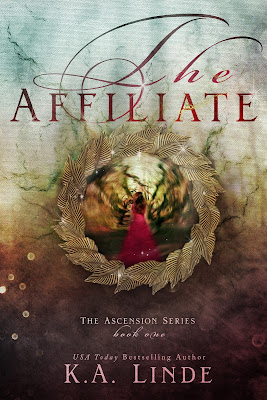 “Cyrene,” he whispered.
Their breaths mingled in the space between them. They were so close that their noses almost brushed. His hands came around her waist, and then his lips fell lightly, ever so lightly, on her own.
Time froze.
Her eyes fluttered closed, and the taste of him consumed her. His lips were tender and appreciative, covering her mouth and perfectly fitting against her. He drew her against his broad chest, and she circled her arms around his neck.
The kiss intensified. Their mouths moved in time together, leaving her head dizzy. She wobbled on the tips of her toes as he held her in place. He started walking her backward into the bedroom. His hands dug into her dress, bunching the material around her waist. Her knees hit the footboard of the massive bed, and she could barely breathe as she realized where this was all going.
And still, she didn’t stop. The spark had turned into an inferno, flames engulfing them, and they were trapped in the blaze that was their passion.
His hands slid up to cup her face before easing into her hair. “Cyrene,” he murmured between kisses, “stay with me.”