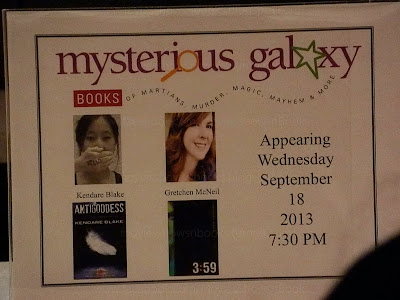 Meeting new authors is always fun, especially when their books are in genres that I love to read. That was the case on September 18, 2013 when Mysterious Galaxy Bookstore, in Redondo Beach, California, hosted this fun and exciting author event!

Yup! Mariah and I had this fantastic opportunity to meet two YA authors, Gretchen McNeil an Kendare Blake, who writes teen horror/suspense. Although I have not read any of their books, I was definitely excited to learn more about these authors and their books. That night, Gretchen McNeil and Kendare Blake were promoting their latest book releases, 3:59 and Antigoddess, respectively. Mariah and I also learned quite a bit about these amazing authors and how they come up with these stories.

Video clips of this amazing event with Gretchen McNeil and Kendare Blake.

I have always found it amazing and inspiring that these writers build these worlds in their books that can "whisk" readers away and "experience" the adventures, the chaos, the drama...even romance... in these stories that they write! Now, Gretchen and Kendare's books takes their characters on a more creepy and scary "road." I am definitely excited about reading their books of teen horror.

On this night, the following new books is the latest in teen horror/suspense by these two amazing authors...

About the Book
Josie Byrne's life is spiraling out of control. Her parents are divorcing, her boyfriend Nick has grown distant, and her physics teacher has it in for her. When she's betrayed by the two people she trusts most, Josie thinks things can't get worse.Until she starts having dreams about a girl named Jo. Every night at the same time—3:59 a.m.Jo's life is everything Josie wants: she's popular, her parents are happily married, and Nick adores her. It all seems real, but they're just dreams, right? Josie thinks so, until she wakes one night to a shadowy image of herself in the bedroom mirror – Jo. Josie and Jo realize that they are doppelgängers living in parallel universes that overlap every twelve hours at exactly 3:59. Fascinated by Jo's perfect world, Josie jumps at the chance to jump through the portal and switch places for a day.But Jo’s world is far from perfect. Not only is Nick not Jo's boyfriend, he hates her. Jo's mom is missing, possibly insane. And at night, shadowy creatures feed on human flesh.By the end of the day, Josie is desperate to return to her own life. But there’s a problem: Jo has sealed the portal, trapping Josie in this dangerous world. Can she figure out a way home before it’s too late?

About the Book
The Goddess War begins in Antigoddess, the first installment of the new series by acclaimed author of Anna Dressed in Blood, Kendare Blake. Old Gods never die…Or so Athena thought. But then the feathers started sprouting beneath her skin, invading her lungs like a strange cancer, and Hermes showed up with a fever eating away his flesh. So much for living a quiet eternity in perpetual health.Desperately seeking the cause of their slow, miserable deaths, Athena and Hermes travel the world, gathering allies and discovering enemies both new and old. Their search leads them to Cassandra—an ordinary girl who was once an extraordinary prophetess, protected and loved by a god. These days, Cassandra doesn’t involve herself in the business of gods—in fact, she doesn’t even know they exist. But she could be the key in a war that is only just beginning. Because Hera, the queen of the gods, has aligned herself with other of the ancient Olympians, who are killing off rivals in an attempt to prolong their own lives. But these anti-gods have become corrupted in their desperation to survive, horrific caricatures of their former glory. Athena will need every advantage she can get, because immortals don’t just flicker out. Every one of them dies in their own way. Some choke on feathers. Others become monsters. All of them rage against their last breath.The Goddess War is about to begin.

Posted by Jasmine Albitos at 7:00 PM