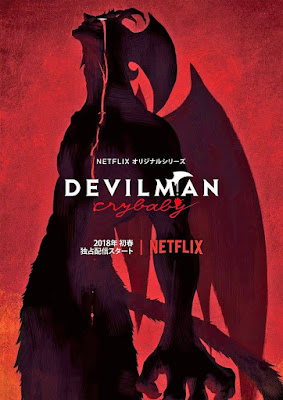 Voice Cast:
Koki Uchiyama, Ayumu Murase, Megumi Han, Ami Koshimizu, Atsuko Tanaka, Rikiya Koyama, Avu-chan, Kenjiro Tsuda, KEN THE 390, Subaru Kimura, Young Dais, Hannya, AFRA
(For full cast and crew on IMDB)
Plot Summary:
With demons reawakened and humanity in turmoil, a sensitive demon-boy is led into a brutal, degenerate war against evil by his mysterious friend, Ryo.
source
泣き虫の高校生・不動明は、幼なじみの飛鳥了と再会し、
危険なパーティに誘われた。
そこで明は見る。悪魔に変わっていく人々を。
そしてまた明自身も……。
source
~~~
*My Thoughts*
Short, ten episodes, yet captivating, that is what Devilman: Crybaby is. It is a Netflix series that follows Akira Fudo, a track student, and a boy with a heart of gold, but one day his childhood friend Ryo Asuka appears. Ryo brings him to a Sabbath, more like a rave, where everything turns sour when Akira is possessed by the demon Amon and turned into what he calls a Devilman. The conflict is easy to follow and although characters are quickly introduced and tossed aside rather quickly, Devilman: Crybaby will get its audience somewhat attached to them. Although there are minor details to different characters sprinkled into each episode, they eventually tie up into the final episodes. What do we learn by the end? Humans are the demons and vice versa.
My rating:

Posted by Mariah Bonifacio at 10:18 PM