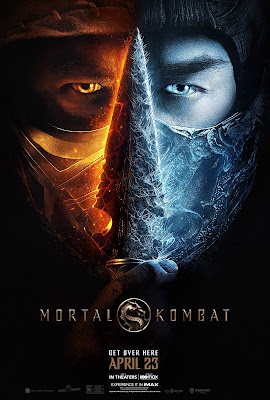 Cast:
Lewis Tan, Jessica McNamee, Josh Lawson, Hiroyuki Sanada, Joe Taslim, Tadanobu Asano, Chin Han. Mehcad Brooks, Ludi Lin, Max Huang, Matilda Kimber, Laura Brent
(For full cast and crew on IMDB)
Plot Summary:
From New Line Cinema comes the explosive new cinematic adventure “Mortal Kombat,” inspired by the blockbuster video game franchise, which most recently enjoyed the most successful video game launch in its history, Mortal Kombat 11. The film is helmed by award-winning Australian commercial filmmaker Simon McQuoid, marking his feature directorial debut, and produced by James Wan (“The Conjuring” universe films, “Aquaman,”), Todd Garner (“Into the Storm,” “Tag”), McQuoid and E. Bennett Walsh (“Men in Black: International,” “The Amazing Spider-Man 2”).
In “Mortal Kombat,” MMA fighter Cole Young, accustomed to taking a beating for money, is unaware of his heritage—or why Outworld's Emperor Shang Tsung has sent his best warrior, Sub-Zero, an otherworldly Cryomancer, to hunt Cole down. Fearing for his family's safety, Cole goes in search of Sonya Blade at the direction of Jax, a Special Forces Major who bears the same strange dragon marking Cole was born with. Soon, he finds himself at the temple of Lord Raiden, an Elder God and the protector of Earthrealm, who grants sanctuary to those who bear the mark. Here, Cole trains with experienced warriors Liu Kang, Kung Lao and rogue mercenary Kano, as he prepares to stand with Earth’s greatest champions against the enemies of Outworld in a high stakes battle for the universe. But will Cole be pushed hard enough to unlock his arcana—the immense power from within his soul—in time to save not only his family, but to stop Outworld once and for all?
source
~~~~~
*My Thoughts*
Well... 🤔 This was an entertaining film. Story-wise... Eh.🤷‍♀️ Fight scenes/visual effects... Nice! Bloody... Yup! Setting up for more... Yes, it does!
It has been years since I even learned about the game, way back when, so remembering all the players.... Well, I don't... Ha! Let alone the new characters that have been created and evolved since. Anyways, for the most part, the movie had familiar characters that I do remember.
I liked the beginning which set the story between the characters Sub-Zero and Scorpion rivalry. Although the story just didn't feel like it was developed enough, I thought there should have been more to the movie. It gave enough to set up the characters and story in general. I also enjoyed some of the light humor that was mixed in. That Kano... Haha! Such a jackass. 🤣 With that being said, I thought the cast was a good fit for the characters. As the story unfolded, it felt more and more like an opening for more stories in the Mortal Kombat universe.
All in all, Mortal Kombat is an entertaining film with all that magic, humor, slight drama, and those fight scenes. I would like to see more since this left it open for more stories to tell in this Mortal Kombat universe.
My rating:

Posted by Jasmine Albitos at 9:48 PM