We have a 5-day Book Blitz to share for V.C. Buckley's Hazakura, the exciting sequel to Hanami! Today also happens to be its book birthday! So... We celebrate today with an exclusive excerpt, a book trailer, AND a cool blitz-wide giveaway! So... Check it out and grab your copy now! 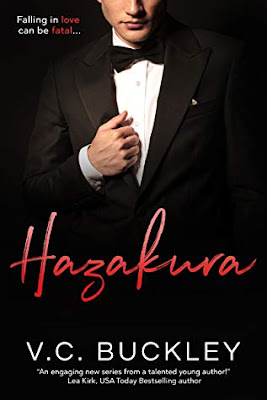 Synopsis:
The most awaited sequel to the award winning book, Hanami.

Kenjin Kiyohara, the son of Asia’s most powerful tycoon has finally won the heart of Sakura Shintani, the heir to Japan’s most notorious crime dynasty. But their new love is threatened by a sadistic adversary who sees Kenjin as Sakura’s only weakness. And as the threats start coming in, Sakura worries for Kenjin’s safety and starts to doubt her decision to be with him. But Kenjin is determined to stay by her side and prove that he can hold his own inside the treacherous world that she belongs to, even if it might cost him his life.

*Excerpt*
“Is this seat taken?”
Jin looked up to see Jiaolong’s lanky frame standing over him. His former rival used to intimidate him, but now he was strangely glad to see him. Especially after what he’d done for Sakura.
“It’s yours,” Jin answered. He stood up to acknowledge Jiaolong with a handshake.
Jiaolong smiled, unfastening the button of his black blazer before lowering himself into the foldable seat.
“Sakura told me about what you did,” Jin said. “Thank you.”
Jiaolong shook his head, still smiling. “No, don’t thank me,” he said. “I didn’t do it for you.”
Jin rolled his eyes. He was the same old Jiaolong.
“You do know this puts us on an equal footing now, don’t you?” Jiaolong’s words made Jin straighten up in his seat.
“How so?” he asked.
Jiaolong relaxed in his seat, crossing his legs. “The serum we made is as good as your hug. Maybe even better… because it will be capable of keeping her safe even when you’re not around.”
Jin arched an eyebrow. “What are you trying to say?”
Jiaolong shrugged, his lips breaking into a grin. “I stepped aside for you back then because you could keep Sakura safe from herself while I couldn’t. But now, the serum has changed everything.” He threw his gaze back at Jin. “I guess I don’t have to give way to you anymore. Because now, I am just as capable as you.”
Jin blinked. The vein in his head started to throb. Was this guy serious? “Sakura’s already mine,” Jin declared, aware that his tone had changed. “You’re too late.”


“You’re probably right. No one else can claim Sakura,” Jiaolong said, crossing his arms as he shifted his weight in the chair. “Unless, you’re dead.” A smile spread across Jiaolong’s face.

Sequel to:
(cover links to Goodreads) 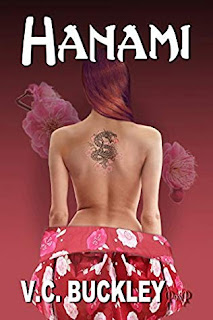 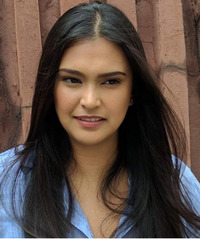 V.C. Buckley was born in a secret government facility and was shipped off to an Island in Southeast Asia. She grew up braving tropical thunderstorms and warding off evil characters. At sixteen she jetted all over the world after being discovered by an agent. Her stories come from gritty moments of her childhood to the glitz of her travels. She now lives in Manila with her husband, two kids and an herb garden that has hijacked her balcony.

Giveaway Open Internationally
Note: Not responsible for Lost or Damaged Prizes in Your Mailbox
a Rafflecopter giveaway
Book Blitz Organized by