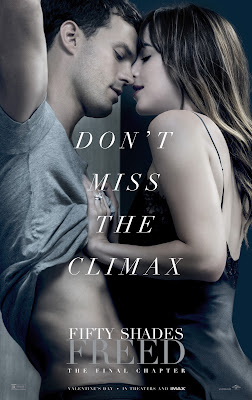 Believing they have left behind shadowy figures from their past, newlyweds Christian and Ana fully embrace inextricable connection and shared life of luxury. But just as she steps into her role as Mrs. Grey and he relaxes into an unfamiliar stability, new threats could jeopardize their happy ending before it even begins.
source

What can I say for the finale, Fifty Shades Freed? It tried to go out with a bang but ended in a whimper. The entire movie felt like rushed drama. To start, the story had been set up for a troubled marriage. Ana and Christian have a seemingly perfect marriage for the first few days. He introduces her to all the fancy and luxurious advantages that she now has such as a new car, a house she is allowed to redesign, and a personal chef. It isn’t until Ana gets pregnant that the conflict intensified. Despite being married, they did not talk about having children and went into everything on impulse. The lack of development to their relationship was addressed, but it did not find a resolution until Ana’s life was in danger. At the same time, Ana’s stalker, Jack Hyde, comes forward to wreak havoc on their lives by trying to get revenge on Christian for their loosely connected past. As it turned out, Jack and Christian shared a foster home until Christian was adopted by the Grey family. Jack had then held a grudge against Christian since then.

Although the viewer was given more backstory on Christian, the character did not have much appeal nor was he very relatable. Anastasia gets a little character development thanks to getting married to Christian as she now realizes that he is sharing his wealth with her and his undying love. She seems more confident and willing to have more adventurous sex with him. The conflicts in the movie can be summarized as such, “they were all somehow loosely connected by Ana and Christian’s past.”

The side and minor characters had more appeal than the main characters of the Fifty Shades series. They didn’t need long periods of time to either be likable or annoying. On a side note, I appreciated Ana’s wardrobe design, where she went from a homely college student to a professional editor. Her wardrobe was sophisticated with white, shades of cream, or black colors. While on occasion, she would wear a dress appropriate at a club with her friends. Her wardrobe might have been the only way to hint to her character having personality. As much as I wanted to think of Fifty Shades Freed as any another book to big screen, but it was insipid.

Posted by Mariah Bonifacio at 11:34 AM