Welcome to the Official Blog Tour for Thommy Hutson's Jinxed!!! Today, on our tour stop, we have a review, an exclusive excerpt, AND a tour-wide giveaway to share! Not only that, we also have a book trailer to share, too! So... Check it out and grab your copy now!!! Follow the tour, HERE!!! 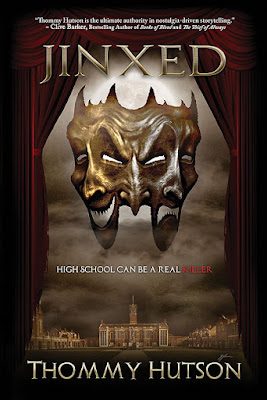 Synopsis:
High School Can Be a Real Killer

*Excerpt*
“There’s no way off the island until Monday,” Daniel said to Max, after returning from checking the perimeter. He shook off his hat, which was slick with moisture. “What we need to do—”
“Listen, jackass,” Max exploded. He picked up the manuscript splayed out on the table. The thing that had caused so much trouble, so much pain. So many secrets.
“You don’t get it, neither of you,” he added, looking from Daniel to Parker and back again. “It’s all right here in these pages. What’s going to happen, how it’s going to happen. The messed up thing is we still don’t know why, and I blame McKenna for that. If you two don’t do something to get us off this rock, one by one, we are going to die.”
Max looked at Layna, whose eyes roamed across everyone in the room. He knew she was thinking exactly what he was.
Who would be next? Who was doing this?
Max also wondered who was going to help them, if not Daniel or Parker.
Nancy grabbed the script from Max’s hands. “Jesus Christ, if you’re all gonna sit there and act like Helen Keller, I’ll figure it out.”
“What I’d like everyone to do is calm down,” Parker said calmly. “We’ll find everyone, stay together, and we will get off the island safely.”
“You did a bang-up job with Alice,” Max said. “If you had listened to me—” But he stopped himself. More to the point, the lump in his throat stopped him.
Layna grabbed his hand and locked her fingers with his, turning toward Nancy as she flipped through the script. “Well?”
Nancy stopped turning pages and slowly ran her finger across the lines of black ink. “It isn’t specific,” Nancy offered, “but this is what it says.”
Parker stood. “Before anybody starts jumping to conclusions, let’s remember this is a piece of fiction.”
Max shook his head in disbelief, even as he watched Daniel nod his. “It’s a piece of fiction somebody wants to turn into a really cuckoo town, real life Afterschool Special,” he stated. “Maybe, ‘I Was a Teenaged Murder Victim?’ So, I’m all ears, Nancy. Go ahead.”
Parker cocked his head and Max felt the man was unhappy with the attitude he was throwing. But Max didn’t care. And he didn’t like the detective.

[Hutson] creates a gore-filled throwback to the classic teen slasher flick genre … Graphically detailed descriptions make it clear that this work of horror isn’t for the faint of heart. ―Publishers Weekly

Thommy Hutson’s ‘Jinxed’ is a Must Read for Classic Horror Fans (linked to full iHorror review)
“Hutson … knocked it completely out of the park … with an expertly paced, cinematic slasher in a setting that would make Agatha Christie proud.” ―Waylon Jordan, iHorror.com

“…gory but captivating … a masked murderer starts picking off the teens, killing them all in theatrically grisly ways. … entertaining” ―School Library Journal

“Thommy Hutson is the ultimate authority in nostalgia-driven storytelling.” ―Clive Barker, Bestselling Author of Books of Blood and The Thief of Always

“Jinxed is the teen whodunit that Wes Craven and Lois Duncan never made. Hutson has created the best new slasher franchise since Scream.” ―Peter M. Bracke, Author of Crystal Lake Memories: The Complete History of Friday the 13th

“A dark, tension-filled thriller that’s wicked to the very end. Bad luck was never so much fun!” ―Jeffrey Reddick, Creator of Final Destination

**About the Author**
Born and raised in Upstate New York, Thommy Hutson graduated from UCLA and launched his career co-writing the story for the Warner Bros. animated hit SCOOBY-DOO IN WHERE’S MY MUMMY? He followed that with co-writing the concept and additional material for CHILL OUT, SCOOBY-DOO!

His career then took a thrilling turn when he wrote and produced several definitive genre film retrospectives for television and home entertainment: SCREAM: THE INSIDE STORY (Bio Channel), NEVER SLEEP AGAIN: THE ELM STREET LEGACY (Bio Channel), MORE BRAINS! A RETURN TO THE LIVING DEAD (Chiller) and HIS NAME WAS JASON: 30 YEARS OF FRIDAY THE 13th (Starz/Anchor Bay).

Thommy also wrote the screenplay for Syfy Channel’s supernatural horror film TRUTH OR DARE, which was a trending topic on social media the night of its release.

As an author Thommy crafted a limited-edition coffee table book detailing the making and legacy of Wes Craven’s 1984 classic A NIGHTMARE ON ELM STREET. A trade version distributed by Simon & Schuster reached number one in Amazon.com’s Movie History & Criticism category. His latest novel, the teen thriller “Jinxed,” (Vesuvian Media) is the first book of a trilogy and has been called “A must-read for classic horror fans…Inevitable and shocking. Brutal and beautiful. Homage and originality…Hutson could easily take on the mantle as the next Lois Duncan.”

He is currently scripting a film for The Hallmark Channel as well as writing another book that definitively details the history, making, and legacy of another fan-favorite genre film from the 1980s.

A member of the Producers Guild of America and Horror Writers Association, and an aficionado of horror and teen movies from the 80s and 90s, Thommy continues to develop unique, compelling, and provocative projects across multiple genres for film, television, publishing, and home entertainment through his company Hutson Ranch Media.

“Jinxed in local theaters near you,” is what I would like to say for Thommy Hutson’s book. The story is a thriller and mystery that kept me wondering what is going to happen next. Or more specifically, who is going to die next and how. Jinxed holds suspense and death brought about in the fashion of old superstitions. The setting and the story are perfectly executed much like a slasher film from my childhood.

Jinxed is set in Trask Academy of Performing Arts a high school isolated by a surrounding body of water with little to no way of communicating with the outside world. And therefore, an ideal hunting ground. Hutson’s main character Layna Curtis is a talented, bright-eyed, and promising young star. She is pleasant, to say the least, a survivor, and a beautiful young lady who does not let all her emotions cloud her judgment. Layna’s friends are all anyone could ask for at a high-pressure school and heavy stakes environment. They are just as talented as Layna, supportive, and easily taken out one-by-one. Hutson describes their deaths in gruesome detail without being overbearing. With each death, the characters are increasingly wary of each other and their anxiousness builds.


The twists and turns that led to Layna as the last victim had me questioning what each character’s alibi was, their story, and their whereabouts. Jinxed was wickedly written and flowed with its’ tense mood. The mystery and thrill all lead up to the finale that kept me craving more. 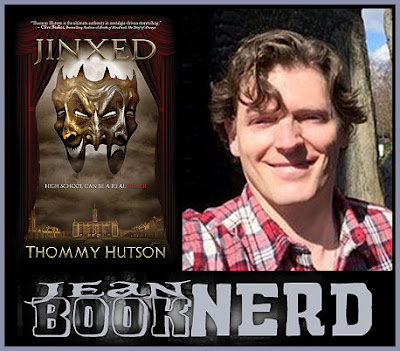 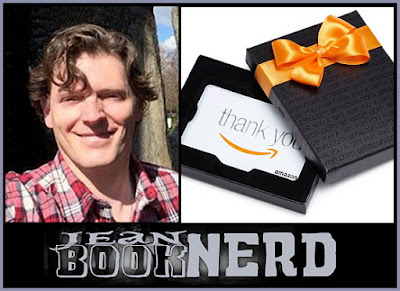