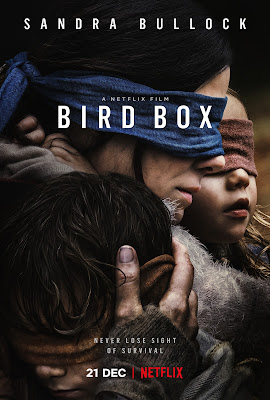 Based on the Novel by:
Josh Malerman

Plot Synopsis:
Five years after an ominous unseen presence drives most of society to suicide, a survivor and her two children make a desperate bid to reach safety.
source

Bird Box is an interesting post-apocalyptic thriller because something important yet so simple is taken from Malorie and the survivors, their eyesight. Never mind the obvious in a post-apocalyptic world where they lack electricity, have to search for supplies, or scramble against other survivors. In Bird Box, Malorie and the others are not even allowed to look out their windows or else they will die. The setting of the film is plain, quiet, and eerily serene since they are stuck in a house, but it adds to the tension of the entire film. The isolation causes them to fear others. Any stranger and contact from the outside world can potentially cause chaos in the survivor’s small home. The world, outside of the house, is the remains of civilization before the mass suicides with not a sane person to be found.

The progression of Bird Box jumps back and forth from present day Malorie with her two kids to five years prior, when the unseen presence starts disrupting her overall peaceful life. In jumps to the past, the viewer sees the world from Malorie’s perspective and she converses with the other survivors in the house. As a viewer, most of the characters in the house are not wholly relatable before being quickly killed off. How did the survivors make it for five years? What happened to basically everyone, the rest of the world? It’s hinted that they are killed, but do I assume they are all just dead? Bird Box left a few loose ends, but the character development isn’t so bad. We get short snippets of old man Douglas’s and Greg the owner of the home’s life based on Malorie’s conversations with them. Even though Malorie is the central character, I found some of the other characters like Charlie and Olympia interesting, but they are left with almost nothing. Speaking of which, the children seem to act as a metaphor to the now isolated world. Being born at the beginning of the unseen force’s emergence into the North American continent, Girl and Boy have very little knowledge of the world other than how to survive and stories told to them. Given what little they have, their personality is almost nonexistent.

Overall, Bird Box tries to bring home the message of emotional maturity when everything else has fallen apart. It is suspenseful and unnerving, especially because the post-apocalyptic threat is not something the survivors can shoot to kill. Overall, character development was lacking but the setting and Malorie provided a nice balance to that.

Posted by Mariah Bonifacio at 3:32 AM