Welcome to the Official Blog Tour + Giveaway for Azaria M.J. Durant's Broken Arrow, the first title in the Darkened Destiny Saga!!! Today, on tour stop, we have an interesting guest post to share! Let's find out what are Azaria's "Top 5 Stories that Influenced Your Writing." So... Take a look at what at her top 5 stories are! Check it out and grab your copy today! Follow the tour, HERE! 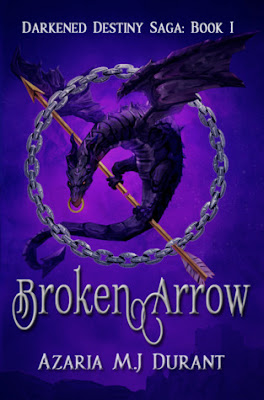 Synopsis:
An ancient power long kept dormant stirs in the shadows once more as one boy embarks on a quest to earn his freedom and the freedom of his world!

Magic has turned to myth, the Vaelhyreans of old to legend, and the power wielded by the ancients has long been forgotten. However, with Ealdred, a mere half-breed slave boy, myth becomes real, the forgotten remembered, and the power of legend is reborn within him.

Ealdred is merged into a world of mystery, brimming with deceit, where the remaining Vaelhyreans are in a desperate fight for their very survival. When Ealdred is kidnapped by the power-mongering dark lord Zeldek himself, he must make a choice; to commit his newfound magic to Zeldek’s service or die. But when he meets Bellator, clever yet treacherous servant of Zeldek, an alternative is presented to him: to escape from Zeldek’s stronghold and embark on a quest to find a cursed arrow and free the Vaelhyreans from the spell that keeps their powers at bay.

Yet how can he survive in a world where magic is illegal, half-breeds are hated, and the four countries are on the brink of war?

Top 5 Stories That Influenced Azaria M.J. Durant's Writing
1. The Hunger Games by Suzanne Collins. This is the story that influenced my writing the most, both in style and in creating high stakes. It was while reading The Hunger Games for the first time that I came up with the original idea for my debut novel Broken Arrow. I was fourteen at the time, and hadn’t really found my own style yet, but it was this story that gave me my love for both reading and writing first person, and also inspired Bellator as a character.

2. How to Train Your Dragon. The biggest way HTTYD influenced my writing was with my main character, Ealdred (Broken Arrow). Hiccup and Ealdred are very similar in many ways; both starting out as shrimpy kids that are a disappointment to everyone around them, and both growing up to stand above the rest. And both of them have some pretty good sass. Conversation is probably my weakest point, so I learned a lot about dialogue from watching these movies over and over again.

3. Lord of the Rings by JRR Tolkien. Lord of the Rings was one of my favourite series growing up, so naturally I gleaned a lot about writing from it. The biggest thing I learned was world-building. I’m already a world driven writer, so intricate, detailed worlds and cultures fascinated me. But I’ve never seen a story that fleshes out its world as well as JRR Tolkien fleshed out Middle Earth. It’s been an inspiration to me while working out my own.

4. Eragon by Christopher Paolini. This story influenced me long before I ever watched the movie, and I haven’t even read the book yet. Christopher Paolini was a young author just like me who made it in the self-publishing world, so that really is very influential to me, as a young writer trying to make it in the self-publishing world. Not only that, but I came up with a couple of my characters from seeing pictures of the movie characters from Eragon on Pinterest.

5. The False Prince by Jennifer A. Neilson. This was the first book that I’d read where the main character actually blatantly lies to the readers, and that was fascinating to me. Sage is a very interesting main character in that we can see what’s going on in his head, but he’s actually lying to us in his thoughts. It really helped to influence the way I write my plot twists; completely unexpected!

Bonus Story! Star Wars. I first watched everything Star Wars in 2015. I’m a prequel’s fan (#notsorry), and watching Anakin’s fall to the dark side really just hits me every time. I love, love, love the idea of a fallen hero becoming a redeemable, yet epic and terrifying villain, and seeing those they leave broken behind.  Obi-Wan kills me every time. That especially has influenced the way I write my villains. Meet the villain, love them evil. Watch them unravel before your eyes until you have to love their broken pieces too. And see those they left behind, broken and alone. Not that I keep to that system either. To use Ealdred’s words, “I would hate to be predictable.” 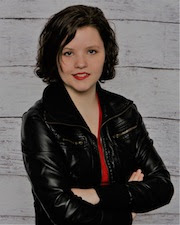 Azaria M.J. Durant is a young, passionate writer of fantasy with plans to branch out into sci-fi and dystopian. She enjoys writing stories with action, adventure, unexpected plot twists, and fleshed out characters that challenge gender roles and expectations.

Azaria lives in Atlantic Canada with her family, cats, and dogs, and her big dreams to travel the world. In the moments when she isn’t writing, she is sketching concept art for her stories, participating in community theatre, or curled up with a good book and a bag of mint chocolates.