Today, we are kicking off a 5-day Nerd Blast + Giveaway for Linsey Miller's Ruin Of Stars, book 2 and conclusion in the Mask Of Shadows duology! Check it out and pre-order your copy now!!! 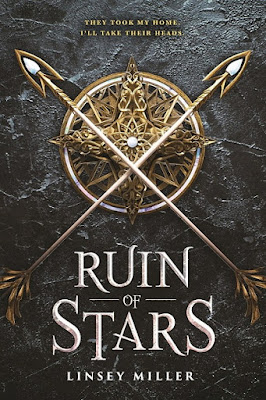 Synopsis:
As Opal, Sal finally has the power, prestige, and most importantly the ability to hunt the lords who killed their family. But Sal has to figure out who the culprits are before putting them down. Which means trying to ignore the fact that Elise is being kept a virtual prisoner, and that the queen may have ulterior motives.

And the tales coming out of north are baffling. Talk of dark spirits, missing children, and magic abound. As Sal heads north toward their ruined homeland and the lords who destroyed everything, they learn secrets and truths that can't be ignored.

Praise for MASK OF SHADOWS

"An intriguing world and a fantastically compelling main character make for a can't-miss debut. Miller's Mask of Shadows will make you glad you're not an assassin―and even gladder Sal is." ―Kiersten White, New York Times bestelling author of And I Darken and Now I Rise

Praise for Mask of Shadows: "Miller's gritty, lightning-paced debut features a rough-and-tumble yet movingly vulnerable protagonist: Sal is uncompromising in their convictions, and doesn't hesitate to kill when necessary but wishes to be more than just a weapon of vengeance. A complex but intriguing start to this planned duology." ―Publishers Weekly

Praise for Mask of Shadows: "This is a memorable, sharply written character. While readers who identify on the GLBTQ spectrum may be easy fans as Miller handles Sal's identity with aplomb, that's certainly not the only point of note here; the impressive, intricate world building, tense action, and fierce competitors are equally strong." ―The Bulletin of the Center for Children's Books

Praise for Mask of Shadows: "Gory, well-plotted, suspenseful on every page, and poised for the sequel." ―Kirkus

Praise for Mask of Shadows: "This fantasy's gender-fluid protagonist, Sal Leon, makes Miller's book worth picking up for diversity's sake alone. Her treatment of the gender issue is most notable in that it isn't really an issue... Violent and action-packed, this offering by first-time novelist Miller will circulate." ―School Library Journal

"Sal is intriguing and their genderfluidity adds depth to their personality. The narrative deals with issues of mystery, self-identity, and revenge. The ending provides a sense of closure, while leaving the door ajar for further adventures." ―VOYA Magazine

**About the Author**
Originally from Arkansas, Linsey Miller has previously worked as a crime lab intern, neuroscience lab assistant, and pharmacy technician. She is currently an MFA candidate represented by Rachel Brooks of Bookends Literary. Her debut novel MASK OF SHADOWS is the first in a fantasy duology out now (8/29/17) from Sourcebooks Fire. The sequel RUIN OF STARS is coming out August of 2018. She can be found writing about science and magic anywhere there is coffee. 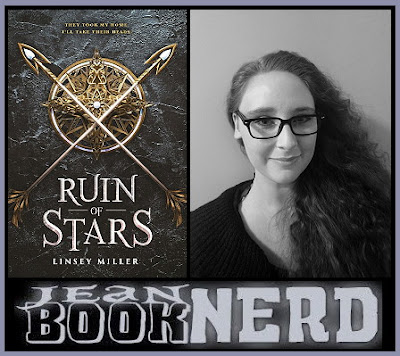