RELEASE DAY BLITZ: Too Hot To Handle by Jennifer Bernard

Today, we celebrate the release of Jennifer Bernard's Too Hot To Handle, book 8 in the Jupiter Point series!!! To celebrate, we have an exclusive excerpt and a cool blitz-wide giveaway to share!! Plus, take a look at what I thought about this read! So... Check it out and grab your copy now!!! 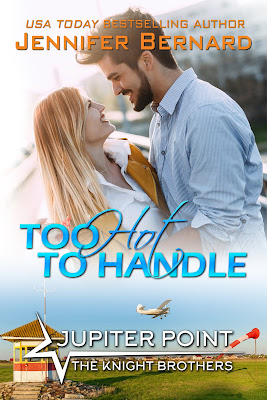 Synopsis:
Single father Kevin O’Donnell would do anything to give his daughter Holly a stable life—including leave the Air Force and take a job working at Knight and Day Flight Tours in charming Jupiter Point, California. After his wild daredevil past, he’s sworn off relationships until Holly turns eighteen. Just three more years. No problem; he’s got this under control. Until a chance encounter with a smart, sassy bombshell—who just happens to be his new boss’s sister.

Since her father’s unsolved murder, Cassie Knight has spent over a decade on the road with her mother, memories chasing the fragile woman from town to town…or so Cassie thought. Only after returning to Jupiter Point does she learn something—or someone—all too real triggered their life on the run. Now, with her brother closing in on their father’s killer, Cassie’s free to pursue her own happiness for the first time. Enter smart, sexy, funny Kevin O’Donnell.

Of course they’ll have to keep it light. There’s a big off-limits sign on Kevin’s heart, and Cassie’s ready to hit the road the minute her father’s killer is found. She can do light—no problem. But she didn’t count on their sizzling chemistry…Holly’s suddenly odd behavior…and a killer who’s more cunning than the Knight family ever suspected. Too hot to handle? There’s only one way to find out.

*Excerpt*
When a woman talked “sex,” he listened. But this time, Kevin wasn’t really sure he liked what he was hearing. “So you’re saying we take love off the table and focus entirely on sex, and that somehow that would keep my daughter out of it and avoid all potential complications at Knight and Day.”
“Exactly.” Cassie beamed a pleased smile up at him. Then a frown drew her eyebrows together. “You said ‘somehow’ in a very skeptical tone.”
“Sorry. I don’t mean to be skeptical. But—”
She poked his chest. “There you go again. That ‘but’ was also very skeptical.”
God, she was adorable. And that, right there, was the problem. “I’ve done the no-strings-sex thing. A lot. In fact, it’s all I’ve done since Sylvie and I split up. I know exactly how it works.”
Her eyelids flickered. “And so have I. In my case, it’s because I’ve moved around so much. There you go! We both already know the drill. It’s perfect.”
“It’s not perfect.”
“Okay, of course it’s not perfect. But we could make it work.”
“We couldn’t make it work,” he said firmly. Because as much as it pained him to do so, he had to nip this idea in the bud before she took it any further.
“Why not?” She glared at him in a blaze of indignation. “You think I’m not sophisticated enough, that I can’t separate sex and love? You’re totally wrong, I can do that, and—”
“That’s not the problem.” He splayed his hands across her lower back, feeling the micro-adjustments of the muscles along her spine. The silky material of her dress was like magic, the way it allowed him to feel her body underneath.
“So what’s the problem?” Despite her frown, she was so appealing, so alive in the deepening starlight, as if she herself were a star who had landed in his life.
“This.”
And finally, finally, he kissed her.
Not the almost-kiss of the first time they’d met, or the close call from Knight and Day. This was the real thing—and it felt as if he’d been waiting for this moment for years. As if kissing Cassie was like throwing himself down a waterfall, his entire being tumbling end over end, completely immersed in the moment. The warm champagne sweetness of her taste was everything, the eager opening of her mouth, the slide of her tongue, the oops of their teeth clicking against each other before they figured out exactly how to fit together.
A tight quiver ran through her body, and for a moment he wondered if he’d gone too fast, kissing her like this.
In the next moment, she linked her hands around his neck and lifted herself on tiptoe, pressing her breasts against him. He felt the points of her nipples against his chest, and thanked God once again for that miraculous dress that hid nothing from him. Skimming his hands up her sides, he cupped the soft swells of her breasts. The perfect, delicate curves triggered a pulse of lust inside him, but even more than that, a fierce sense of rightness. As if her body and his were meant for this moment, and for so many moments to come.


And that…that…was why her plan wouldn’t work.

Don't miss the previous titles in the Jupiter Point series!!! 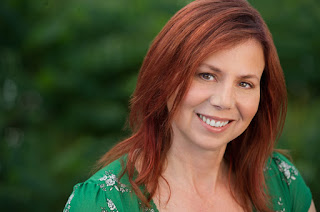 Jennifer Bernard is a USA Today bestselling author of contemporary romance. Her books have been called "an irresistible reading experience" full of "quick wit and sizzling love scenes." A graduate of Harvard and former news promo producer, she left big city life in Los Angeles for true love in Alaska, where she now lives with her husband and stepdaughters. She still hasn't adjusted to the cold, so most often she can be found cuddling with her laptop and a cup of tea. No stranger to book success, she also writes erotic novellas under a naughty secret name that she's happy to share with the curious.

A first for me to read a book written by Jennifer Bernard. Too Hot To Handle is the eighth book in the Jupiter Point series. I found this read to be a funny, dramatic, and creative story. Although this is part of a series, Too Hot To Handle can be read as a standalone novel. However, reading the previous titles in the series would probably give readers a better background "history" of characters. Well, that's just me. I have found that I understand or get to know characters better by reading the previous titles in the series. I think it helps bring the stories together. Otherwise, this still can be read as a standalone...haha!!!

Anyways, overall, Too Hot To Handle is a charming and funny story with a touch of suspense and drama. The story flowed evenly in which one can get lost in this quaint small town and its inhabitants.

Hmmm.... I think I'm going to have to start from book 1 in this Jupiter Point series, so I can get to know these characters even more. I would enjoy reading the next book as well.