Welcome to the Official Blog Tour for Julia Whelan's My Oxford Year!!! On our tour stop today, we have a promo/spotlight post with an exclusive excerpt!!! Not only that, today happens to be its book birthday!!! Check it out and grab your copy now!!! 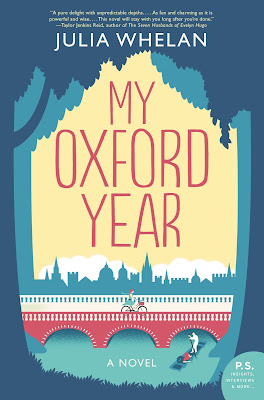 Synopsis:
American Ella Durran has had the same plan for her life since she was thirteen: Study at Oxford. At 24, she’s finally made it to England on a Rhodes Scholarship when she’s offered an unbelievable position in a rising political star’s presidential campaign. With the promise that she’ll work remotely and return to DC at the end of her Oxford year, she’s free to enjoy her Once in a Lifetime Experience. That is, until a smart-mouthed local who is too quick with his tongue and his car ruins her shirt and her first day.

When Ella discovers that her English literature course will be taught by none other than that same local, Jamie Davenport, she thinks for the first time that Oxford might not be all she’s envisioned. But a late-night drink reveals a connection she wasn’t anticipating finding and what begins as a casual fling soon develops into something much more when Ella learns Jamie has a life-changing secret.

Immediately, Ella is faced with a seemingly impossible decision: turn her back on the man she’s falling in love with to follow her political dreams or be there for him during a trial neither are truly prepared for. As the end of her year in Oxford rapidly approaches, Ella must decide if the dreams she’s always wanted are the same ones she’s now yearning for.

CHAPTER 1
While the chaffinch sings on the orchard bough
In England – now!

When I was thirteen I read an article in Seventeen Magazine called, “My Once in a Lifetime Experience,” and it was a personal account of an American girl’s year abroad at Oxford. The classes, the students, the parks, the pubs, even the chip shop (“pictured, bottom left”) seemed like another world. Like slipping through a wormhole into a universe where things were ordered and people were dignified and the buildings were older than my entire country. I suppose thirteen is an important age in every girl’s life, but for me, growing up in the middle of nowhere, with a family that had fallen apart? I needed something to hold onto. I needed inspiration. I needed hope. The girl who wrote the article had been transformed. Oxford had unlocked her life and I was convinced that it would be the key to mine.
So I made a plan: get to Oxford.
After going through more customs checkpoints, I follow signs for The Central Bus Terminal and find an automatic ticket kiosk. The “£” sign before the amount looks so much better, more civilized, more historical than the American dollar sign, which always seems overly suggestive to me. Like it should be flashing in sequential neon lights above a strip club. $ - $ - $. Girls! Girls! Girls!
The kiosk’s screen asks me if I want a discounted return ticket (I assume that means round trip), and I pause. My flight back to Washington is on June 11th, barely sixteen hours after the official end of Trinity term. I have no plans to return to the states before then, instead staying here over the two long vacations (in December and March) and traveling. In fact, I already have my December itinerary all planned. I purchase the return ticket, then cross to a bench to wait for the next bus.
My phone dings and I look down. An email from The Rhodes Foundation reminding me about the orientation tomorrow morning.
For whatever reason, out of all the academic scholarships in the world, most people seem to have heard of The Rhodes. It’s not the only prestigious scholarship to be had, but it’s the one that I wanted. Every year, America sends 32 of its most overachieving, uber-competitive, social-climbing, do-gooder nerds to Oxford. It’s mostly associated with geniuses, power-players, global leaders. Let me demystify this: to get a Rhodes, you have to be slightly unhinged. You have to have a stellar GPA, excel in multiple courses of study, be socially entrepreneurial, charity-minded, and athletically proficient (though the last time I did anything remotely athletic I knocked out Jimmy Brighton’s front tooth with a foul ball, so take that tenet with a grain of salt). I could have gone after other scholarships. There’s the Marshal, the Fulbright, the Watson, but the Rhodies are my people. They’re the planners.
The other finalist selected from my district (a Math/Econ/Classics triple-major and Olympic archer who had discovered that applying Game Theory to negotiations with known terrorists makes the intel 147% more reliable) told me, “I’ve been working toward getting a Rhodes since Freshman year.” To which I replied, “Me, too.” He clarified, “Of high school.” To which I replied, “Me, too.”
While, yes, the Rhodes is a golden ticket to Oxford, it’s also a built-in network and the means to my political future. It ensures that people who would have otherwise discounted me – this unconnected girl from the soybean fields of Ohio – will take a second, serious look. People like Gavin Brookdale.
Going after things the way I do, being who I am, has alienated my entire hometown and most of my extended family. My mom hadn’t gone to college and my dad had dropped out after two years because he’d thought it was more important to change the world than learn about it, and there I was, this achievement machine making everyone around it vaguely uncomfortable. She thinks she’s better than everyone else.
Honestly, I don’t. But I do think I’m better than what everyone, besides my dad, told me I was.

I wake up in a moment of panic when the bus I’d boarded back at Heathrow jerks to a stop, sending the book on my lap to the floor. Hastily retrieving it, I force my sleepy eyes to take in the view from the floor-to-ceiling window in front of me. I chose the seat on the upper level at the very front, wanting to devour every bit of English countryside on the way to Oxford. Then I slept through it.
Pushing through the fog in my head, I peer outside. A dingy bus stop in front of a generic cell phone store. I look for a street sign, trying to get my bearings. My info packet from the college said to get off at the Queens Lane stop on High Street. This can’t be it. I glance behind me and no one on the bus is moving to get off, so I settle back into my seat.
The bus starts up again, and I breathe deeply, trying to wake up. I jam the book into my backpack. I’d wanted to finish it before my first class tomorrow, but I can’t focus. I was too excited to eat or sleep on the plane. My empty stomach and all-nighter is catching up to me. The time difference is catching up to me. The last twelve years spent striving for this moment is catching up to me.
Inside my jacket pocket, my phone vibrates. I pull it out and see the same number from earlier. I take a deep breath and preemptively answer, “Gavin, listen, I was thinking, let’s do a trial period of, say, a month, and if you feel that I need to be there –”
“Not necessary."
My throat tightens. “Please, just give me thirty days to prove that –”
“It’s fine. I made it work. Just remember who comes first.”
Elation breaks through the fog. My fist clenches in victory and my smile reaches all the way to my temples. “Absolutely,” I say in my most professional voice. “Thank you so much for this opportunity. You won’t be disappointed.”
“I know that. That’s why I hired you. What’s your fee? FYI: there’s no money.”
There’s never any money. I tell him my fee anyway and we settle on something that I can live with. The Rhodes is paying my tuition and lodging and I get a small stipend for living expenses on top of that. I decide right then that what Gavin’s going to pay me will go directly into my travel budget.
“Now, go,” he says, “Have fun. You’ve clearly earned it. There’s a pub you should visit in the center of town. The Turf. See where one of your fellow Rhodes Scholars – a young William Jefferson Clinton – ‘didn’t’ inhale.”
“Ha, got it. Will do.”
“Just take your phone with you. Your phone is an appendage, not an accessory. Okay?”
I nod even though he can’t see me. “Okay. It’s a plan.” Just as I say this, the bus rounds a bend and there she is:
Oxford.
Beyond a picturesque bridge, the narrow two-lane road continues into a bustling main street, lined on each side by buildings with a hodge-podge of architectural styles, no room to breathe between them. Like the crowd at the finish line of a marathon, these buildings cheer me on, welcoming me to their city. Some are topped with sloped, slate roofs, others with battlements. Some of the larger buildings have huge wooden gates that look as if they were carved in place, a fusion of timeless wood and stone that steals my breath. Maybe those doors lead to some of the 38 individual Oxford colleges? Imagining it, dreaming of it all these years, doesn’t do it justice.
I look skyward. Punctuating the horizon are the tips of other ancient buildings, high-points of stone bordering the city like beacons.
“The City of Dreaming Spires,” I murmur to myself.
“Indeed it is,” Gavin says in my ear. I’d forgotten he was still on the line.
That’s what they call Oxford. A title well deserved. Because that means, before it was my dream or Seventeen Magazine girl’s dream, it was someone else’s dream as well. 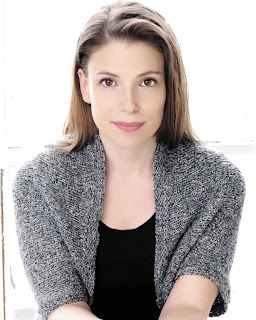 Julia Whelan is a screenwriter, lifelong actor, and award-winning audiobook narrator. She graduated with a degree in English and creative writing from Middlebury College and Oxford University. While she was in England, her flirtation with tea blossomed into a full-blown love affair, culminating in her eventual certification as a tea master.