Today, we are delighted to celebrate the release of Flightpath by Amber Addison. To celebrate, we have an exclusive excerpt AND a blitz-wide giveaway! And, for a limited time, Flightpath is on sale for only US $0.99 during release week only!!! So... Check it out and grab your copy now!!! 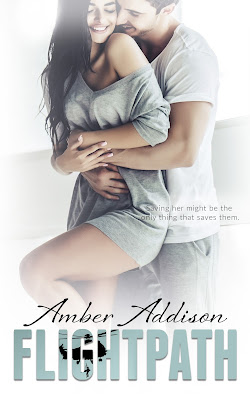 Synopsis:
Being married young isn't a thing of the past in Louisiana. And for Madelyn and Seth, it's a way of life. Except, no one prepared them for the skies ahead.

Moving to new places more times than either of them could count with new battles to fight at every stop, their Flightpath to happiness is turbulent.

Between Air Force Pararescue school, deployments, a baby, and the strain that military life can put on a family, they’ve discovered life has to fall apart in order to fall back together again.

When a terrorist attack puts Maddie's life in grave danger, their lives definitely fall apart, and Seth knows saving her might be the only thing that saves them.

Flightpath can be read as a standalone or as book one in The Love and Valor series. 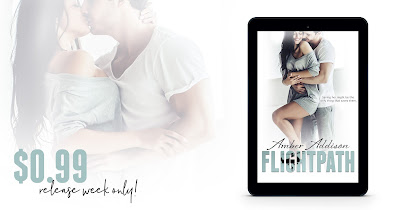 *Excerpt*
I was married to the most beautiful girl in the world, inside and out. We made it through basic training and a couple of specialized training schools, despite the time apart. I knew she was with me for the long haul. When we moved away from Texas and on to the next round of training, she never looked back. She squeezed my hand and told me as long as she had me and I had her everything would fall into place. It was always our thing. Maddie squeezing my hand or me squeezing hers. That unsaid reassurance both of us needed from time to time. When I was away from her, I of course missed her body—which she so graciously made sure I had plenty of pictures of—Thank you internet!—but I missed the way she squeezed my hand when I felt like I was struggling. I missed the way her eyes twinkled and turned super green when she saw me walking toward her. I missed the way her eyes turned dark green, almost brown when she was angry, and even how they turned blue when she was sad. I missed that gold ring she would get around her pupils on the “hazel days” as we called them. So yeah, I missed fucking her. But I also just missed her, and it was something not many of the guys understood.

The Pipeline, a seemingly endless chain of classes and schools across the country that I had to take over the next two years were easy in terms of our relationship, but hard as hell in terms of finishing each step and getting to the next. Maddie was able to be with me most of the time, and we got family housing. I felt like I was taking care of her while I was training. She kept writing. I didn’t want her to, at least not for money. I wanted her to write for fun. I swear she wrote all the time...unless she was watching those dumbass shows that make trauma medicine look like a joke. But she wrote a lot. Mostly random pieces in small online publications, but she said it gave her a sense of having something to do, and I couldn’t argue with that logic. It felt good to take care of my girl, though. So, I was always a bit torn but didn’t want to be that dude who looked like an asshole by telling his wife not to work. Growing up definitely wasn’t as easy as I thought it would be.

There was a lot riding on my success in the PJ program. Maddie and I were kind of living school to school for a few months. If I failed, I’d be out and back to trying to decide what I wanted to do in the service. I wasn’t the only one who’d be starting all over again. We both would be. And, because I’m stubborn, I’d try to be a PJ again. I would’ve kept training and trying. I wanted to be a PJ more than anything in my life. For the first time, I knew my purpose was to love my wife and save people’s lives. Maddie tried to take a break from school for me while we spent a little over a year in New Mexico where I finished my Pararescue EMT/Paramedic and my Recovery Specialist courses. I wouldn’t let her though. I mean, she could’ve told me no. Maddie had no qualms about being independent. She was really cute, always thinking she would get her way. She ended up enrolling in school for two semesters in New Mexico. I still claim that as a point in the win column, even though it was only a couple of semesters. After that, they shipped us off to a new base in Arizona. I never thought I’d call Arizona home. But it sure as fuck beat that humid shit I was so used to in Louisiana. Maddie reenrolled in college while we settled in, and I continued my training with my unit for an eventual deployment. I was officially a PJ, and Arizona was home, for now. I had my wife. I had my passion. I was pretty fucking happy. It did scare me how badly I wanted to see some action overseas, though, and it outright terrified Mads.

I was going to war.

My first deployment was really hard on everyone. Myself included. Maddie was about to graduate college and there was nothing I could do to stop my deployment. In the military, you don’t get to call the shots. I wanted to be there for her. I wanted to be there to hug her, to celebrate with her. I wanted to be the man I was supposed to be. But, maybe I was. Maybe the man I was supposed to be could do both. I was sure as fuck going to try. There was nothing I could do to properly portray how much I would miss her smile in my life every day. She’d never understand how much I would worry about her. I tried to tell her. I tried to show her—in some of the dirtiest ways possible—that I wasn’t going anywhere. That she was mine. I was hers. War wouldn’t tear us apart. We wouldn’t be one of those statistics. Plus, the Air Force would be in and out of this conflict in no time.

The problem with my plan was that we weren’t in and out of the conflict in no time. When I enlisted, I knew there was a chance I’d go to war. I didn’t think it was likely, but I realized it was a possibility. I wasn’t a fucking moron. I also knew there was a chance I could very well die serving my country. That was a sacrifice I decided I was willing to make without consulting with my new wife. I never asked her how she felt about it. Later, I would learn to regret never asking her opinion. She might’ve told me how much she’d hurt without me. My little copilot, having to pilot life on her own. She always did a fine job, but I know now that she always wished I was there to keep her on course.

But when I’m honest with myself? I would’ve chosen the same anyway. Saving lives? That’s a feeling I’m unable to describe. Saving kids, being the one to save my brothers and sisters at war, knowing I could save the life of an innocent civilian? That’s what I was supposed to be. That was what I was always supposed to be, even before I knew it. I just hoped I didn’t lose the only woman I would ever love over my need to do something for the greater good.
It had been nice stateside, pretending war wasn’t looming in the background. I never thought it would actually happen, not to an extent where I would need to be deployed. Wars were a thing of the past, right? But, when terrorists attacked Americans on United States soil, it was only a matter of time before we got called to serve. That whole thing happened rather quickly. I went from being a pretty carefree, happily married young man, the man that loved coming home to my wife every night and fucking her in ways that only I knew how. I equally loved holding her hand during a movie night on the couch or having her crawl into my lap and go to sleep as I played video games. Life was easy. It was good. Life was unreal.

The day before my deployment snuck up on me, and before I knew it, I was facing months without my girl. I knew we’d be okay. We’d made it through plenty of long distance periods. But each one hurt just as much as the first time, and as time went on, each one hurt as bad as the worst times. I was better at hiding it than she was. She was so free with her emotions. I had always been pretty open with my emotions around her, too. But the closer deployment came, the more I began to try to turn a lot of my emotions off. I knew my training, while it was the best around, was nothing compared to the wounds I’d be seeing. I knew learning to close a body bag would be nothing like actually doing it with a lifeless body inside of it. I knew what war did to my friends who had been and come back. I thought if I started to shut down before I left, I would definitely be okay. The problem with that plan? 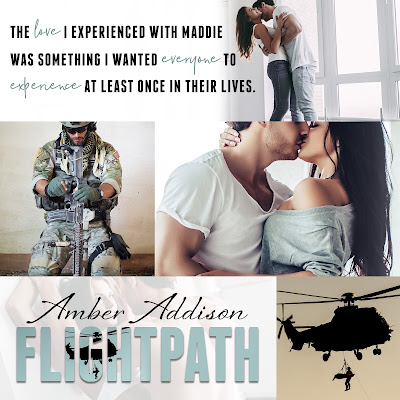 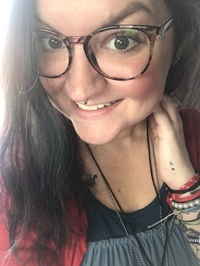 Amber Addison is a southern mama who writes about real life in small town USA. she enjoys writing contemporary romance that has it's ups and downs just like the trials that we face in our day to day. Love isn't perfect and she doesn't pretend that it is.

Amber writes anything from swoon worthy military guys to sexy soccer players. When she's not writing about hot guys and strong women, she's reading or cleaning up an endless trail of toys left behind by her dog and daughter or getting tattoos.