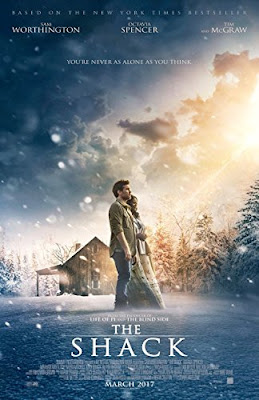 Based on the book by:
William Paul Young

Plot Synopsis:
Based on the New York Times best-selling novel, The Shack takes us on a father's uplifting spiritual journey. After suffering a family tragedy, Mack Phillips spirals into a deep depression causing him to question his innermost beliefs. Facing a crisis of faith, he receives a mysterious letter urging him to an abandoned shack deep in the Oregon wilderness. Despite his doubts, Mack journeys to the shack and encounters an enigmatic trio of strangers led by a woman named Papa. Through this meeting, Mack finds important truths that will transform his understanding of his tragedy and change his life forever.
source

O-M-G!!! I loved this movie! I was absolutely in tears from the start! I know, it's been a while. But, I am playing "catch up"... haha!!! Anyways, The Shack is an inspirational and spiritual story of a man's journey in finding and understanding his faith not just in himself, but with God. After a tragedy that affected him and his family, Mack finds himself in despair and redemption when he meets three enigmatic individuals.

The Shack was touching, heart-wrenching, and thought provoking that had me "ugly crying" from start to finish. Based on the novel written by William Paul Young, this film adaptation alone captured the emotional highs and lows of this man's depression. The cast was amazing and convincing in delivering the mysticism and the spirituality evoked by their characters.

I have watched this a few times, and each time, I broke me down into tears. Now, I have to read the book...haha!!!

Posted by Jasmine Albitos at 6:57 AM