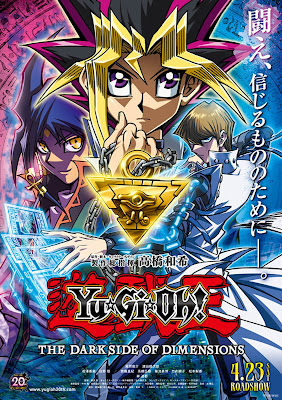 Synopsis:
Set six months after the events of the original Yu-Gi-Oh! manga, Yugi Muto and his friends are in their final year of high school and are talking about what they will do in the future. Meanwhile, Seto Kaiba has commissioned an excavation to retrieve the disassembled Millennium Puzzle from the ruins of the Millennium chamber. The item had previously housed the soul of his rival, Atem, whom he hopes to revive in order to settle their score. The excavation is interrupted by a mysterious man, who faces Kaiba in a game of Duel Monsters and steals two pieces of the recovered Puzzle. What is his ulterior motive? The stakes have never been higher; the rivalries never as fierce; the risks never so great.
source 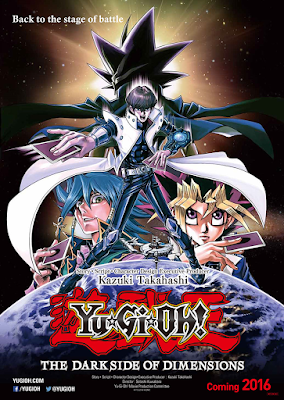 It was more like a simple action flick but worth it for any Yu-Gi-Oh! fans. ~( ^^)~ I don’t recommend Yu-Gi-Oh! The Dark Side of Dimensions to everyone. Sure; there were a few drawbacks I could nitpick at, such as the cliché good versus evil theme or some friendship message, but it wouldn’t be the Yu-Gi-Oh! I know and love without those elements. With so much hype since I attended the Yu-Gi-Oh! Panel at SDCC, the trailers that have been released since then, I can say I wasn’t disappointed. Although predictable, I chose to pay attention to the journey taken in this movie rather than the result.

This was beautiful as I felt that The Dark Side of Dimensions was good for closure. “How’s Atem doing on his afterlife throne? What’s everyone up to these days? What are they doing with their lives?” As an excited member of the audience and a fan of the Yu-Gi-Oh! Franchise since I was a kid, it was fulfilling to see the first-generation characters finish their last year in high school and seeing how they had matured, even if it was just by a little bit. It may not have been much in terms of character development but I felt it brought Duel Monsters full circle and allowed the gang to (completely) move on from Pharaoh Atem’s departure, thus pushing them to seriously look at their futures. Except for Kaiba… because he practically has it all and he still wants to duel Atem… and satisfy his wonderfully inflated ego. No sarcasm intended.

Its drawbacks lie with the “good versus evil” theme and I’m pretty sure everyone can figure out the ending. I wish the villain had more depth but what can you do? There’s only so much Kuwabara and Takahashi can put into a 2 hour and 15-minute movie. Nevertheless, I was smiling the entire time. Probably because I was too busy focusing on Kaiba and the clean-cut imagery. The CGI for monsters was also a nice touch because it added extra detail onto monsters that the original anime did not have. The Blue-Eyes White Dragon was actually White! That’s always bothered me when I watched the anime.

Yu-Gi-Oh! The Dark Side of Dimensions was fast paced with vibrant animation, fan favorite characters returning, awesome duels, brilliant voice acting, and kick ass new monsters. More like kick ass new monster designs, but it’s still beautiful. A note on the monsters: effects and special summons for days. And are they actually playing by the real game rules? Shocking. It kept me on the edge of my seat seeing what cards will be played next and what effects would benefit the turn player while causing the opponent disadvantage.

Posted by Mariah Bonifacio at 10:30 AM