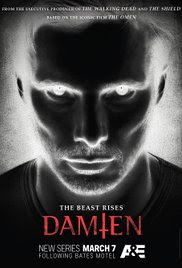 From the description, it seems like Damien is getting help from Detective Shay but we know that’s not going to happen. Damien starts his day in the psychiatric ward but is soon discharged. By now he has come to accept the idea of people worshipping him as the Antichrist. His blatant denial simmers down and he’s gathering up his own resolve to play the game. Damien faces his own demons and the one’s “loyal” to the Beast.

On the bystanders and cultists side, Detective Shay has finally let the religious truck hit him too, even though it’s only been seven episodes, and his son had to nearly die in the face of the Devil to do it. His anger just continues to seethe the more he finds out about Damien and those who have had a past with him. Damien has always been a bit of a loner and on occasion a grudge holding child; none of this adds up in his defense against Detective Shay. And it looks like we have gained a new piece on the board due to Shay’s investigation.

Even those loyal to the Beast can show fear of his wrath. John Lyon isn’t as trustworthy as Damien thinks thanks to his epiphany last episode and ends up meeting his wheelchair bound wife. Rutledge is a fluctuating character and it’s difficult to trust her. Barbara Hershey is doing a wonderful job as Ann Rutledge. She acted as an over-protective mother for the Antichrists’, turned fanatic, and into Damien’s loyalist. Not only does she try to look over Damien as a part of some cult, it appeared as though she really cared. Maybe the compensation for losing her husband and child was true.

And finally, we get to see what the Nun was up to. Sister Greta is very determined in her religious work. Although sent by the Vatican to investigate Damien Thorn and his miraculous recovery from his suicide attempt, she takes matters into her own hands and recruits aid from those closest to Damien while he pushes them away. She has made a believer out of Simone more so than before.

If Damien continues on his own path, maybe he could change his prophecy in his favor…? But the only person(s) he can count on are himself and… Rutledge? When people fear for their lives or do what they believe is right, what are they really like? Why would the Antichrist have a fighting chance in these circumstances? Divine intervention may not always be the most useful option.

Watch a preview of Episode 8 - "Here is Wisdom"

Posted by Mariah Bonifacio at 12:01 AM