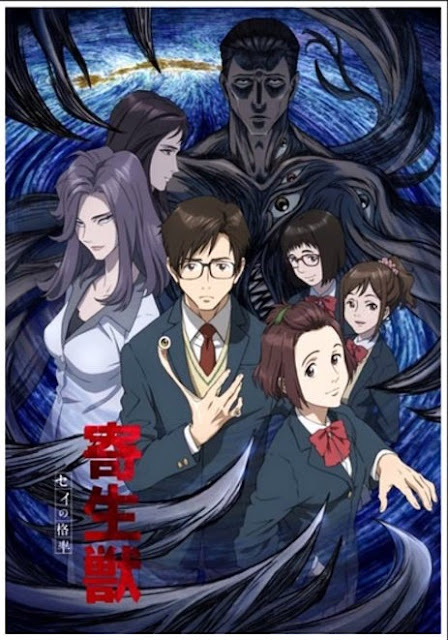 Plot Summary:
The 17-year-old Izumi Shinichi lives with his mother and father in a quiet neighborhood in Tokyo. One night, worm-like aliens called Parasytes invade Earth, taking over the brains of human hosts by entering through their ears or noses. One Parasyte attempts to crawl into Shinichi's ear while he sleeps, but fails since he is wearing headphones. The creature enters Shinichi's body by burrowing into his arm instead, taking over the boy's right hand. It adopts the name Migi, the Japanese word for “right.”

Because Shinichi was able to prevent Migi from traveling further up into his brain, both beings retain their separate intellect and personality. As the duo encounters other Parasytes, they capitalize on their strange situation and gradually form a strong bond, working together to survive. This gives them an edge in battling other Parasytes, who frequently attack the pair upon realization that Shinichi's human brain is still intact. Shinichi feels compelled to fight other Parasytes, who devour humans as food, while enlisting Migi's help.

“To be intelligent or to be human, why not an intelligent human being” but what exactly does it mean to be either human or intelligent? Parasyte: The Maxim isn’t just a simple blood and gore type of anime. It’s based off of a 1988 to 1995 manga series, where science fiction dominated popular culture and, similarly to the modern Tokyo Ghoul anime/manga, forces the viewer to take on psychological and moral questions.

Shinichi, the protagonist, is a normal high schooler and therefore relatable on many levels. He would’ve wanted a normal life, get hitched to his high school crush, and go on to college like a normal boy. But his chance encounter with the “alien” parasite, later to be named Migi, seemingly demolishes that in a few episodes that will get you hitched when episode two hits. The plot brings intrigue as to where these parasites came from and what their purpose in life is, since Migi failed to take over Shinichi’s brain, they have to figure these things out together as separate life forms in one body. (That’s a mouthful of a sentence.) A good hypothesis mentioned in the anime for the parasite’s existence it that they are Earth’s vaccine from the human “virus,” as their given objective upon entering a life form’s brain is to “Devour this species.” But perhaps that is not the case, since Migi and Shinichi can live without killing each other. Their time together is well spent, as the host and right hand form a strong, friendly bond with one another.

Ships were made and some had sunk; death is a must have, I suppose, to the horror genre. As Shinichi lives out his new life with parasites going around and killing people, he grows in both body and mind into a much more confident hero we’d be familiar with. His determination to use Migi in order to fight the parasites that kill humans for food makes him headstrong but not arrogant. While he did develop into somewhat of a shonen hero, he is put into dangerous situations that make him falter. He must then try to either view all life as precious thus connecting us to the belief of altruism or try to think logically to preserve his own safety. With Migi (literally) at his side, he had taken into consideration that maybe no lives are precious at all and when we die, there’s nothing left but a “meat bag.” On that note, Migi as a character was as adorable as a little kid. Blunt, curious, and intelligent, social etiquette flew over his head but being with Shinichi, it makes the viewer wonder if Migi developed a “humane” side… Despite his blatant denial of possible indications of sympathy or empathy by “logic-ing” his way out of being put on the spot. There are other characters but none worth mentioning. That is why they are not the protagonist(s). On the psychological level, Parasyte asks what it means to be human.

In terms of animation, it’s nothing new to scratch at if you’re used to watching action themed anime. But if Parasyte: The Maxim was animated during the time it was released as a manga, I don’t think it would have been as compelling as it is now. If you want a horror/gore anime, now is one of the best times to do it because of the detail required for the organs and blood drops. The opening and ending songs were on point to set the mood and give us some indications of what to expect from the anime. They both left me with feelings of hype, courage, hope for a better future with a sprinkle of sorrow, and in the end nostalgia. All in all, I would add Parasyte to my Top 20’s list; not very highly ranked but still better than other anime I’ve seen.

Posted by Mariah Bonifacio at 11:04 PM